Wetek Core Android Media Player Review. As a point of note, we had some very time-consuming problems with the initial update which we’re struggling to reason with. 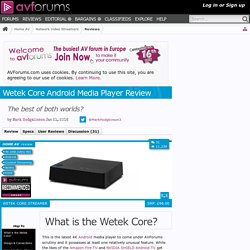 The update downloaded fine to the SD Card but, following reboot, the Core got stuck on the splash screen until we removed the power cord. Thereupon it would boot normally but without applying the update. After numerous attempts, we plugged the device in to a different TV and, lo and behold, the update went through immediately. The only slightly unusual circumstance of the unsuccessful attempts was that the Core was plugged in to the ARC port of the Samsung JU7000 4K TV which could potentially have caused an HDCP issue. Wetek have been notified and are investigating but, reassuringly, no other users have reported such an issue. Wetek Core (Ultra) HD Netflix, Amazon, YouTube, iPlayer etc. Unlocked TVStick: Electronics. Amazon Fire Stick with Kodi.

*If you are reading this you were probably given this Kodi User Guide by someone that set up your Amazon Fire Stick with Kodi. 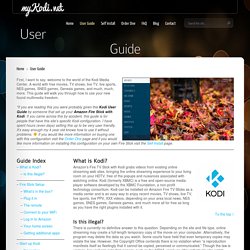 If you came across this by accident, this guide is for people that have this site’s specific Kodi configuration. I have spent hours (even days) setting this up to be very user friendly. It’s easy enough my 4 year old knows how to use it without problems. If you would like more information on buying one with this configuration visit the Order One page and if you would like more information on installing this configuration on your own Fire Stick visit the Self Install page. What is Kodi? Amazon’s Fire TV Stick with Kodi grabs videos from existing online streaming web sites, bringing the online streaming experience to your living room on your HDTV, free of the popups and nuisances associated with watching online. Kodi. Kodi® media center is an award-winning free and open source cross-platform software media player and entertainment hub for digital media for HTPCs (Home theater PCs). 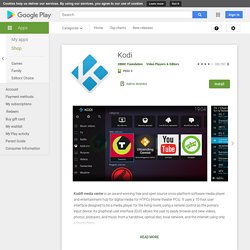 It uses a 10-foot user interface designed to be a media player for the living-room, using a remote control as the primary input device. Its graphical user interface (GUI) allows the user to easily browse and view videos, photos, podcasts, and music from a harddrive, optical disc, local network, and the internet using only a few buttons. IMPORTANT:The official Kodi version does not contain any content what so ever. This means that you should provide your own content from a local or remote storage location, DVD, Blu-Ray or any other media carrier that you own. Additionally Kodi allows you to install third-party plugins that may provide access to content that is freely available on the official content provider website. Estuary is the new standard skin and is designed to be fast and user friendly. The Media Center Blog: IP Security CAM image in XBMC using “Security CAM Overlay” add-on.

Firstly its the 1st of Jan 2014 today, so happy New Year to all my blog readers, hope you had a good one last night! 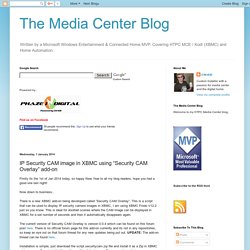 Now down to business.. There is a new XBMC add-on being developed called “Security CAM Overlay”. This is a script that can be used to display IP security camera images in XBMC, I am using XBMC Frodo V12.2 just so you know. This is ideal for doorbell scenes where the CAM image can be displayed in XBMC for a set number of seconds and then it automatically disappears again. The current version of Security CAM Overlay is version 0.0.4 which can be found on this forum post here. Installation is simple, just download the script.securitycam.zip file and install it as a Zip in XBMC add-ons area. Right click the add-on and select Add-on Settings Under the Camera section, in the Image URL field enter the URL of the JPG image of your IP camera and in the username and password fields enter those details to access the camera etc. Home Automation Summary. The Media Center Blog: IP Security CAM image in XBMC using “Security CAM Overlay” add-on.

Build your own home media center: Get started with Kodi. Setting up your own media center PC is a highly personal, quite in-depth task. 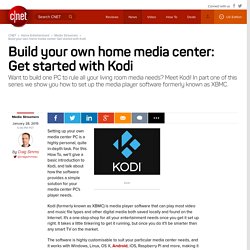 For this How To, we'll give a basic introduction to Kodi, and talk about how the software provides a simple solution for your media center PC's player needs. Kodi (formerly known as XBMC) is media player software that can play most video and music file types and other digital media both saved locally and found on the Internet. It's a one-stop-shop for all your entertainment needs once you get it set up right. It takes a little tinkering to get it running, but once you do it'll be smarter than any smart TV on the market.

The software is highly customisable to suit your particular media center needs, and it works with Windows, Linux, OS X, Android, iOS, Raspberry Pi and more, making it flexible no matter what computer you're basing your media center on. We'll be using the Windows version of the install in this article, although much of the advice is universal once the Kodi software itself is loaded. Basics. How to use kodi. 02.Kodi.Basics.