GMO Featherless Chickens by Leeanne Tang on Prezi. Featherless Chicken by Anna Thompson on Prezi. Featherless Chicken. Behold the featherless chicken, created by Scientists at the genetics faculty at the Rehovot Agronomy Institute near Tel Aviv, Israel.The idea behind the development of this naked bird is that it will create a more ‘convenient’ and energy efficient chicken which can live in warm countries where feathered chickens don’t do well and cooling systems are too expensive to be commonly affordable. Not growing feathers saves energy that can be used to grow meat. Critics say the feather-free chickens will suffer more than normal birds. Males might be unable to mate, because they cannot flap their wings, and “naked” chickens of both sexes are more susceptible to parasites, mosquito attacks and sunburn. The chicken is “disgusting”, says Joyce D’Silva of Compassion in World Farming.

“It’s a prime example of sick science and the suggestion that it would be an improvement for developing countries is obscene.” Featherless chicken creates a flap. By Emma Young Featherless chickens could be the future of mass poultry farming in warmer countries, says an Israeli geneticist who has created a bare-skinned “prototype”. 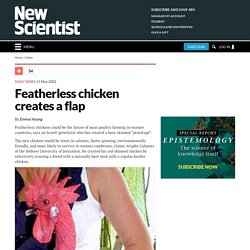 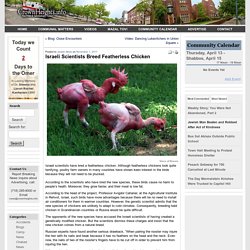 Although featherless chickens look quite terrifying, poultry farm owners in many countries have shown keen interest in the birds because they will not need to be plucked. According to the scientists who have bred the new species, these birds cause no harm to people’s heath. Moreover, they grow faster, and their meat is low fat.