Pressure point. The concept of pressure points is present in old school (17th century) Japanese martial arts and is claimed to have an even earlier history; in a 1942 article in the Shin Budo magazine, Takuma Hisa asserted the existence of a tradition attributing the first development of pressure-point attacks to Shinra Saburō Minamoto no Yoshimitsu (1045–1127).[2] Hancock and Higashi (1905) published a book which pointed out a number of vital points in Japanese martial arts.[3] Exaggerated accounts of pressure-point fighting appeared in Chinese Wuxia fiction and became known by the name of Dim Mak, or "Death Touch", in western popular culture in the 1960s. 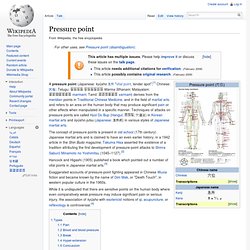 While it is undisputed that there are sensitive points on the human body where even comparatively weak pressure may induce significant pain or serious injury, the association of kyūsho with esotericist notions of qi, acupuncture, or reflexology is controversial.[4] Advanced Jeet Kune Do Martial Arts : The Way of the intercepting Fist in Jeet Kune Do Martial Arts. Jeet Kune Do free sparring. Monkey Kung Fu. Monkey Kung Fu, or Monkey Fist (猴拳), is a Chinese martial art which utilizes ape or monkey-like movements as part of its technique. There are a number of independently developed systems of monkey kung fu. Examples include Xingzhemen (行者門) named after the protagonist Sun Wukong of the popular Ming dynasty novel Journey to the West, Nanhouquan (南猴拳) or Southern Monkey Fist originating from the Southern Shaolin Temple as well as the better-known Da Sheng Pi Gua Men 大聖劈掛門 style of Hong Kong.

Origins[edit] Hou Quan[edit] The Hou Quan style from the Emei region, taught by the famous "Monkey King" Xiao Yingpeng and others, was also used as the basis for the modern wushu variant of monkey style (and monkey staff) that is often seen in demonstrations and competitions today. Da Sheng Men[edit] Da Sheng Men, or "Great Sage" Kung Fu, was developed near the end of the Qing dynasty (1911) by a fighter named Kou Si (Kau Sei) from a small village in Northern China. Zui Quan. Concept[edit] Zui quan is a category of techniques, forms and fighting philosophy that appear to imitate a drunkard's movements.[1] The postures are created by momentum and weight of the body, and imitation is generally through staggering and certain type of fluidity in the movements. 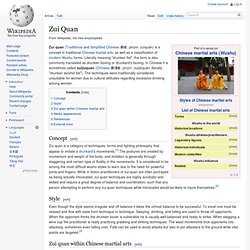 It is considered to be among the most difficult wushu styles to learn due to the need for powerful joints and fingers. While in fiction practitioners of zui quan are often portrayed as being actually intoxicated, zui quan techniques are highly acrobatic and skilled and require a great degree of balance and coordination, such that any person attempting to perform any zui quan techniques while intoxicated would be likely to injure themselves.[2] Vale tudo. Vale tudo (IPA: [ˈvali ˈtudu]; English: anything goes) are full-contact unarmed combat events, with a limited number of rules, that became popular in Brazil during the 20th century.[1] Vale Tudo has been considered a combat sport by some observers.[2] Vale Tudo uses techniques from many martial art styles, making it similar to modern mixed martial arts.

History[edit] 1920s to 1980s[edit] Fighting sideshows termed "Vale Tudo" became popular in Brazilian circuses during the 1920s.[3] Examples of such bouts were described in the Japanese-American Courier on October 4, 1928:[4] One report from São Paulo declares that Jiu Jitsu is truly an art and that in an interesting exhibition in the side tent to the big circus a Bahian of monstrous dimensions met his waterloo at the hands of a diminutive Japanese wrestler. From 1960 onwards, Vale Tudo remained a mostly underground subculture, with most fights taking place in martial arts dojos or small gymnasiums. 1990s to present[edit] Zen Do Kai. History[edit] The first Zen Do Kai dojo was opened at Elizabeth Street, Melbourne. 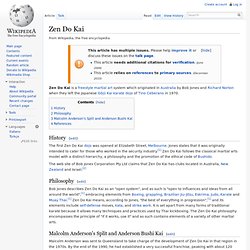 Jones states that it was originally intended to cater for those who worked in the security industry.[1] Zen Do Kai follows the classical martial arts model with a distinct hierarchy, a philosophy and the promotion of the ethical code of Bushido. The web site of Bob Jones Corporation Pty Ltd claims that Zen Do Kai has clubs located in Australia, New Zealand and Israel.[2] Jeet Kune Do. Jeet Kune Do, also Jeet Kun Do, and abbreviated JKD, is an eclectic and hybrid martial art system and philosophy of life founded by the martial artist Bruce Lee[2] (1940-1973) 1960 with simple and direct, or straightforward, movements and non-classical style. 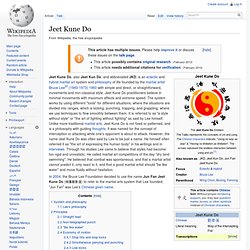 Jeet Kune Do practitioners believe in minimal movements with maximum effects and extreme speed. The system works by using different "tools" for different situations, where the situations are divided into ranges, which is kicking, punching, trapping, and grappling, where we use techniques to flow smoothly between them. It is referred to as "a style without style" or "the art of fighting without fighting" as said by Lee himself. Unlike more traditional martial arts, Jeet Kune Do is not fixed or patterned, and is a philosophy with guiding thoughts. It was named for the concept of interception or attacking while one's opponent is about to attack. The Wing Chun Federation. Applied Body Mechanics Ving Tsun - ABMVT.