Robert Gray (accountancy academic) He is best known as the world's most self-cited author in the academic study of Accounting having contributed hundreds of largely repetitive journal articles and to dozens of books over a twenty-five-year period. 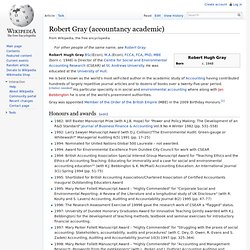 [citation needed] His particular speciality is in social and environmental accounting where along with Jan Bebbington he is one of the world's preeminent authorities. Gray was appointed Member of the Order of the British Empire (MBE) in the 2009 Birthday Honours.[1] 1982: Will Baxter Manuscript Prize (with A.J.B. Hope) for "Power and Policy Making: The Development of an R&D Standard" Journal of Business Finance & Accounting Vol.9 No.4 Winter 1982 (pp. 531–558)1992: Larry Sawyer Manuscript Award (with D.J. Collison)"The Environmental Audit: Green-gauge or Whitewash? " Source: "The Conceptual Framework: A Review Article" (with A.J.B. Robert Gray's St. Russell Means. Russell Charles Means (November 10, 1939 – October 22, 2012) was an American Oglala Lakota activist for the rights of Native American people and libertarian political activist. 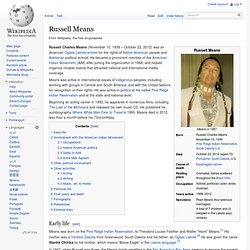 He became a prominent member of the American Indian Movement (AIM) after joining the organization in 1968, and helped organize notable events that attracted national and international media coverage. Means was active in international issues of indigenous peoples, including working with groups in Central and South America, and with the United Nations for recognition of their rights. He was active in politics at his native Pine Ridge Indian Reservation and at the state and national level. Friedrich Hayek. Hermann Hesse. Biography[edit] Family background[edit] 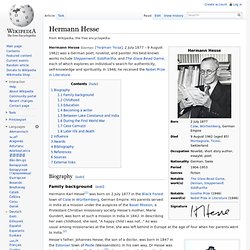 Isaiah Berlin. Sir Isaiah Berlin OM CBE FBA (6 June 1909 – 5 November 1997) was a Russian-British social and political theorist, philosopher and historian of ideas.[1] He was an essayist, conversationalist, raconteur, and lecturer.[1] In its obituary of the scholar, the Independent stated that "Isaiah Berlin was often described, especially in his old age, by means of superlatives: the world's greatest talker, the century's most inspired reader, one of the finest minds of our time [...] there is no doubt that he showed in more than one direction the unexpectedly large possibilities open to us at the top end of the range of human potential".[2] In 1932, at the age of 23, Berlin was elected to a prize fellowship at All Souls College, Oxford. 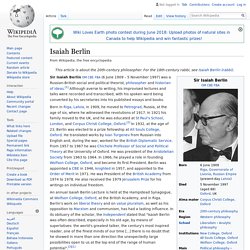 He translated works by Ivan Turgenev from Russian into English and, during the war, worked for the British Diplomatic Service. John von Neumann. John von Neumann (/vɒn ˈnɔɪmən/; December 28, 1903 – February 8, 1957) was a Hungarian and later American pure and applied mathematician, physicist, inventor, polymath, and polyglot. He made major contributions to a number of fields,[2] including mathematics (foundations of mathematics, functional analysis, ergodic theory, geometry, topology, and numerical analysis), physics (quantum mechanics, hydrodynamics, and fluid dynamics), economics (game theory), computing (Von Neumann architecture, linear programming, self-replicating machines, stochastic computing), and statistics.[3] He was a pioneer of the application of operator theory to quantum mechanics, in the development of functional analysis, a principal member of the Manhattan Project and the Institute for Advanced Study in Princeton (as one of the few originally appointed), and a key figure in the development of game theory[2][4] and the concepts of cellular automata,[2] the universal constructor, and the digital computer. . 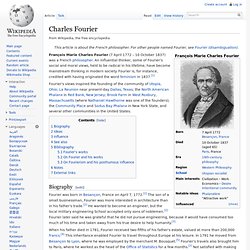 An influential thinker, some of Fourier's social and moral views, held to be radical in his lifetime, have become mainstream thinking in modern society. Fourier is, for instance, credited with having originated the word feminism in 1837.[1] Félix Guattari. Pierre-Félix Guattari (French: [ɡwataʁi] Biography[edit] Clinic of La Borde[edit] Guattari was born in Villeneuve-les-Sablons, a working-class suburb of north-west Paris, France.[1] He trained under (and was analysed by) the psychoanalyst Jacques Lacan in the early 1950s. 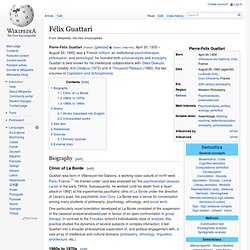 Subsequently, he worked (until his death from a heart attack in 1992) at the experimental psychiatric clinic of La Borde under the direction of Lacan's pupil, the psychiatrist Jean Oury. Antonio Gramsci. Antonio Gramsci (Italian: [anˈtɔːnjo ˈɡramʃi]; 22 January 1891 – 27 April 1937) was an Italian Marxist theoretician and politician. 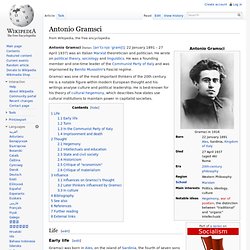 He wrote on political theory, sociology and linguistics. He was a founding member and one-time leader of the Communist Party of Italy and was imprisoned by Benito Mussolini's Fascist regime. Gramsci was one of the most important thinkers of the 20th century. He is a notable figure within modern European thought and his writings analyse culture and political leadership. Paul Goodman (writer) Paul Goodman (/ˈɡʊdmən/; September 9, 1911 – August 2, 1972) was an American novelist, playwright, poet and psychotherapist, although now best known as a social critic, anarchist philosopher, and public intellectual. 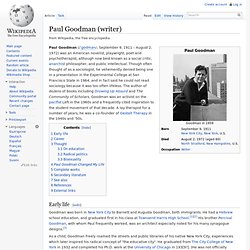 Though often thought of as a sociologist, he vehemently denied being one in a presentation in the Experimental College at San Francisco State in 1964, and in fact said he could not read sociology because it was too often lifeless. The author of dozens of books including Growing Up Absurd and The Community of Scholars, Goodman was an activist on the pacifist Left in the 1960s and a frequently cited inspiration to the student movement of that decade. Denis Diderot. Denis Diderot (French: [dəni didʁo]) (5 October 1713 – 31 July 1784) was a French philosopher, art critic and writer. 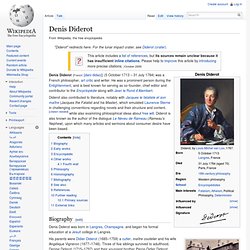 He was a prominent person during the Enlightenment, and is best known for serving as co-founder, chief editor and contributor to the Encyclopédie along with Jean le Rond d'Alembert. Diderot also contributed to literature, notably with Jacques le fataliste et son maître (Jacques the Fatalist and his Master), which emulated Laurence Sterne in challenging conventions regarding novels and their structure and content,[citation needed] while also examining philosophical ideas about free will. Diderot is also known as the author of the dialogue Le Neveu de Rameau (Rameau's Nephew), upon which many articles and sermons about consumer desire have been based. Jean-Paul Sartre. His work has also influenced sociology, critical theory, post-colonial theory, and literary studies, and continues to influence these disciplines. 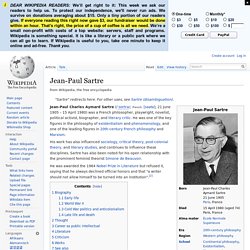 Sartre has also been noted for his open relationship with the prominent feminist theorist Simone de Beauvoir. He was awarded the 1964 Nobel Prize in Literature but refused it, saying that he always declined official honors and that "a writer should not allow himself to be turned into an institution".[2]

Herbert Marcuse. Herbert Marcuse (German: [maʁˈkuːzə]; July 19, 1898 – July 29, 1979) was a German philosopher, sociologist, and political theorist, associated with the Frankfurt School of critical theory. Born in Berlin, Marcuse studied at the universities of Berlin and then at Freiburg, where he received his Ph.D.[2] He was a prominent figure in the Frankfurt-based Institute for Social Research – what later became known as the Frankfurt School. He was married to Sophie Wertheim (1924–1951), Inge Neumann (1955–1972), and Erica Sherover (1976–1979).[3][4][5] Active in the United States after 1934, his intellectual concerns were the dehumanizing effects of capitalism and modern technology.

He offers a powerful critique of modern industrial societies and the material and entertainment cultures they manufacture, arguing that they use new forms of social control to dupe the masses into accepting the ways things are.[6] Peter McLaren. Peter McLaren "McLaren's work is a passionate challenge to all forms of education that limit rather than enhance the project of human emancipation. Douglas Kellner. Douglas Kellner (born 1943) is a "third generation" critical theorist in the tradition of the Frankfurt Institute for Social Research, or Frankfurt School.

Hans Albert. Hans Albert Hans Albert (born February 8, 1921) is a German philosopher. Born in Cologne, he lives in Heidelberg. His fields of research are Social Sciences and General Studies of Methods. He is a critical rationalist, giving special attention to rational heuristics. He is a strong critic of the continental hermeneutic tradition coming from Heidegger and Gadamer. Karl Popper. Karl Raimund Popper CH FBA FRS[4] (28 July 1902 – 17 September 1994) was an Austrian-British[5] philosopher and professor at the London School of Economics.[6] He is generally regarded as one of the greatest philosophers of science of the 20th century.[7][8] Popper is known for his rejection of the classical inductivist views on the scientific method, in favour of empirical falsification: A theory in the empirical sciences can never be proven, but it can be falsified, meaning that it can and should be scrutinized by decisive experiments.

If the outcome of an experiment contradicts the theory, one should refrain from ad hoc manoeuvres that evade the contradiction merely by making it less falsifiable. Murray Bookchin. Michel Foucault. Alan Watts. Rupert Sheldrake. Alfred Rupert Sheldrake is an English author,[3] public speaker,[4] and researcher in the field of parapsychology,[5] known for his "morphic resonance" concept.[6] He worked as a biochemist and cell biologist at Cambridge University from 1967 to 1973[3] and as principal plant physiologist at the International Crops Research Institute for the Semi-Arid Tropics until 1978.[7]