My thoughts on the 3 hr. dosing schedule at Chelation: Andy Cutler Protocol (MessageID: 1848027) This is my long-winded take on the three hour dosing schedule that Andy Cutler recommends after extensive research into ALA and mercury chelation, I've come to conclude that ALA most definitely is a mercury chelator and helps to heal the body of the effects of mercury However! 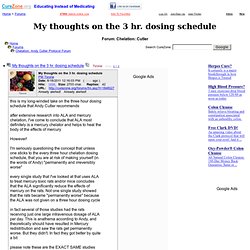 I'm seriously questioning the concept that unless one sticks to the every three hour chelation dosing schedule, that you are at risk of making yourself (in the words of Andy) "permanently and irreversibly worse" every single study that I've looked at that uses ALA to treat mercury toxic rats and/or mice concludes that the ALA significantly reduce the effects of mercury on the rats. Not one single study showed that the rats became "permanently worse" because the ALA was not given on a three hour dosing cycle in fact several of those studies had the rats receiving just one large intravenous dosage of ALA per day. Furthermore, the half-life of ALA in the body is about 30 minutes. Mercury and polydipsia/ renal failure - plea for help at Mercury Forum (MessageID: 1884338) Pretty much all of the symptoms you listed are symptoms of a benign parathyroid tumor (99% chance it is benign) I know this as I recently found out I may have one due to the results of a pth hormones blood test and then seeing I had several high pth test results when going back into my blood work from the past. 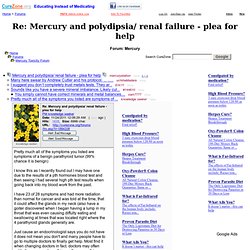 I have 23 of 28 symptoms and had more radiation than normal for cancer and was told at the time, that it could affect the glands in my neck (also have a goiter discovered when I began having a lump in my throat that was even causing diffulty eating and swallowing at times that was located right where the 4 parathyroid glands generally are. Just cause an endocrinologist says you do not have it does not mean you don't and many people have to go to multiple doctors to finally get help. Most find it when changing doctors in fact. doctors may often not believe you and o nothing or the wrong things or go down the wrong track. Very frustrating. Here are the symptoms and here. Removed fillings months ago, question about candida flare-ups and die-off at Candida Support Forum (MessageID: 1858686) I'll try to keep this short and not go into tremendous complicated detail. 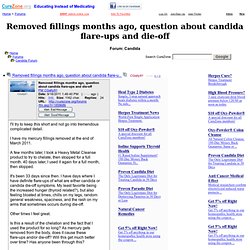 I have my mercury fillings removed at the end of March 2011. A few months later, I took a Heavy Metal Cleanse product to try to chelate, then stopped for a full month. 40 days later, I used it again for a full month, then stopped. Chelating from Mercury at Mercury Forum (MessageID: 1847853) DMPS vs DMSA, safety? at Mercury Forum (MessageID: 1880368) Re: dmpsbackfire.com/ Cutler has mentioned this site in his yahoo posts. 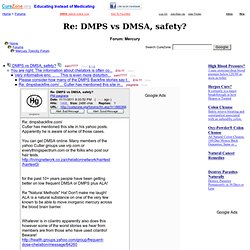 Apparently he is aware of some of those cases. You can get DMSA online. Many members of the yahoo Cutler groups use vrp.com or everythingspectrum.com or the folks who post our hair tests. for the past 10+ years people have been getting better on low frequent DMSA or DMPS plus ALA! Re "Natural Methods" Ha! Whatever is in cilantro apparently also does this however some of the worst stories we hear from members are from those who have used cilantro! Cutler laughs at the use of chlorella. DMSA is FDA approved for use in kids who have lead. In the yahoo groups the sickest members seem to do reasonably well on DMPS. The ultimate goal is not to get rid of the HMs; it is to recover our health. Joe. Do not take extra copper! at Adrenal Fatigue Support Forum (MessageID: 1891233) 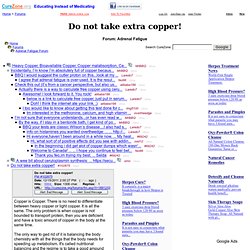 There is no need to differentiate between heavy copper or light copper. It is all the same. The only problem is when copper is not bounded to transport protein, then you are deficient and have a toxic amount of copper in the body at the same time. The only way to ged rid of it is balancing the body chemistry with all the things that the body needs for speeding up metabolism. My Health Nightmare & Recovery at Candida Support Forum (MessageID: 1875147) Heavy Copper, Bioavailable Copper, Copper malabsorption, Ceruloplasmin Insufficiency at Adrenal Fatigue Support Forum (MessageID: 1890937) Hey all, I've not been around here in a long while because I found that getting to the root of my problem was being somewhat obscured. 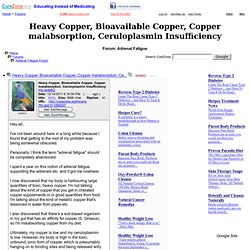 Personally, I think the term "adrenal fatigue" should be completely abandoned. I spent a year on this notion of adrenal fatigue, supporting the adrenals etc. and it got me nowhere. Copper ... hasn't turned up in hair mineral analysis at Adrenal Fatigue Support Forum (MessageID: 1890719) Hello everybody, This is such a fantastic group and has been such a help to me over the years as I have battled CFS, and in my recent queries about copper. 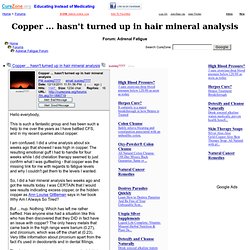 I am confused. Roundup herbicide in Soil Effects by YourEnchantedGardener. Constant fatigue. Getting desperate, please help! at Ask CureZone Community (MessageID: 1844333) Results from hair analysis test at Candida Support Forum (MessageID: 1876412) Now reading that you live in Japan kind of worries me about the uranium level in your body. 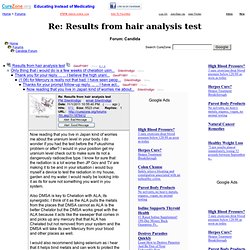 I do wonder if you had the test before the Fukushima problem or after? I would in your position get my uranium level check out to make sure its not a dangerously radioactive type. I know for sure that the radiation is a lot worse then JP Gov and TV are making it to be and in your situation i would buy myself a device to test the radiation in my house, garden and my water.

I would really be looking into it as its for sure not something you want in you system. Also DMSA is key to Chelation with ALA, its synergistic. I would also recommend taking selenium as i hear that it helps bind metals and can work to protect the liver. Thread: Mysterious chronic illness stemming from yohimbe ingestion at The Truth in Medicine (ThreadID: 1723141) Hi Alex, Thanks a lot for your response! 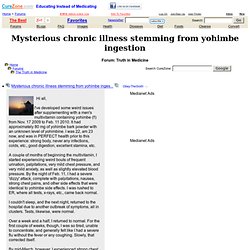