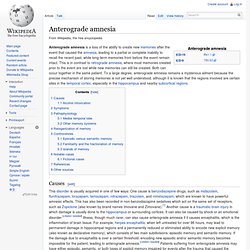 This is in contrast to retrograde amnesia, where most memories created prior to the event are lost while new memories can still be created. Both can occur together in the same patient. To a large degree, anterograde amnesia remains a mysterious ailment because the precise mechanism of storing memories is not yet well understood, although it is known that the regions involved are certain sites in the temporal cortex, especially in the hippocampus and nearby subcortical regions. Causes[edit] This disorder is usually acquired in one of few ways: One cause is benzodiazepine drugs, such as midazolam, flunitrazepam, lorazepam, temazepam, nitrazepam, triazolam, and nimetazepam, which are known to have powerful amnesic effects. 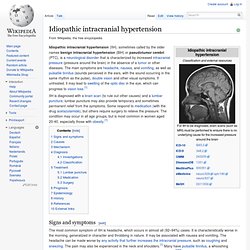 The main symptoms are headache, nausea, and vomiting, as well as pulsatile tinnitus (sounds perceived in the ears, with the sound occurring in the same rhythm as the pulse), double vision and other visual symptoms. If untreated, it may lead to swelling of the optic disc in the eye, which can progress to vision loss.[1] IIH is diagnosed with a brain scan (to rule out other causes) and a lumbar puncture; lumbar puncture may also provide temporary and sometimes permanent relief from the symptoms. Some respond to medication (with the drug acetazolamide), but others require surgery to relieve the pressure. Cerebral venous sinus thrombosis. Cerebral venous sinus thrombosis (CVST) is the presence of thrombosis (a blood clot) in the dural venous sinuses, which drain blood from the brain. 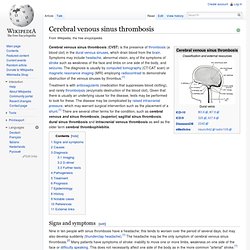 Symptoms may include headache, abnormal vision, any of the symptoms of stroke such as weakness of the face and limbs on one side of the body, and seizures. The diagnosis is usually by computed tomography (CT/CAT scan) or magnetic resonance imaging (MRI) employing radiocontrast to demonstrate obstruction of the venous sinuses by thrombus.[1] Treatment is with anticoagulants (medication that suppresses blood clotting), and rarely thrombolysis (enzymatic destruction of the blood clot). Given that there is usually an underlying cause for the disease, tests may be performed to look for these. Papilledema. Papilledema (or papilloedema) is optic disc swelling that is caused by increased intracranial pressure. 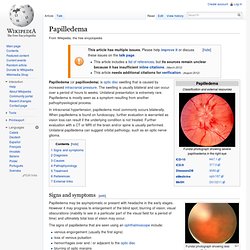 The swelling is usually bilateral and can occur over a period of hours to weeks. Unilateral presentation is extremely rare. Papilledema is mostly seen as a symptom resulting from another pathophysiological process. In intracranial hypertension, papilledema most commonly occurs bilaterally. When papilledema is found on fundoscopy, further evaluation is warranted as vision loss can result if the underlying condition is not treated. 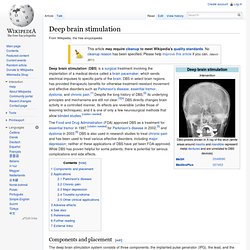 DBS in select brain regions has provided therapeutic benefits for otherwise-treatment-resistant movement and affective disorders such as Parkinson's disease, essential tremor, dystonia, and chronic pain.[1] Despite the long history of DBS,[2] its underlying principles and mechanisms are still not clear.[3][4] DBS directly changes brain activity in a controlled manner, its effects are reversible (unlike those of lesioning techniques), and it is one of only a few neurosurgical methods that allow blinded studies. [citation needed] Components and placement[edit] All three components are surgically implanted inside the body. Lead and extension implantation may take place under local anesthesia or with the patient under general anesthesia ("asleep DBS"). Vagus nerve stimulation. Vagus nerve stimulation (VNS) is an adjunctive treatment for certain types of intractable epilepsy and treatment-resistant depression. 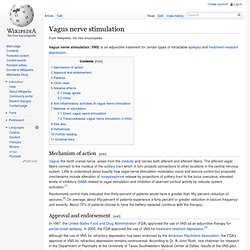 Temporal lobe epilepsy. Ketogenic diet. This article is about a dietary therapy for epilepsy. 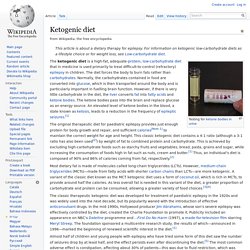 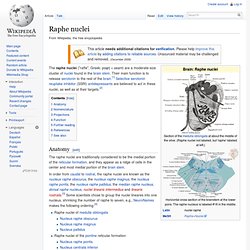 Nomenclature[edit] The Latin names commonly used for most of these nuclei are grammatically incorrect. Latin grammar would require nucleus raphe magnus to be changed to nucleus raphes magnus, for example. Terminologia Anatomica, the main authority on anatomical names, uses the "raphes" form, and so do some scientific papers, but in recent years more than 95% of scientific publications have continued to use the "raphe" form, as this article does.

Projections[edit] These nuclei interact with almost every pertinent portion of the brain, but only a few of them have specifically independent interaction. Overall, the caudal raphe nuclei, including the nucleus raphe magnus, nucleus raphe pallidus and nucleus raphe obscurus, all project towards the spinal cord and brain stem. Hippocampus. MRI coronal view of a hippocampus shown in red The hippocampus (named after its resemblance to the seahorse, from the Greek hippos meaning "horse" and kampos meaning "sea monster") is a major component of the brains of humans and other vertebrates. 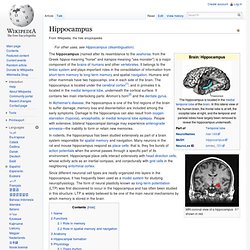 It belongs to the limbic system and plays important roles in the consolidation of information from short-term memory to long-term memory and spatial navigation. Humans and other mammals have two hippocampi, one in each side of the brain. The hippocampus is located under the cerebral cortex[1]; and in primates it is located in the medial temporal lobe, underneath the cortical surface.

It contains two main interlocking parts: Ammon's horn[2] and the dentate gyrus. In rodents, the hippocampus has been studied extensively as part of a brain system responsible for spatial memory and navigation. Declarative memory. Declarative memory (sometimes referred to as explicit memory) is one of two types of long-term human memory. 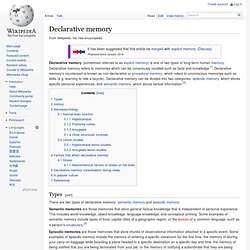 Suprachiasmatic nucleus. The suprachiasmatic nucleus or nuclei, abbreviated SCN, is a tiny region located in the hypothalamus, situated directly above the optic chiasm. It is responsible for controlling circadian rhythms. The neuronal and hormonal activities it generates regulate many different body functions in a 24-hour cycle, using around 20,000 neurons.[1] According to a study conducted on rats, the SCN tends to diminish in size with age.[2] Dorsal raphe nucleus. Locus coeruleus. Paraventricular nucleus of hypothalamus. The paraventricular nucleus (PVN, PVA, or PVH) is a neuronal nucleus in the hypothalamus.

It contains multiple subpopulations of neurons that are activated by a variety of stressful and/or physiological changes. Many PVN neurons project directly to the posterior pituitary where they release oxytocin or vasopressin into the general circulation. Other PVN neurons control various anterior pituitary functions, while still others directly regulate appetite and autonomic functions in the brainstem and spinal cord. Brodmann area 25. Sagittal MRI slice with highlighting indicating location of the subgenual anterior cingulate cortex. Cytochrome P450.