CHELATION THERAPY. By Lawrence Wilson, MD © February 2014, The Center For Development Chelation therapy is the use of specific substances, either synthetic chemicals or natural ones, to remove a few toxic metals from a person’s body. 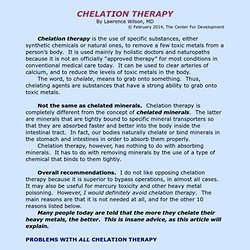 It is used mainly by holistic doctors and naturopaths because it is not an officially “approved therapy” for most conditions in conventional medical care today. It can be used to clear arteries of calcium, and to reduce the levels of toxic metals in the body. The word, to chelate, means to grab onto something. Not the same as chelated minerals. Chelation therapy, however, has nothing to do with absorbing minerals. Overall recommendations. Many people today are told that the more they chelate their heavy metals, the better.

These include the following: 1. The other problem with removing some essential minerals is that it further unbalances or upsets the body chemistry, often in ways that are difficult to repair. NUTRITION AND MENTAL HEALTH. By Lawrence Wilson, MD © Decmber 2009, The Center For Development Nutritional imbalances play a critical role in mental as well as physical health. 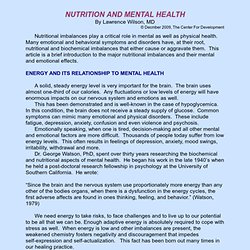 Many emotional and behavioral symptoms and disorders have, at their root, nutritional and biochemical imbalances that either cause or aggravate them. This article is a brief introduction to the major nutritional imbalances and their mental and emotional effects. A solid, steady energy level is very important for the brain. This has been demonstrated and is well-known in the case of hypoglycemica. By Lawrence Wilson, MD. By Lawrence Wilson, MD © March 2013, The Center For Development The human intestinal tract is a very complex internal environment. 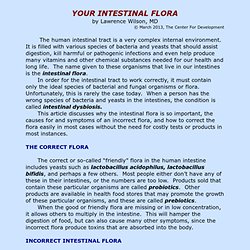 It is filled with various species of bacteria and yeasts that should assist digestion, kill harmful or pathogenic infections and even help produce many vitamins and other chemical substances needed for our health and long life. The name given to these organisms that live in our intestines is the intestinal flora. In order for the intestinal tract to work correctly, it must contain only the ideal species of bacterial and fungal organisms or flora. This article discusses why the intestinal flora is so important, the causes for and symptoms of an incorrect flora, and how to correct the flora easily in most cases without the need for costly tests or products in most instances. 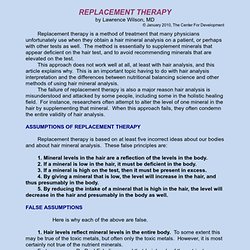 The method is essentially to supplement minerals that appear deficient on the hair test, and to avoid recommending minerals that are elevated on the test. This approach does not work well at all, at least with hair analysis, and this article explains why. This is an important topic having to do with hair analysis interpretation and the differences between nutritional balancing science and other methods of using hair mineral analysis. The failure of replacement therapy is also a major reason hair analysis is misunderstood and attacked by some people, including some in the holistic healing field. Replacement therapy is based on at least five incorrect ideas about our bodies and about hair mineral analysis. By Lawrence Wilson, MD. 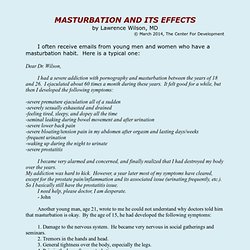 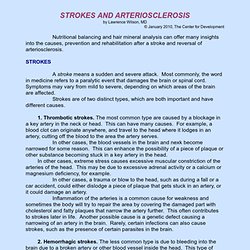 A stroke means a sudden and severe attack. Most commonly, the word in medicine refers to a paralytic event that damages the brain or spinal cord. Symptoms may vary from mild to severe, depending on which areas of the brain are affected. Strokes are of two distinct types, which are both important and have different causes. By Lawrence Wilson, MD. By Lawrence Wilson, MD © April 2013, The Center For Development Gluten intolerance, also called celiac disease or celiac sprue, is a common and debilitating condition affecting about 1 in every 133 people in America, and probably somewhat fewer around the world. 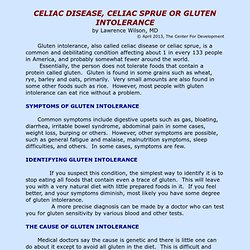 Essentially, the person does not tolerate foods that contain a protein called gluten. Gluten is found in some grains such as wheat, rye, barley and oats, primarily. Very small amounts are also found in some other foods such as rice. Common symptoms include digestive upsets such as gas, bloating, diarrhea, irritable bowel syndrome, abdominal pain in some cases, weight loss, burping or others. If you suspect this condition, the simplest way to identify it is to stop eating all foods that contain even a trace of gluten.

A more precise diagnosis can be made by a doctor who can test you for gluten sensitivity by various blood and other tests.