If You Want To Be Awesome At Emails, Add Yesware To Your Gmail Today. One of the biggest problems in business development, partnerships, and sales is managing your pipeline. 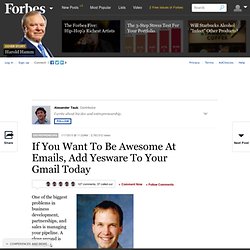 A close second is managing, tracking, and keep up to date with your email inbox. I’ve tried many tools to help both issues but each has had its shortcomings. PrepWork - We make you look good. MobileDay – One-Touch Dial Into Any Conference Call On Your iPhone Or Android. Xactly: Incentive Compensation, Sales Performance Management. Ghost: Just a Blogging Platform by John O'Nolan. Ten websites that teach coding and a bunch of other things. 7 Must-Have (Free) Mobile Apps to do Your Job Better.

Indochino suits up with $13M for custom-made mens clothing. Getting a man to shop can be a difficult task. 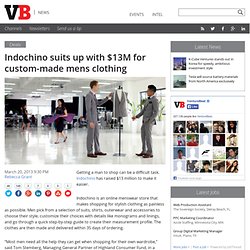 Indochino has raised $13 million to make it easier. Indochino is an online menswear store that makes shopping for stylish clothing as painless as possible. Men pick from a selection of suits, shirts, outerwear and accessories to choose their style, customize their choices with details like monograms and linings, and go through a quick step-by-step guide to create their measurement profile. The clothes are then made and delivered within 35 days of ordering. InnovateCV innovates the resume, the cover letter, and the application … right out of existence. The three trusty standbys of jobs searches, resumes, applications, and covering letters, may soon be a thing of the past. 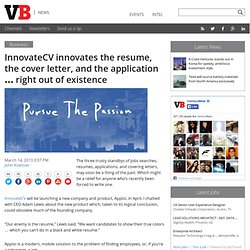 Which might be a relief for anyone who’s recently been forced to write one. InnovateCV will be launching a new company and product, Apploi, in April. I chatted with CEO Adam Lewis about the new product which, taken to its logical conclusion, could obsolete much of the founding company. “Our enemy is the resume,” Lewis said. Dropbox buys Mailbox, the email app we’re already sick of hearing about. File-sharing company Dropbox has acquired Mailbox, the email management app everyone’s been drooling over for the past few weeks all over the Internet. 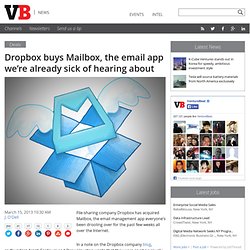 In a note on the Dropbox company blog, co-founders Arash Ferdowsi and Drew Houston wrote that they were as obnoxiously besotted with the idea of the app as the rest of y’all. “When we discovered Mailbox, we fell in love — it was simple, delightful, and beautifully engineered,” they wrote. “After spending time with [Mailbox parent company Orchestra founders] Gentry [Underwood], Scott [Cannon], and the team, it became clear that their calling was the same as ours at Dropbox — to solve life’s hidden problems and re-imagine the things we do every day. We all quickly realized that together we could save millions of people a lot of pain.” If you’d like to get an idea of what the aforementioned nerds are panting about, here’s a demo clip.

Where is everybody? Swarmly shows you, on your phone, in real time. Swarmly founder Marco De Nichilo has built an app that lets you find out where the hot parties are — simply by seeing where people are, in real time. 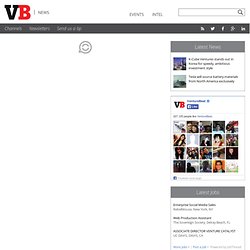 It’s a deceptively simple idea: Everyone using the app shows up as a blue dot on a real-time map. Want to know where the crowd is gathering? Fire up the app, look at the map, and watch the little dots move around. After 1.5M downloads, Pokki’s Start menu for Windows 8 gets a slick refresh. Apparently a lot of people miss having the Start menu in Windows 8. 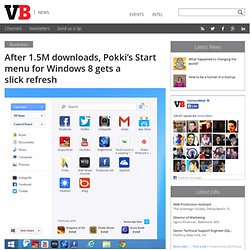 SweetLabs’ Pokki app, which adds a Start menu and app launcher to the Windows 8 OS, has attracted 1.5 million downloads to date. Pokki for Windows 8 launched back in mid-October and hit 500,000 downloads on Dec. 20. In just a few weeks, the app has tripled in popularity with 1.5 million downloads. And people are using it — SweetLabs said that users open the Start menu an average of 10 times a day. The Leader in Social Marketing, Social Analytics and Social ROI.

The future is now: 10 startups leading the way in ‘big data’ How can big data and smart analytics tools ignite growth for your company? 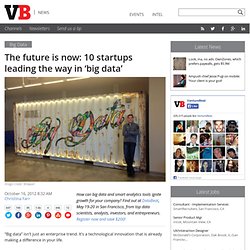 Find out at DataBeat, May 19-20 in San Francisco, from top data scientists, analysts, investors, and entrepreneurs. Register now and save $200! “Big data” isn’t just an enterprise trend. It’s a technological innovation that is already making a difference in your life. Police are mixing crime data and sociological information to anticipate incidences of crime. “Big Data” is one of the main themes of CloudBeat 2012, VentureBeat’s upcoming conference highlighting real cases of revolutionary cloud adoption. We believe it’s time to cut through the hype and show you some cool companies that use big data to further research in the fields of healthcare, law, government, and education. We narrowed it down to some ground-breaking favorites who helped define the field. Meet our inaugural list of big data companies that are exploiting data in ways that you wouldn’t expect. InfoArmy wants YOU to create business intelligence reports. How can big data and smart analytics tools ignite growth for your company? 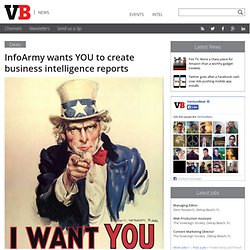 Find out at DataBeat, May 19-20 in San Francisco, from top data scientists, analysts, investors, and entrepreneurs. Register now and save $200! The army tells recruits to “be all that you can be.” While in the military context, this statement relates to physical prowess and leadership skills, InfoArmy applies the same principal to business intelligence. InfoArmy is a marketplace where researchers, analysts, or anyone with the requisite skill set can make extra money by writing competitive intelligence reports. These fightin’ words come from chief executive Jim Fowler, a veteran of the BI industry who is using his training, experience, and expertise to strike fear into the heart of the enemy.