To Lead You Must Serve. HBR's 10 Must Reads Series Boxed Set (6 Books) Toolkit: The CIO's First 100 Days. Already have a Gartner account? 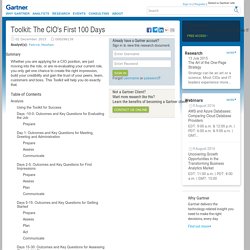 Sign in to view this research document. 8 Books Every IT Leader Should Read This Year. What you know often dictates what you do. 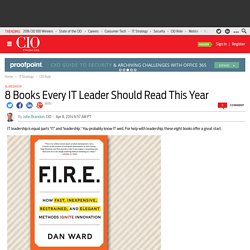 That's particularly true when it comes to IT leadership. Without clear knowledge of how the latest encryption technologies can help your company withstand a hacker attack, a CIO can't prepare for the worst. When handling employee performance issues across an entire department, knowing the latest strategies can help improve employee retention. To Lead You Must Serve. How to Refocus a Meeting After Someone Interrupts. Sign Up. 5 keys to effective project meetings. Today we will look at five key practices to adhere to in order to make sure you are never that person running an inefficient meeting. 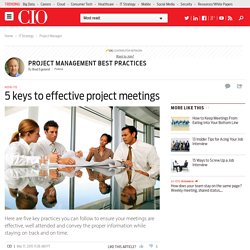 Sticking to these practices will help make sure you have great meetings that are well attended because you have an awesome reputation for conducting only meaningful and well led meetings that people leave feeling smarter than when they went in. Send out an advance agenda. Do yourself and your attendees a huge favor -- send out an agenda in advance. Millennials Want to Be Coached at Work. Imagine showing up to play an important college basketball game on a fabled rival’s home court, only to find you’ve forgotten your shoes. 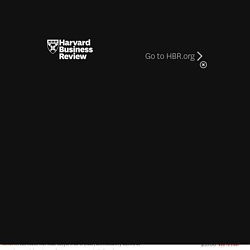 Now consider what to expect from your coach, after losing the game. A royal chewing out for not having your head in the game? The cold shoulder? Worse? Neither, according to NBA hall-of-famer Grant Hill, as he recalls the incident. The young people in your office aren’t so very different from the young Grant Hill at Duke. Good Employees make mistakes. Hitting The Intergenerational Sweet Spot - Monique Valcour. There’s no hotter topic in human resource management at present than how to manage Millennials (aka Generation Y), the age 30-and-under members of the workforce. 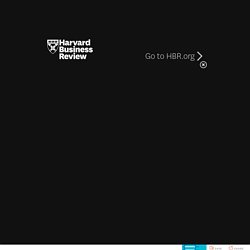 What Losing My Job Taught Me About Leading - Douglas R. Conant. By Douglas R. 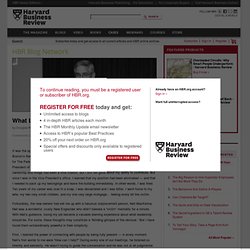 Conant | 8:00 AM March 18, 2013 It was the spring of 1984. I remember the day as if it were yesterday. It was a beautiful morning on Boston’s North Shore and I could smell the sea air as I drove to my job as the Director of Marketing for The Parker Brothers Toy and Game Company. When I arrived, I was greeted by the Acting Vice President of Marketing and asked to step into his office. Six tactics of natural leaders. In this week's Leadership Blog, our coach John M McKee shares six tactics you can use to move up the ladder more quickly. 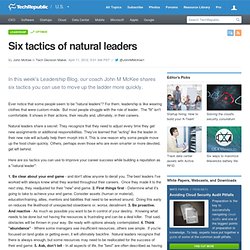 Ever notice that some people seem to be "natural leaders"? For them, leadership is like wearing clothes that were custom-made. But most people struggle with the role of leader. The "fit" isn't comfortable. It shows in their actions, their results and, ultimately, in their careers. The 3 Step Triple Threat: The courage to say it out loud. Step #2 of The 3 Step Triple Threat… Ask, Announce, Act (Repeat) (Part 3 of 4) Step #2: ANNOUNCE. 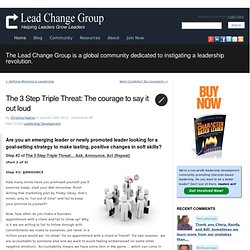 The Joy of Leadership. How is your joy of leadership? 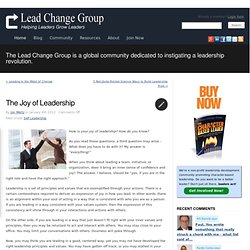 How do you know? As you read those questions, a third question may arise – What does joy have to do with it? My answer is “everything!” When you think about leading a team, initiative, or organization, does it bring an inner sense of confidence and joy? Best Leadership Books of 2011. WE HAVE more recorded information about leadership now than at any other time in history. 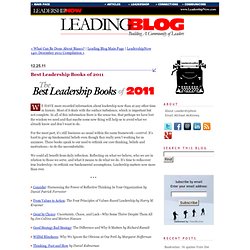 Most of it deals with the surface turbulence, which is important but not complete. In all of this information there is the sense too, that perhaps we have lost the wisdom we need and that maybe some new thing will help us to avoid what we already know and don’t want to do. If You're Not Micromanaging, You're Not Leading - Michael Schrage. By Michael Schrage | 11:45 AM May 23, 2012 The single most revealing moment in the coverage of JPMorgan’s multibillion dollar debacle can be found in this take-your-breath-away passage from The Wall Street Journal: On April 30, associates who were gathered in a conference room handed Mr.

Dimon summaries and analyses of the losses. But there were no details about the trades themselves. “I want to see the positions!” How Real Leaders Demonstrate Accountability. Everyone wants to be a leader. However, few are prepared to accept the accountability that goes with it. But you can’t have one without the other. They are two sides of the same coin. President Harry Truman, “The Buck Stops Here” BP's Tony Hayward and the Failure of Leadership Accountability - Rosabeth Moss Kanter. By Rosabeth Moss Kanter | 10:29 AM June 7, 2010. Which Behaviors Must Leaders Avoid? - Amy Jen Su and Muriel Maignan Wilkins. By Amy Jen Su and Muriel Maignan Wilkins | 12:00 PM May 28, 2013. What Being an "Authentic Leader" Really Means - Charalambos Vlachoutsicos. By Charalambos Vlachoutsicos | 12:00 PM December 7, 2012 Being an effective manager requires that you behave authentically.

“Why?” CEOs Don’t Come Pre-Made, Authentic Leadership Has To Be Learned. Editor’s note: Scott Weiss is a partner at Andreessen Horowitz and the former co-founder and CEO of IronPort Systems, which was acquired by Cisco in 2007. Follow him on his blog or on Twitter. 7 Reasons Leaders Can't Transfer their Success to Other Organizations. Is Your Leadership Showing? Most members of a team know when they’re doing their work well. How Great Bosses Motivate Employees. 5 Things Great Bosses Never Do. 25 Quotes to Inspire You to Become a Better Leader. Great Leaders Use Honesty to Help Their Successors - John Kotter. By John P. Kotter | 10:00 AM March 25, 2013 Jack Ma, the founder and long-time CEO of Chinese web company, Alibaba, recently announced that he is stepping down as CEO, and now we have learned that Jonathan Lu Zhaoxi will become chief executive of the company in May.

Alibaba is an incredible success story. Why the Most Successful Leaders Are Givers. 8 Things Great Bosses Demand from Employees. My recent column, 8 Core Beliefs of Extraordinary Bosses, drew a flood of responses. 7 Habits of Highly Effective Tech Company CEOs. CIO — When I was at IBM, I spent some time in the Executive Resource program, which is designed specifically to prepare someone to be a CEO. The program includes classes by top executives and military officers who either were CEOs themselves or were on the short path to becoming a CEO. Outside the Executive Resource program, I've also met or studied a number of CEOs, including Thomas Watson Jr., Steve Jobs, Louis Gerstner, Bill Gates and a variety of others. Each had unique skills, and no one was perfect in all things—though Watson came closest. The One Skill All Leaders Should Work On - Scott Edinger. By Scott Edinger | 11:30 AM March 29, 2012.