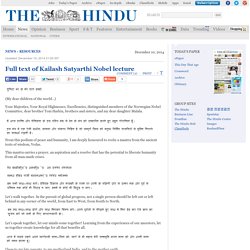 From this podium of peace and humanity, I am deeply honoured to recite a mantra from the ancient texts of wisdom, Vedas. This mantra carries a prayer, an aspiration and a resolve that has the potential to liberate humanity from all man-made crises. Let’s walk together. In the pursuit of global progress, not a single person should be left out or left behind in any corner of the world, from East to West, from South to North. Let’s speak together, let our minds come together! I bow to my late parents, to my motherland India, and to the mother earth. With a warm heart I recall how thousands of times, I have been liberated, each time I have freed a child from slavery.

Excel Formulas. Pune techie murder: How tech is manipulated to incite mobs. By Nikhil Subramanian The lynching of a young Muslim techie in Pune by a rightwing Hindu mob over morphed Facebook images has shaken the country, and exposed yet again, the danger of how social media and the Internet can be used to sow racial discord and mob violence, with those responsible able to get off scot free. 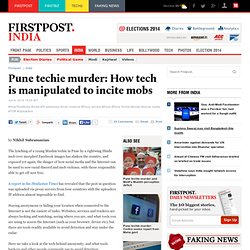 A report in the Hindustan Times has revealed that the post in question was uploaded via proxy servers from four countries with the uploaders IP address almost impossible to find. Staying anonymous or hiding your location when connected to the Internet is not the easiest of tasks. Websites, services and trackers are always looking and watching, seeing where you are, and what tools you are using to access the Internet (such as your browser, device etc), but there are tools readily available to avoid detection and stay under the radar.

Here we take a look at the tech behind anonymity, and what tools hackers and other people commonly use to avoid detection: Hide the IP. Trading Holidays. IRCTC Online Passenger Reservation System. Life Insurance Corporation of India.

LT Bills Quick Payment-OrumaWEB. Just another WordPress site. I have a colleague in London who sent me this interesting article. 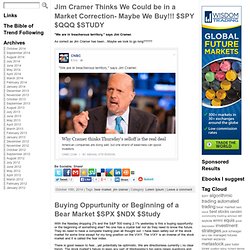 It is from Pimco…all credits to them… Some investors have been concerned that the historical success of trend-following – a quantitative strategy that seeks positive returns by capturing momentum across major asset classes – might unravel in a period of range-bound or rising interest rates. •We created a simple, transparent and hypothetical trend-following model that trades 20 markets and back-tested it over the period 1962 to 2013.

•Our results suggest that trend-following strategies have the potential to generate positive returns amid rising rates – and indeed, across all interest rate environments. ​ Article Main Body Some investors have been concerned that the historical success of trend-following – a quantitative strategy that seeks positive returns by capturing momentum across major asset classes – would unravel in a period of range-bound or rising interest rates. Figure 1 illustrates the point. Be Sociable, Share! Landline/FTTH bills-Cellone Bills-Online recharge. Geojit Commodity Customer Care. RBI extends deadline to exchange pre-2005 currency notes. You Can’t Force People To Stay In Your Life. Plus train. National Train Enquiry System -Indian railways.

20 Things that Belong On Everyone’s TO-DON’T List. Post written by: Marc Chernoff Email Your greatest fear should not be of failure, but of succeeding in life at all the wrong things. 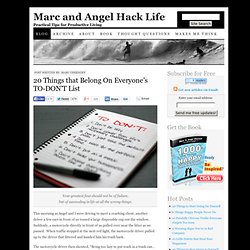 This morning as Angel and I were driving to meet a coaching client, another driver a few cars in front of us tossed a large disposable cup out the window. Suddenly, a motorcycle directly in front of us pulled over near the litter as we passed. When traffic stopped at the next red light, the motorcycle driver pulled up to the driver that littered and handed him his trash back. The motorcycle driver then shouted, “Being too lazy to put trash in a trash can… put that on your TO-DON’T list!” Wow! Besides the fact that this motorcycle driver is my new hero, he also reminded me to check and update my own TO-DON’T list. And since I just updated my TO-DON’T list, which is in essence a universally applicable list, I figured I’d share it with you today… Don’t be lazy. – The world doesn’t owe you anything; you owe the world something.

Your turn… State Bank of India.