13 reasons why: a vocabulary lesson. Since this has become a big hit, here is a lesson on it. 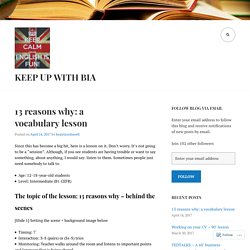 Don’t worry. It’s not going to be a “session”. Although, if you see students are having trouble or want to say something, about anything, I would say: listen to them. Sometimes people just need somebody to talk to. Age: 12-18-year-old studentsLevel: Intermediate (B1 CEFR) The topic of the lesson: 13 reasons why – behind the scenes [Slide 1] Setting the scene + background image below Timing: 7′Interaction: S-S (pairs) or (Ss-S) triosMonitoring: Teacher walks around the room and listens to important points and language that is being shared.Feedback: Teacher boards important vocabulary and pronunciation items. Steps: Students answer the questions in pairs: What is the plot of 13 reasons why?

2. [Slide 2] Getting to know the actors + background image below.

Learning Chocolate - Vocabulary Learning Platform. Vocabulary and autonomy. The general aim is to involve the students in a more autonomous fashion in their learning, rather than simply having them presented with word lists selected by the teacher or syllabus. 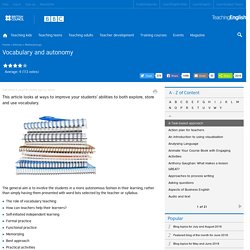 The role of vocabulary teachingHow can teachers help their learners? Self-initiated independent learningFormal practiceFunctional practiceMemorizingBest approachPractical activitiesReferences The role of vocabulary teachingIn the context of learning English as a foreign language, a learner is forced to be autonomous and independent and make conscious effort to learn vocabulary outside the classroom simply because the exposure to the target language is limited in class.

So teachers cannot rely on their Ss 'picking up' lexical items. This makes explicit vocabulary teaching necessary. How can teachers help their learners? Self-initiated independent learningThese strategies involve planned, active and motivated learning and exposure to language outside the classroom (media). Examples of strategies. 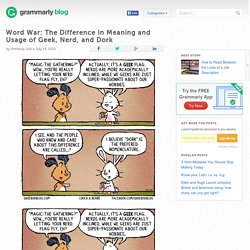 This isn’t Kansas anymore, Toto, and it’s also not mid-twentieth-century America, a time and place that had the Bill Gateses and Mark Zuckerbergs of the world pegged as the walking, talking intersections of social awkwardness, poor fashion sense, highfalutin intelligence, and a strange technophilia. The attitude towards GNDs (geeks, nerds and dorks) has changed tremendously, as have the definitions attached to the terms. The formerly caustic connotations carried by these words have been neutralized, which also means their meanings have converged and the labels themselves seem more interchangeable. But do geek, nerd, and dork really mean the same thing these days? We decided to get to the bottom of it by undertaking a good, ol’ etymology investigation (we’re more free to be word nerds than ever, after all).

From Circus Freak to Geek If you want to get specific, it was used to refer to unskilled performers whose acts were shocking and repulsive. In true Dr. 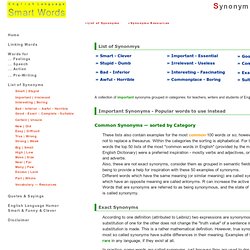 Important Synonyms - Popular words to use instead Common Synonyms — sorted by Category These lists also contain examples for the most common 100 words or so; however, the intention is not to replace a thesaurus. Within the categories the sorting is alphabetical. Exact Synonyms According to one definition (attributed to Leibniz) two expressions are synonymous if the substitution of one for the other does not change the "truth value" of a sentence in which the substitution is made. In practice, some words are called synonyms, just because they are used to describe the same "fact" in different parts of the world. English is rich in synonyms because during the centuries it adopted a variety of foreign languages - most notably French, German and Latin. Now, what does this mean? Popular Synonyms Lists (also Antonyms) Synomizer » Synonyms and Antonyms in 5 Languages. Vocabulary.