Building a Multiplayer Game with Node.js and Node-webkit: Toolset. Staying up with Node.JS. To many beginner Node.JS users, a fundamental and immediate apparent disadvantage of writing their web applications with Node.JS lies in the inability to save a file, refresh the browser and see their changes live. 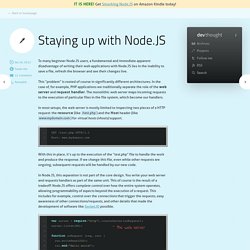 This “problem” is rooted of course in significantly different architectures. In the case of, for example, PHP applications we traditionally separate the role of the web server and request handler. The monolithic web server maps incoming requests to the execution of particular files in the file system, which become our handlers. Kriszyp/nodules. Foreverjs/forever. Node.js clustering made easy with PM2. Introduction As you would probably know, Node.js is a platform built on Chrome's JavaScript runtime, gracefully named V8. 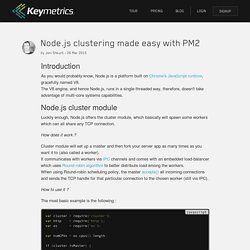 The V8 engine, and hence Node.js, runs in a single-threaded way, therefore, doesn't take advantage of multi-core systems capabilities. Node.js cluster module Luckily enough, Node.js offers the cluster module, which basically will spawn some workers which can all share any TCP connection. How does it work ? Cluster module will set up a master and then fork your server app as many times as you want it to (also called a worker). How to use it ? The most basic example is the following : var cluster = require('cluster'); var http = require('http'); var os = require('os'); var numCPUs = os.cpus().length; if (cluster.isMaster) { for (var i = 0; i < numCPUs; ++i) { cluster.fork(); }} else { http.createServer(function(req, res) { res.writeHead(200); res.end("hello world"); }).listen(8080);} Of course, you can spawn as many workers as you wish. The PM2 way. Node.js - req.body empty on posts. Here's what a DDOS Attack Looks Like - Yaabot.

Ever wondered how a DDoS (Distributed Denial of Service) attack would look like? 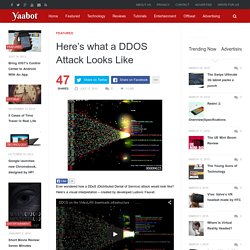 Here’s a visual interpretation – created by developed Ludovic Fauvet. The video above is a representation of an old DDoS attack on VideoLAN’s site. VideoLAN is the team that makes our beloved VLC player. The converging pulses represents traffic, while the spot where they are converging refers to the location of the VLC Media Player executable file. The server was receiving 200 requests every second, at a load of 30GBps. A DDoS attack is a hugely popular form of attack – hacker group Anonymous is known to use it quite often in its attempt to deliver ‘justice’.

The video was created using a tool called Lostalgia, which interprets and gives us page requests in the way we just saw in the video. By Shashank Bhardwaj Shashank is an entrepreneur, watch enthusiast, and wannabe investor. View all articles by Shashank Bhardwaj. Krakenjs - Give your node.js express apps some extra arms. Scaling Isomorphic Javascript Code. Whether your using Angular, Ember.js, BigPipe or any other framework, all have dealt with seperation of concern issues. 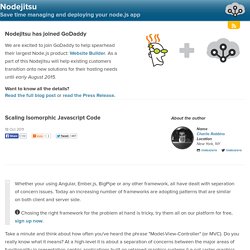 Today an increasing number of frameworks are adopting patterns that are similar on both client and server side. Chosing the right framework for the problem at hand is tricky, try them all on our platform for free, sign up now. Take a minute and think about how often you've heard the phrase "Model-View-Controller" (or MVC). Do you really know what it means? At a high-level it is about a separation of concerns between the major areas of functionality in presentation-centric applications built on retained graphics systems (i.e not-raster graphics, such as games). This approach has been acceptable for other languages such as Java, Ruby, and Python it is simply not good enough for Node.js for one reason: Javascript is now an isomorphic language.

Design patterns are the bread and butter of application development. Submodules. It often happens that while working on one project, you need to use another project from within it. 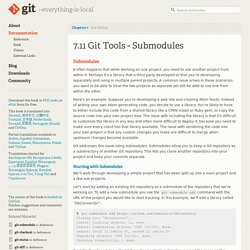 Perhaps it’s a library that a third party developed or that you’re developing separately and using in multiple parent projects. A common issue arises in these scenarios: you want to be able to treat the two projects as separate yet still be able to use one from within the other. Horizontally Scaling Node.js and WebSockets with Redis - GoldFire Studios.

The Node.js cluster module is a common method of scaling servers, allowing for the use of all available CPU cores. 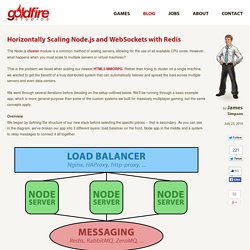 However, what happens when you must scale to multiple servers or virtual machines? That is the problem we faced when scaling our newest HTML5 MMORPG. Rather than trying to cluster on a single machine, we wanted to get the benefit of a truly distributed system that can automatically failover and spread the load across multiple servers and even data-centers. We went through several iterations before deciding on the setup outlined below. We'll be running through a basic example app, which is more general-purpose than some of the custom systems we built for massively multiplayer gaming, but the same concepts apply. OverviewWe began by defining the structure of our new stack before selecting the specific pieces -- that is secondary.