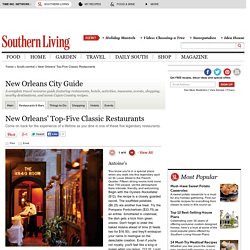 Crystal chandeliers cast a glow on the tiled floor, while fluted columns and small vases of flowers on the tables add to the ambience of the 1918 mainstay. Large black pots hold lacy ferns, and original light fixtures reflect off the tall leaded-glass windows. In the midst of this lovely setting, begin with a house favorite. Order the Shrimp Arnaud ($8.95), which is shrimp marinated in a tangy rémoulade made with Creole mustard. Now move on to Trout Meunière--deep fried and served with Creole Meunière Sauce and Brabant potatoes ($25.95). Above, left: Every meal at Arnaud's is a cause to celebrate. New Orleans Restaurants. New Orleans Restaurants. Visit The Swamps Of Louisiana. Just a short drive from New Orleans are a number of picturesque Louisiana swamps and a number of tours that you can take to explore the endless waterways and breathtaking nature. 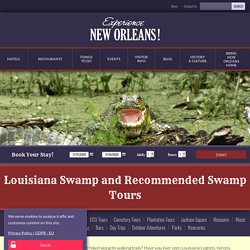 You'll explore undeveloped reaches of Louisiana decorated with Spanish moss and lined with gnarled cypress trees. Along the way, you'll be sure to encounter swamp wildlife like alligators, hundreds of different species of birds and many other animals. You'll learn about the pirates that once hid in these wild and pristine river swamps and hear legends of Bigfoot. You may be a bit nervous at first, but after your first boat tour, you'll want to go back again and again to keep exploring. Learn more about the swamps and the wildlife that inhabit them. Swamp Tours Near New Orleans Cajun Encounters Swamp Tours Cajun Encounters uses smaller boats accommodating up to 24 passengers to allow for a quieter and more personal experience. Bayou Sauvage National Wildlife Refuge.

Description: Visitors to New Orleans, and most locals, are certainly familiar with the French Quarter, St. 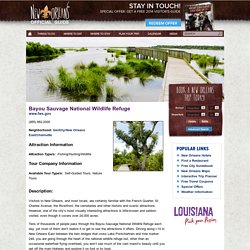 Charles Avenue, the Riverfront, the cemeteries and other historic and scenic attractions. However, one of the city’s most visually interesting attractions is little-known and seldom visited, even though it covers over 24,000 acres. Tens of thousands of people pass through the Bayou Sauvage National Wildlife Refuge each day, yet most of them don’t realize it or get to see the attractions it offers. 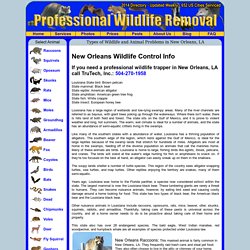 Many of the river channels are referred to as bayous, with giant trees poking up through the waterways. Where there isn't water, there is hills land of both field and forest. Downtown New Orleans. Creepy, Crusty, Crumbling: Illegal Tour of Abandoned Six Flags New Orleans [75 Pics] Hurricane Katrina killed this clown. 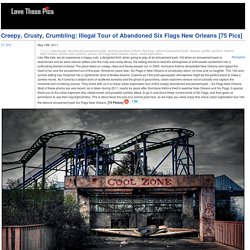 According to the photographer, “An abandoned Six Flags amusement park, someone spray painted ‘Six Flags 2012 coming soon’ on the wall above the downed head. But they were clownin.’ Six Flags will never rebuild here.” That’s sad, but much of New Orleans has not been restored to her former glory. This defunct amusement park on the cityâ€™s eastern edge must surely serve as a constant reminder that Katrina tried to wash them off the map. Welcome to Zombie Land kids! Chained dreams of fun at Six Flags New Orleans, abandoned Jazzland – that’s what Six Flags opened as “Jazzland” in 2000. Some photographers can see past the lifeless amusement park’s decay and desolation, showing us that there is still a chance the place could be cheery and not cheerless. Like a Bad Dream. Tours & Attractions. Jackson Square in the French Quarter. About Jackson Square Historic Jackson Square, originally known in the 18th century as "Place d'Armes," and later renamed in honor of the Battle of New Orleans hero Andrew Jackson, is a timeless attraction in the heart of the French Quarter of New Orleans. 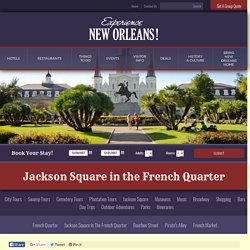 This famous landmark facing the Mississippi River is surrounded by historic buildings, including the St. Louis Cathedral, the Presbytere and Cabildo (Louisiana State Museums), not to mention the Lower and Upper Pontalba Apartments, the oldest apartment buildings in the United State. The Pontalba Apartments offer retail shops, museums, galleries and restaurants on the ground level; their second and third floors still house a selection of prestigious apartments. For well over a half-century, there has been a plein air artist colony at Jackson Square. 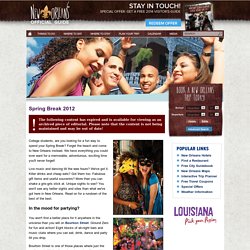 Please note that the content is not being maintained and may be out of date! College students, are you looking for a fun way to spend your Spring Break? Forget the beach and come to New Orleans instead. We have everything you could ever want for a memorable, adventurous, exciting time you'll never forget! Live music and dancing till the wee hours? In the mood for partying? You won't find a better place for it anywhere in the universe than you will on Bourbon Street. Bourbon Street is one of those places where just the excitement of being there, hanging out on the world-famous strip, is an experience in itself. WARNING: Just don't overdo it, though. Decatur Street, also, is another French Quarter strip lined with music clubs and fun bars to hang out in. Spring Break in New Orleans, LA.