The Cause of Muscle Cramps When You Exercise. Cramps come in four categories: True cramps, Rest cramps, Tetanic cramps, and Dystonic cramps. 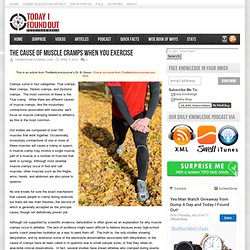 The most common of these is the True cramp. While there are different causes of muscle cramps, like the involuntary contractions associated with seizures, we’ll focus on muscle cramping related to athletics, as this is the most common. Our bodies are composed of over 700 muscles that work together. Occasionally, involuntary contractions of one or more of these muscles will cause a cramp or spasm. A muscle cramp may involve a single muscle, part of a muscle or a number of muscles that work in synergy.

No one knows for sure the exact mechanism that causes people to cramp during exercise, but there are two main theories, the second of which is generally accepted as the principle cause, though not definitively proven yet. Although not supported by scientific evidence, dehydration is often given as an explanation for why muscle cramps occur in athletes. Expand for References. How Much Physical Activity Do You Really Need? Health kick 'reverses cell ageing' 17 September 2013Last updated at 01:37 GMT By Michelle Roberts Health editor, BBC News online Telomeres cap the end of our chromosomes Going on a health kick reverses ageing at the cellular level, researchers say. 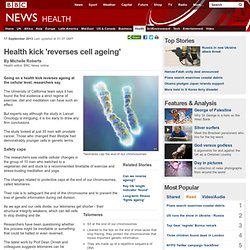 The University of California team says it has found the first evidence a strict regime of exercise, diet and meditation can have such an effect. But experts say although the study in Lancet Oncology is intriguing, it is too early to draw any firm conclusions. The study looked at just 35 men with prostate cancer. Safety caps The researchers saw visible cellular changes in the group of 10 men who switched to a vegetarian diet and stuck to a recommended timetable of exercise and stress-busting meditation and yoga. Exercise key to long, happy life. The study found that 150 minutes of vigorous physical activity per week added two to three years to the lives of the men during the 13-year study. 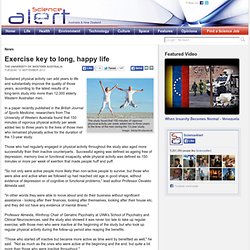 Image: Aletia/Shutterstock Sustained physical activity can add years to life and substantially improve the quality of those years, according to the latest results of a long-term study into more than 12,000 elderly Western Australian men. In a paper recently published in the British Journal of Sports Medicine, researchers from The University of Western Australia found that 150 minutes of vigorous physical activity per week added two to three years to the lives of those men who remained physically active for the duration of the 13-year study. Those who had regularly engaged in physical activity throughout the study also aged more successfully than their inactive counterparts. "Those who started off inactive but became more active as time went by benefited as well," he said. "Not only do they add years to life, but they add quality to their years. " Exercise 'can be as good as pills' 1 October 2013Last updated at 19:56 ET By Michelle Roberts Health editor, BBC News online Short, regular bouts of exercise could add years to your life, say experts Exercise can be as good a medicine as pills for people with conditions such as heart disease, a study has found. 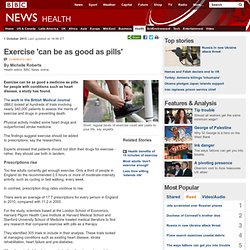 The work in the British Medical Journal (BMJ) looked at hundreds of trials involving nearly 340,000 patients to assess the merits of exercise and drugs in preventing death. Physical activity rivalled some heart drugs and outperformed stroke medicine. The findings suggest exercise should be added to prescriptions, say the researchers. Experts stressed that patients should not ditch their drugs for exercise - rather, they should use both in tandem. Prescriptions rise Too few adults currently get enough exercise. In contrast, prescription drug rates continue to rise.

There were an average of 17.7 prescriptions for every person in England in 2010, compared with 11.2 in 2000. But there were two exceptions. Health benefits. Walking 'cuts breast cancer risk' 4 October 2013Last updated at 00:22 ET Post-menopausal women who walk for an hour a day can cut their chance of breast cancer significantly, a study has suggested. 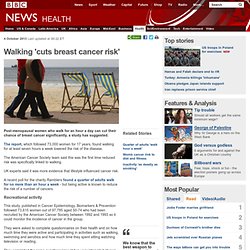 The report, which followed 73,000 women for 17 years, found walking for at least seven hours a week lowered the risk of the disease. The American Cancer Society team said this was the first time reduced risk was specifically linked to walking. UK experts said it was more evidence that lifestyle influenced cancer risk. A recent poll for the charity Ramblers found a quarter of adults walk for no more than an hour a week - but being active is known to reduce the risk of a number of cancers.

Recreational activity. Can You Ever Exercise Too Much? Some evidence shows that intense endurance workouts can put stress on the heart—but it's probably temporary. 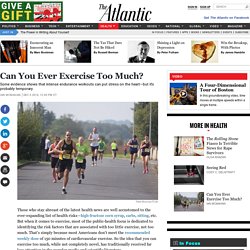 Those who stay abreast of the latest health news are well accustomed to the ever-expanding list of health risks—high-fructose corn syrup, carbs, sitting, etc. But when it comes to exercise, most of the public-health focus is dedicated to identifying the risk factors that are associated with too little exercise, not too much. That’s simply because most Americans don’t meet the recommended weekly dose of 150 minutes of cardiovascular exercise.

So the idea that you can exercise too much, while not completely novel, has traditionally received far less attention in the popular media and scientific literature. Regular physical exercise has been associated with decreased risk of chronic disease, improved cardiovascular health, and longer life. Endurance exercise may set off an existing cardiac condition, but can it cause one? 80/20 Body Composition Rule.