The Romantics. Dr Stephanie Forward explains the key ideas and influences of Romanticism, and considers their place in the work of writers including Wordsworth, Blake, P B Shelley and Keats. Today the word ‘romantic’ evokes images of love and sentimentality, but the term ‘Romanticism’ has a much wider meaning. It covers a range of developments in art, literature, music and philosophy, spanning the late 18th and early 19th centuries. The ‘Romantics’ would not have used the term themselves: the label was applied retrospectively, from around the middle of the 19th century. In 1762 Jean-Jacques Rousseau declared in The Social Contract: ‘Man is born free, and everywhere he is in chains.’ During the Romantic period major transitions took place in society, as dissatisfied intellectuals and artists challenged the Establishment. Revolution. 'I wandered lonely as a cloud'

A lyric poem inspired by an event on 15 April 1802, when William Wordsworth and his sister Dorothy came across a “long belt” of daffodils in the Lake District, where they lived at the time. 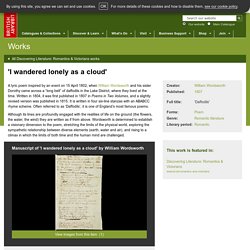 Written in 1804, it was first published in 1807 in Poems in Two Volumes, and a slightly revised version was published in 1815. It is written in four six-line stanzas with an ABABCC rhyme scheme. Often referred to as ‘Daffodils’, it is one of England’s most famous poems. Manuscript of 'I wandered lonely as a cloud' by William Wordsworth.

‘I wandered lonely as a cloud’ is the opening of one of William Wordsworth’s most famous poems. 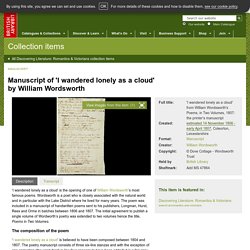 Wordsworth is a poet who is closely associated with the natural world and in particular with the Lake District where he lived for many years. The poem was included in a manuscript of handwritten poems sent to his publishers, Longman, Hurst, Rees and Orme in batches between 1806 and 1807. The initial agreement to publish a single volume of Wordworth’s poetry was extended to two volumes hence the title, Poems in Two Volumes. 'Composed upon Westminster Bridge, September 3, 1802' 'Composed upon Westminster Bridge'

Wordsworth’s vision of London’s serene beauty was composed on the roof of a coach – the poet was en route to France to meet his illegitimate daughter Caroline for the first time. 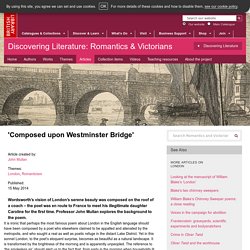 Professor John Mullan explores the background to the poem. It is ironic that perhaps the most famous poem about London in the English language should have been composed by a poet who elsewhere claimed to be appalled and alienated by the metropolis, and who sought a real as well as poetic refuge in the distant Lake District. Yet in this sonnet London, to the poet’s eloquent surprise, becomes as beautiful as a natural landscape. It is transformed by the brightness of the morning and is apparently unpeopled. The reference to ‘the smokeless air’ should alert us to the fact that, from early in the morning when households lit their fires, the capital would normally be shrouded in smoke. This is the only surviving pre-publication manuscript of the poem. View images from this item (1) Capturing time and place. 'Composed upon Westminster Bridge' An introduction to ‘Tintern Abbey’ Professor Philip Shaw considers the composition of 'Lines written a few miles above Tintern Abbey', and explains how Wordsworth uses nature to explore ideas of connection and unity. 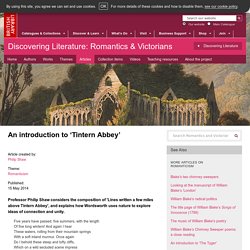 Five years have passed; five summers, with the length Of five long winters! And again I hear These waters, rolling from their mountain springs With a soft inland murmur. Once again Do I behold these steep and lofty cliffs, Which on a wild secluded scene impress Thoughts of more deep seclusion, and connect The landscape with the quiet of the sky. Revisiting. Locating Wordsworth: "Tintern Abbey" and the Co... – Romanticism on the Net.

For most of the last two decades discussion of Wordsworth's "Tintern Abbey" has been dominated by controversies centred on historicist readings of the poem. 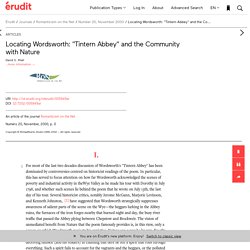 In particular, this has served to focus attention on how far Wordsworth acknowledged the scenes of poverty and industrial activity in theWye Valley as he made his tour with Dorothy in July 1798, and whether such scenes lie behind the poem that he wrote on July 13th, the last day of his tour.