Walmart worker gives disabled woman a manicure after nail salon refused. A SWEET moment between a Walmart employee and a customer with a disability is going viral on social media. 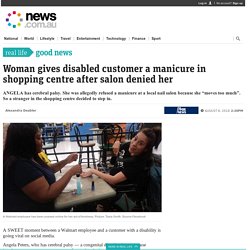 Angela Peters, who has cerebral palsy — a congenital disorder that can cause involuntary movements or tremors of arms, hands, legs and feet — was out shopping at a shopping centre in Michigan when she decided to get a manicure at the nail salon Da-Vi Nails. 'Ultimate race hatred': Bondi Beach mural defaced with 20 swastika symbols. More than 1.1m Australian Children Living In Poverty. How three coastal communities are dealing with rising seas. (more about Power Words) Atlantic One of the world’s five oceans, it is second in size only to the Pacific. 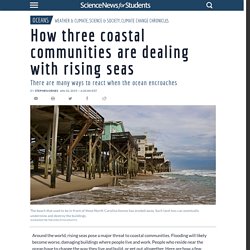 It separates Europe and Africa to the east from North and South America to the west. atoll A ring-shaped island formed from a coral reef that surrounds a lagoon. average (in science) A term for the arithmetic mean, which is the sum of a group of numbers that is then divided by the size of the group. barrier island A low, narrow, sandy island that develops just off the coast. climate The weather conditions that typically exist in one area, in general, or over a long period. climate change Long-term, significant change in the climate of Earth.

Computer model A program that runs on a computer that creates a model, or simulation, of a real-world feature, phenomenon or event. coral Marine animals that often produce a hard and stony exoskeleton and tend to live on reefs (the exoskeletons of dead ancestor corals). engineer A person who uses science to solve problems. Modern slavery uncovered in India's garment sector. Ocean Plastic Pollution - Australian Marine Conservation Society. Tony Robbins: 23-year-old Easton LaChappelle is the next Elon Musk. At 23, Easton LaChappelle has been called “the next Elon Musk” by none other than Tony Robbins. 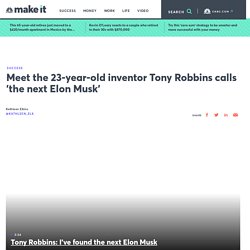 4-Year-Old Girl With Cerebral Palsy Gets Stolen Wheelchair Replaced - NBC Bay Area. Cyclone Idai crisis deepens as first cases of cholera confirmed in Mozambique. The first cases of cholera have been reported in the cyclone-ravaged Mozambican city of Beira, complicating an already massive and complex emergency in the southern African country. 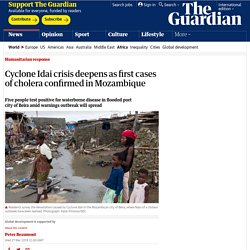 The announcement of five cases of the waterborne disease follows days of mounting fears that cholera and other diseases could break out in the squalid conditions in which tens of thousands have been living since Cyclone Idai struck on 14 March, killing at least 700 people across the region. The first cases of the disease were confirmed in Munhava, one of the poorest areas of the hard-hit port city of Beira, the national director of medical assistance, Ussene Isse, told reporters. Walk Through This Giant Stunning Exhibit Where Van Gogh's Artwork Comes to Life in Light. Be Sure And Share The News With Your Fellow Van Gogh Fans On Social Media… 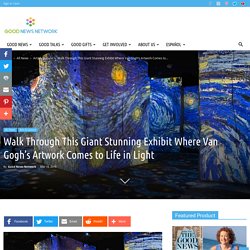 Officer rescues injured sheep from NSW heat. Fake tradesmen accused of ripping off elderly Queenslanders. Iceland to keep hunting whales for five years despite tourism concerns. Disappearing sea ice could disrupt Arctic’s food web. Distressed horse rescued by 'local heroes' after swimming 2km out to sea in SA. Updated 22 Jan 2019, 2:52pmTue 22 Jan 2019, 2:52pm A distressed horse has been rescued by two surfers and a local fisherman after swimming about 2 kilometres out to sea at a South Australian beach. 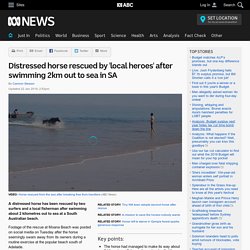 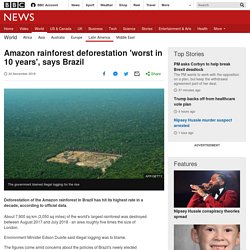 About 7,900 sq km (3,050 sq miles) of the world's largest rainforest was destroyed between August 2017 and July 2018 - an area roughly five times the size of London. Environment Minister Edson Duarte said illegal logging was to blame. The figures come amid concerns about the policies of Brazil's newly elected president, Jair Bolsonaro. During the 2018 election campaign, Mr Bolsonaro pledged to limit fines for damaging forestry and to weaken the influence of the environmental agency.

World Wildlife Fund Gets Ex-Poachers To Protect and Save the Big Cats They Once Hunted. Snow leopard populations are no longer an endangered species – and it is partially thanks to the poachers who once hunted them. 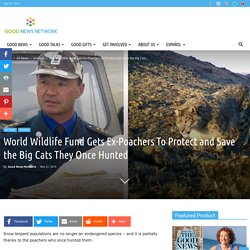 Rather than trying to discourage Russian hunters from poaching the elusive big cats, the World Wildlife Fund decided to take advantage of their unique tracking skills and recruit them as researchers to help monitor snow leopard populations and movements. ‘Projects For Good’ – This Ingenious Website Makes it Easier to Change the World! Unlike Kickstarter which funds creative startups, or GoFundMe which addresses personal needs, Projects for Good was designed for people who want to support the greater good, not just with money, but with their talent and energy—and don’t know where to start. 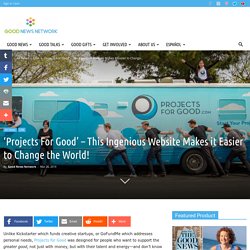 Patrick Furlotti is giving them that opportunity. Growing up in Santa Monica, California, Patrick learned at an early age that society could create a better world if people just worked together. As a teen he volunteered with Heal the Bay, which was trying to clean up water pollution in 1980s Los Angeles.