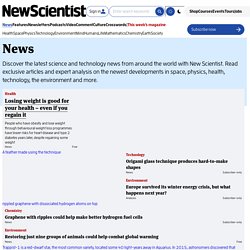 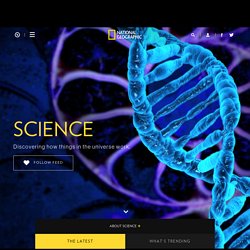 Or in more simple terms, discovering how things in the universe work. While there are many ways to group the fields of science, they are commonly divided into three groups – formal sciences (such as mathematics), natural sciences (such as biology) and social sciences (such as anthropology). Science existed in a general sense in historical civilisations, but it wasn’t until the 19th century that modern science began to transform our view of the universe. Live Science: The Most Interesting Articles, Mysteries & Discoveries. ScienceDaily: Your source for the latest research news. Science News & Discoveries. Scientific American Blog Network - Scientific American Blog Network. Home - CSIRO blog. ECOS. ECOS Magazine - Towards A Sustainable Future. Science blog network. Scientific Method.

Astronomy Blogs. The normally faint quasar CTA 102, once thought to harbor an advanced civilization and made famous in a 1967 song by the Byrds, is currently bright enough to see in an 8-inch telescope. 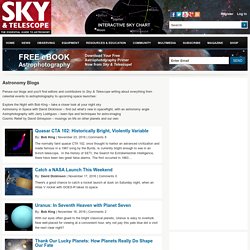 In the history of SETI, the Search for Extraterrestrial Intelligence, there have been two great false alarms. The first occurred in 1963… There's a good chance to catch a rocket launch at dusk on Saturday night, when an Atlas V rocket with GOES-R takes to space. Astronomy blog – Observations. Coastal Science and Societies.