The Human Immune System and Infectious Disease. All living things are subject to attack from disease-causing agents. 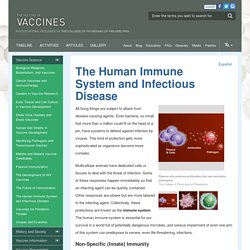 Even bacteria, so small that more than a million could fit on the head of a pin, have systems to defend against infection by viruses. This kind of protection gets more sophisticated as organisms become more complex. Multicellular animals have dedicated cells or tissues to deal with the threat of infection. Some of these responses happen immediately so that an infecting agent can be quickly contained. Other responses are slower but are more tailored to the infecting agent. Non-Specific (Innate) Immunity The human immune system has two levels of immunity: specific and non-specific immunity. All animals have innate immune defenses against common pathogens. Some white blood cells (phagocytes) fight pathogens that make it past outer defenses. Specific Immunity While healthy phagocytes are critical to good health, they are unable to address certain infectious threats. 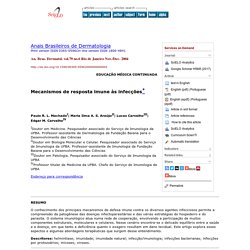 Defense Mechanisms We live in a sea of infectious agents, and we have evolved several mechanisms for protecting ourselves against those that are potentially pathogenic. 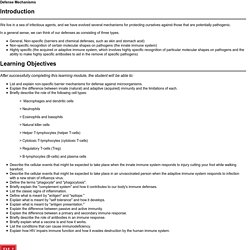 In a general sense, we can think of our defenses as consisting of three types. General, Non-specific (barriers and chemical defenses, such as skin and stomach acid)Non-specific recognition of certain molecular shapes on pathogens (the innate immune system)Highly specific (the acquired or adaptive immune system, which involves highly specific recognition of particular molecular shapes on pathogens and the ability to make highly specific antibodies to aid in the remove of specific pathogens) After successfully completing this learning module, the student will be able to: List and explain non-specific barrier mechanisms for defense against microorganisms.Explain the difference between innate (natural) and adaptive (acquired) immunity and the limitations of each.Briefly describe the role of the following cell types: Source: 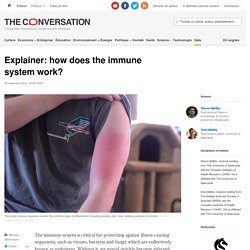 Without it, we would quickly become infected, sicken, and die. Immune cells are constantly on the lookout for pathogens, patrolling the blood by moving around in the blood. Around half your blood volume is fluid known as plasma; the remainder is made up of millions of different types of cells. Chapter 1: The Immune System’s Role in Protection. Germs are everywhere: in air, soil, rocks, and water; in plants and animals; and, of course, in our own bodies. 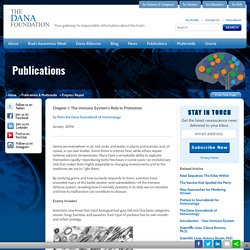 Some thrive in intense heat, while others require extreme subzero temperatures. Many have a remarkable ability to replicate themselves rapidly—reproducing every few hours in some cases—an evolutionary trick that makes them highly adaptable to changing environments and to the medicines we use to ﬁght them. By studying germs and how our body responds to them, scientists have unraveled many of the battle secrets—and vulnerabilities—of the immune defense system, revealing how it normally operates in its daily war on microbes and how its malfunction can contribute to disease. Enemy Invaders Scientists now know that most biological bad guys fall into four basic categories: viruses, fungi, bacteria, and parasites.

Viruses Viruses are not whole cells but consist of one or more molecules of DNA or RNA. Fungi. The body’s first line of defence. The body’s second line of defence. 6.3 Defence Against Infectious Disease. The innate and adaptive immune systems - National Library of Medicine - PubMed Health. The defense mechanisms of the adaptive immune system - National Library of Medicine - PubMed Health. Innate Immune Response. Immune system. The response to a cut The immune system is made up of special cells and chemicals that fight infection. 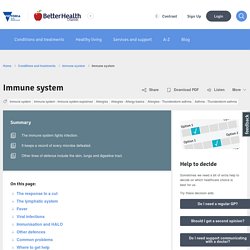 The white blood cells that make up the immune system are made in the bone marrow. These cells move through blood and tissue. Every time a microbe (germ) is overcome, the immune system remembers that microbe. If the body comes in contact with that microbe again, it will be defeated quickly. The immune system also produces proteins called antibodies that can help neutralise infection or the toxins that some germs produce.

The response to a cut When skin is broken, microbes can enter the cut. The lymphatic system The lymphatic system is part of the immune system. Fever A rise in body temperature, or fever, can happen with some infections. Viral infections The immune system keeps a record of every microbe it has ever defeated. Some infections, like influenza and the common cold, have to be fought many times, because so many different viruses can cause these illnesses. Immune response: MedlinePlus Medical Encyclopedia. The immune system protects the body from possibly harmful substances by recognizing and responding to antigens. 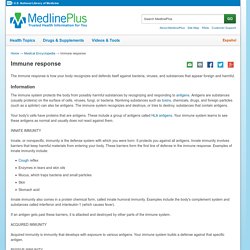 Antigens are substances (usually proteins) on the surface of cells, viruses, fungi, or bacteria. Nonliving substances such as toxins, chemicals, drugs, and foreign particles (such as a splinter) can also be antigens. The immune system recognizes and destroys, or tries to destroy, substances that contain antigens. Your body's cells have proteins that are antigens. These include a group of antigens called HLA antigens.