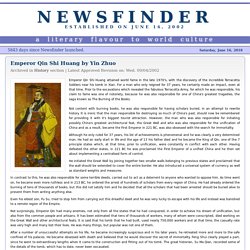 For a man who only reigned for 37 years, he certainly made an impact, even at that time. Prior to the excavations which revealed the fabulous Terracotta Army, for which he was responsible, his claim to fame was one of notoriety, because he was also responsible for one of China's greatest tragedies, the saga known as The Burning of the Books.

Not content with burning books, he was also responsible for having scholars buried, in an attempt to rewrite history. It is ironic that the man responsible for destroying so much of China's past, should now be remembered for providing it with it's biggest tourist attraction. Although he only ruled for 37 years, his list of achievements is phenomenal and he was clearly a very determined man. Records mention a “ Lake of Mercury “, using some kind of mechanical device to imitate the movement of the oceans. Eemperors of Qin Dynasty, Qin Shihuang, History of Ancient China. Era Information Time: 221 B.C.-207B.C.Location of Capital: Xianyang City in Shanxi Province, not far from Xian Emperors: Ying Zheng, Fushu, Zi Ying Replaced by:Han Dynasty Qin Shinhuang, called Yingzheng, was the son of Zhuang Rangwang (some one has said he was the bastard of Li Buwei, a famous figure in China history) He was a great politics, military leader, and the first emperor of China. 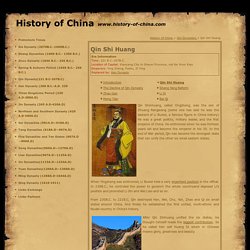 He enthroned when he was thirteen years old and become the emperor in his 39. In the end of War period, Qin has become the strongest state that can unify the other six small eastern states. When Yingzheng was enthroned, Li Buwei held a very important position in the offical. In 238B.C., he controled the power to govenrn the whole countryand deposed Li’s position and promoted Li Shi and Wei Liao and so on.

From 230B.C. to 221B.C, Qin destroyed Han, Wei, Chu, Yan, Zhao and Qi six small states around China. History of the Great wall of China. Great Wall Hiking - hiking along several differentsections of the Great Wall will give you an unrivalledGreat Wall experience. 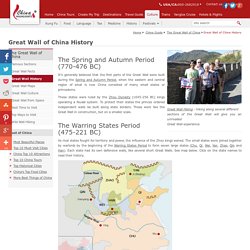 The Spring and Autumn Period (770-476 BC) It's generally believed that the first parts of the Great Wall were built during the Spring and Autumn Period, when the eastern and central region of what is now China consisted of many small states or princedoms. These states were ruled by the Zhou Dynasty (1045-256 BC) kings operating a feudal system. To protect their states the princes ordered independent walls be built along state borders.

These were like the Great Wall in construction, but on a smaller scale. The Warring States Period (475-221 BC) Qin Shihuangdi â the rise to power. Before its unification under Qin Shihuangdi, its First Emperor (259 – 210 BC), China was made up of seven major states which were often at war with each other, vying for power and supremacy. 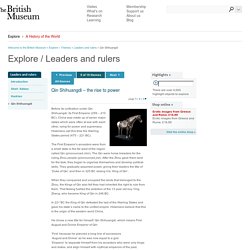 Historians call this time the Warring States period (475 – 221 BC). The First Emperor’s ancestors were from a small state in the far west of the region called Qin (pronounced chin). The Qin were horse breeders for the ruling Zhou people (pronounced joe). After the Zhou gave them land for the task, they began to organise themselves and develop political skills. Emperor Qin Shi Huang. History for Kids >> Biography >> Ancient ChinaBiography: Early Life Prince Zheng was born in 259 BC. 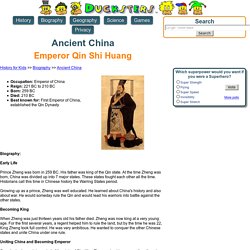 Qin Shihuang. How One Chinese Emperor Changed the World. Each Monday, this column turns a page in history to explore the discoveries, events and people that continue to affect the history being made today. 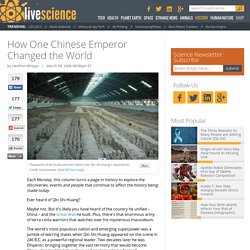 Ever heard of Qin Shi Huang? Maybe not. But it's likely you have heard of the country he unified – China – and the Great Wall he built. Plus, there's that enormous army of terra-cotta warriors that watches over his mysterious mausoleum. The world's most populous nation and emerging superpower was a jumble of warring states when Qin Shi Huang appeared on the scene in 246 B.C. as a powerful regional leader.

Qin Shi Huang (pronouncerd "chin shuh huang") remains a mythical figure in China, still laying in rest in the largest unopened tomb in history, said to contain rivers of mercury and a ceiling covered in precious stones. Get along When Qin Shi Huang ascended as ruler of the Qin tribe in 246 B.C., China had been at war for 200 years.