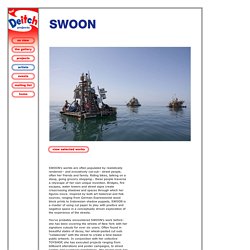 Riding bikes, talking on a stoop, going grocery shopping-- these people traverse a cityscape of her own unique invention. Bridges, fire escapes, water towers and street signs create crisscrossing shadows and spaces through which her figures move. Inspired by both art historical and folk sources, ranging from German Expressionist wood block prints to Indonesian shadow puppets, SWOON is a master of using cut paper to play with positive and negative space in a conceptually driven exploration of the experience of the streets. You’ve probably encountered SWOON’s work before: she has been covering the streets of New York with her signature cutouts for over six years. Often found in beautiful states of decay, her wheat-pasted cut outs “collaborate” with the street to create a time-based public artwork. Meet the women redefining street art. If there is a gender disparity in the art world, it is all the more acute in street art. 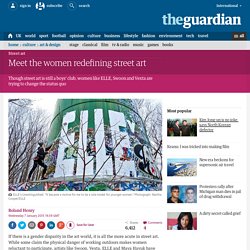 While some claim the physical danger of working outdoors makes women reluctant to participate, artists like Swoon, Vexta, ELLE and Maya Hayuk have battled through, undeterred by discrimination both on the street and in galleries. New York-based ELLE sums it up. “I understand the deterrents – potential jail time, the humiliation of community service, destruction of property (or beautification, depending on your view), late nights, dark places, high climbs. All of this reminds me of that Always commercial, Like a Girl, where all of the girls and boys run exactly the same until about age 12, then take the meaning of running ‘like a girl’ to mean flailing hands and legs and skipping and not sincerely running hard and kicking ass.”

ELLE’s early experience of street art began as an ambition to go as hard as her male peers. She says that women’s work is still often marginalised. Committed to showing important art by prominent established and contemporary artists. ‹ back to artists previous artworknext artwork 'Mortimer and Jenkins' 27" x 21" $1200.00 'Mortimer and Jenkins', Etching on Arches aquarelle cotton paper, 27" x 21", $1200.00 Untitled 26cm x 34cm $3000.00 SoldUntitled, Mixed Media, 26cm x 34cm, $3000.00 Sold Swoon has been working on the streets of New York City for over 10 years, creating large scale paste-ups of the every day inhabitants of the Big Apple. 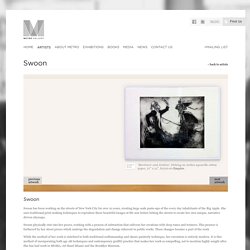 She uses traditional print making techniques to reproduce these beautiful images at life size before hitting the streets to create her own unique, narrative driven cityscape. Swoon physically cuts into her pieces, working with a process of subtraction that enlivens her creations with deep tones and textures. While the method of her work is indebted to both traditional craftsmanship and classic painterly technique, her execution is entirely modern. Swoon. Swoon Blurs the Line Between Art and Activism. Continue reading the main story Video With a glowing paper cutout pinned over her heart, the artist known as Swoon led a procession through the Brooklyn Museum early one summer night to her installation “Submerged Motherlands,” a site-specific jumble that includes two cantilevered rafts, seemingly cobbled out of junk; a tree, of fabric and wire, that reaches to the rotunda; and nooks of stenciled portraits. 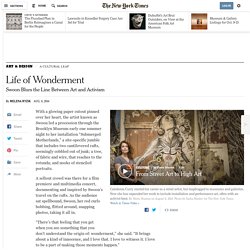 A sellout crowd was there for a film premiere and multimedia concert, documenting and inspired by Swoon’s travel on the rafts. As the audience sat spellbound, Swoon, her red curls bobbing, flitted around, snapping photos, taking it all in. “There’s that feeling that you get when you see something that you don’t understand the origin of: wonderment,” she said. “It brings about a kind of innocence, and I love that. Since she began illegally pasting images around the city 15 years ago, Swoon has inspired a lot of wonderment. Continue reading the main story Slide Show “It was also,” Ms.

— Vogue. New York City Street Artist: Swoon. Advertisement Since I express my artistic creativity through writing and not art in the traditional sense, I am always fascinated by artists who draw, paint and create with different mediums. 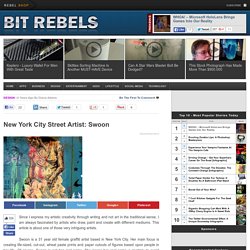 This article is about one of those very intriguing artists. Swoon is a 31 year old female graffiti artist based in New York City. Her main focus is creating life-sized, cut-out, wheat paste prints and paper cutouts of figures based upon people in her life. Of course, Swoon is not her real name. I always wonder what these emphatically creative artists think about when they create.

“When I first began to do street work, part of my impulse had to do with those things that are meant to disappear and the ability to just let things go. “I’ve always really had the sense of the way that people store things inside their bodies and the way that everything you’ve ever seen or ever done is a part of you.

I hope you enjoy this interview with Swoon as much as I did! Walrus TV Artist Feature: Swoon Interview from "The Run Up"