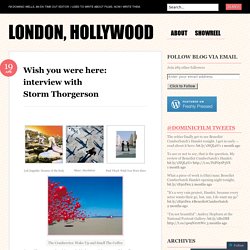 He originally wanted to be a film director, and in a way, his images all feel like found scenes from a wider movie. I conducted a fascinating interview with him in 2007, in the arts supplement I edited at the Saturday Times. This was the story: If the future of music lies in downloads, one man will suffer more than most. Storm who? The Dark Side of the Moon prism? Before we meet in a café in Belsize Park, North London, I get the tour of Thorgerson’s next-door flat-cum-studio which he has owned since the 1970s. “That’s why I prefer to describe these shoots as ‘performances’,” Thorgerson explains airily, squeezing himself into the café bench and parking his walking stick. He had previously intended to be a film director, inspired by seeing Fellini’s 8½ and Antonioni’s L’Avventura, and he studied cinema at the Royal College of Art.

Like this: Afterword: Storm Thorgerson. The Official Site. Storm Thorgerson Designer and film-maker Storm Thorgerson grew up in Cambridge and was an early friend of Syd Barrett, Roger Waters and David Gilmour, all from Pink Floyd, for whom he designed many album covers, including the iconic sleeve for The Dark Side Of The Moon. 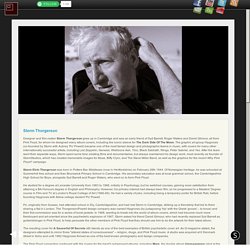 The graphic art group Hipgnosis (co-founded by Storm with Aubrey 'Po' Powell) became one of the most famed design and photographic teams in music, with covers for many other internationally successful artists, including Led Zeppelin, Genesis, Wishbone Ash, 10cc, Black Sabbath, Wings, Peter Gabriel, and Yes. After the team went their separate ways, Storm spent some time creating films and documentaries, but always maintained his design work, most recently as founder of StormStudios, which has created memorable images for Muse, Biffy Clyro, and The Steve Miller Band, as well as the graphics for the recent Why Pink Floyd? Campaign. Storm explained his approach: "I'm very interested in intentional ambiguity. Storm Thorgerson. In 1972 on the Burbank studio film lot in Los Angeles, Storm Thorgerson and his design partner Aubrey Powell of the famed company Hipgnosis set a man on fire creating one of rock and roll’s most iconic album covers: Pink Floyd’s Wish You Were Here. 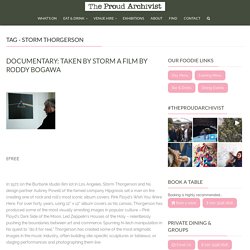 For over forty years, using 12” x 12” album covers as his canvas, Thorgerson has produced some of the most visually arresting images in popular culture – Pink Floyd’s Dark Side of the Moon, Led Zeppelin’s Houses of the Holy – relentlessly pushing the boundaries between art and commerce. Spurning hi-tech manipulation in his quest to “do it for real,” Thorgerson has created some of the most enigmatic images in the music industry, often building site-specific sculptures or tableaus, or staging performances and photographing them live. Born and raised in Los Angeles, Japanese American artist Roddy Bogawa (b. 1962) studied art and sculpture and played in punk bands before turning to film. £FREE – (Advance booking recommended) The albums you can judge by their cover thanks to Storm Thorgerson - the master of the record sleeve. The cover of the 12in long-playing album had the magical effect of making the record within the cover seem more important than it was. 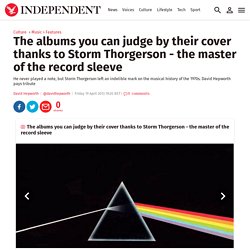 It's this canvas, longingly gazed at through the window of the Spinning Disc, sported beneath the arm of the party-bound sixth former or twirled between the listless fingers of a long hair perched equidistant between his new Wharfedales, which provided the visual focus for an auditory experience and encouraged a surprising wave of visual literacy. Generations of people who knew nothing about art nonetheless knew that Peter Blake designed Sgt Pepper, that Andy Warhol provided the banana on the first Velvet Underground LP, that Robert Frank's photographs adorn the Rolling Stones Exile On Main Street and that the painting on the cover of New Order's Power, Corruption & Lies is A Basket Of Roses by Henri Fantin-Latour.

Album cover evolution - Storm Thorgerson explains. With any album cover project, there are many considerations to be thought about during the design process. 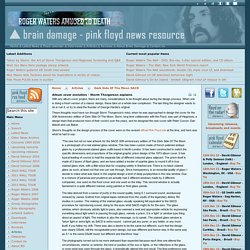 When one is doing a fresh version of a classic design, these take on a whole new complexion. Who’s Taken by Storm? Hipgnosis. 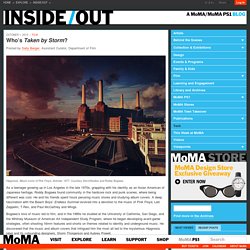 Album cover of Pink Floyd, Animals. 1977. Courtesy StormStudios and Roddy Bogawa As a teenager growing up in Los Angeles in the late 1970s, grappling with his identity as an Asian American of Japanese heritage, Roddy Bogawa found community in the hardcore rock and punk scenes, where being different was cool. He and his friends spent hours perusing music stores and studying album covers. A deep fascination with the Beach Boys’ Endless Summer evolved into a devotion to the music of Pink Floyd, Led Zeppelin, T-Rex, and Paul McCartney and Wings. Storm Thorgerson and the End of Album Art. The death last week of Storm Thorgerson at the age of sixty-nine was both the end of an era and the reminder of the end of another era. 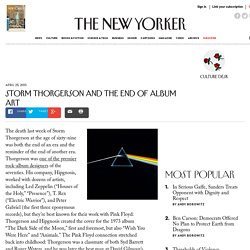 Thorgerson was one of the premier rock-album designers of the seventies. His company, Hipgnosis, worked with dozens of artists, including Led Zeppelin (“Houses of the Holy,” “Presence”), T. Rex (“Electric Warrior”), and Peter Gabriel (the first three eponymous records), but they’re best known for their work with Pink Floyd: Thorgerson and Hipgnosis created the cover for the 1973 album “The Dark Side of the Moon,” first and foremost, but also “Wish You Were Here” and “Animals.” The Pink Floyd connection stretched back into childhood: Thorgerson was a classmate of both Syd Barrett and Roger Waters, and he was later the best man at David Gilmour’s wedding. 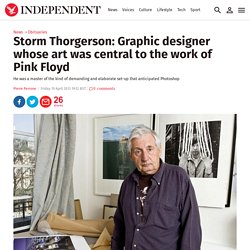 Hipgnosis, the partnership he formed with his fellow designer and flatmate Aubrey Powell in 1968, created the eye-catching, surreal cover art that adorned Floyd albums from the psychedelic collage of A Saucerful Of Secrets to Animals, the 1977 release featuring an inflatable pig floating over Battersea power station, based on an idea by Floyd bassist Roger Waters, via the prism of The Dark Side Of The Moon.

"I was passing a bookshop and saw an image of a prism ... and thought maybe that would work," he said last month. "It was about light, which was featured in their show; the triangle is a symbol of ambition which was in the lyrics, and the prism is also a common property – except I made one big change. STORMSTUDIOS Design. HIPGNOSIS.