On God’s Immanence and Transcendence - CultureWatch. There is no more important, profound and majestic theme than God, and to talk of his attributes is a sublime and never-ending discussion. 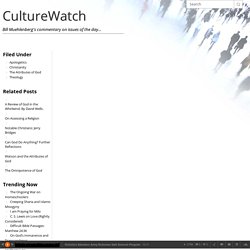 Oceans of ink can never even begin to exhaust who God is and what he is like. But we are called to think God’s thoughts after him, and seek to put the truths of Scripture into some order and structure. That is the task of theology, especially systematic theology. And all important theologies give pre-eminence to God, who he is, and what he is like. Theological beliefs in god: concepts of transcendence & immanence. Sponsored link. 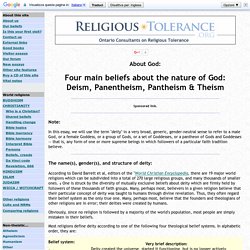 Note: In this essay, we will use the term "deity" in a very broad, generic, gender-neutral sense to refer to a male God, or a female Goddess, or a group of Gods, or a set of Goddesses, or a pantheon of Gods and Goddesses -- that is, any form of one or more supreme beings in which followers of a particular faith tradition believe. The name(s), gender(s), and structure of deity: According to David Barrett et al, editors of the "World Christian Encyclopedia, there are 19 major world religions which can be subdivided into a total of 270 large religious groups, and many thousands of smaller ones. 1 One is struck by the diversity of mutually exclusive beliefs about deity which are firmly held by followers of these thousands of faith groups. Nature of Religion and Beliefs - Requirement 1 (Content Description) Religion by its nature defies precise definition. 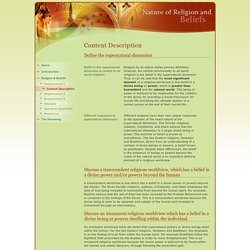 However, the central commonality to all world religions is the belief in the supernatural dimension. Thus, it can be said that the most significant element of a religious worldview is this belief in a divine being or power, which is greater than humankind and the natural world. This being or power is believed to be responsible for the creation of the world, for providing a moral framework for human life and being the ultimate destiny of a human person at the end of their mortal life. World Book. World Religions. This is a quiet place in cyberspace devoted to religious tolerance and scholarship Non-public domain contents of this site not otherwise copyrighted are © copyright 2010, John Bruno Hare, All Rights Reserved. 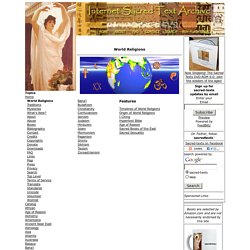 See Site copyrights, Terms of Service for more information.Index | FAQ | Contact | Search | Buy DiskOpen Source for the Human Soul. Library of World Religions and Faith Traditions. Written by the world's leading authorities on religion and spirituality, the Patheos Library offers the most accurate and balanced information available on the web. 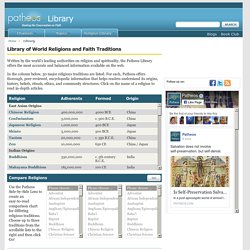 In the column below, 50 major religious traditions are listed. For each, Patheos offers thorough, peer-reviewed, encyclopedic information that helps readers understand its origins, history, beliefs, rituals, ethics, and community structures. Click on the name of a religion to read in-depth articles. Religion: Religions. Just the facts on religions. Sacred Texts Of Major World Religions - WorldAtlas.com. Religious texts are those sacred and central to the teachings of almost nay given religion. 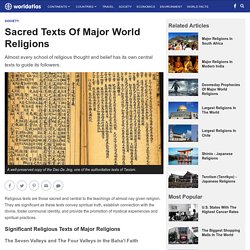 They are significant as these texts convey spiritual truth, establish connection with the divine, foster communal identity, and provide the promotion of mystical experiences and spiritual practices. The Seven Valleys and The Four Valleys in the Baha'i Faith These are two distinct texts of the Baha’i faith written by Baha’u’llah, the founder of the Baha’i faith. The Seven Valleys, written in the year 1860 in Baghdad, explains the journey of the soul through seven stages of life that focus on finding the right path.

The Four Valleys, written in the year 1857 in Baghdad states qualities of the mystical wayfarers as the observance of laws of religion, journey to God by using logic and reason, with love of God and journey through reason, obedience and inspiration. Exploring Religious Ethics in Daily Life - dummies. By Rabbi Marc Gellman, Monsignor Thomas Hartman Religious ethics are the moral principles that guide religions and that set the standard for what is and isn’t acceptable behavior. 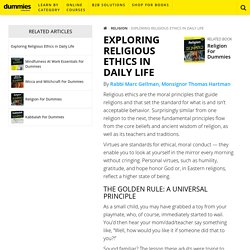 Surprisingly similar from one religion to the next, these fundamental principles flow from the core beliefs and ancient wisdom of religion, as well as its teachers and traditions. Sacred Texts - THEO 424: Christianity and World Religions - Research & Course Guides at University of St. Thomas. Ethics & Religion – A Guide to Ethics. Click Here for a PDF of the chapter “Preliminary Distinctions” from Contemporary Philosophy of Religion, by Charles Taliaferro – A great introduction to ethics in Philosophy of Religion Religious ethics concerns teachings and practices of what is right or wrong, good or bad, virtuous or vicious, from a religious point of view. 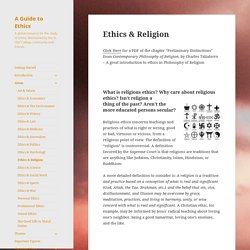 The definition of “religion” is controversial. A definition favored by the Supreme Court is that religions are traditions that are anything like Judaism, Christianity, Islam, Hinduism, or Buddhism. A more detailed definition to consider is: A religion is a tradition and practice based on a conception of what is real and significant (God, Allah, the Tao, Brahman, etc.), and the belief that sin, vice, disillusionment, and illusion may be overcome by grace, meditation, practices, and living in harmony, unity, or wise concord with what is real and significant. The Dreamtime - Aboriginal Art Online. The Dreamtime is a widely used, but not well understood, term describing key aspects of Aboriginal spiritual beliefs and life. 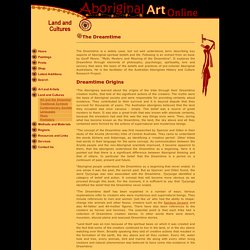 Following is an extract from an book by Geoff Moore. "Myth, Mystery and Meaning of the Dreamtime". It explores the Dreamtime through elements of philosophy; psychology; spirituality, lore and secrecy that were the basis of the beliefs and practices of pre-colonial Aboriginal Australians. He is the facilitator of the Australian Aborigines History and Culture Research Project. "The Aborigines learned about the origins of the tribe through their Dreamtime creation myths, that told of the significant actions of the creators. Art, Land and the Dreaming - Aboriginal Art Online. Art is a central part of Aboriginal life and is intimately connected to land, law and religious belief. 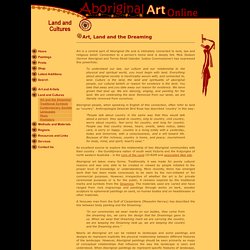 Connection to a person's home land is deeply felt. Mick Dodson (former Aboriginal and Torres Strait Islander Justice Commissioner) has expressed this powerfully: Dreaming and the Dreamtime - Aboriginal Art Online. The Dreaming is a term used by Aborigines to describe the relations and balance between the spiritual, natural and moral elements of the world.

It is an English word but its meaning goes beyond any suggestion of a spiritual or dream-related state. Rather, the Dreaming relates to a period from the origin of the universe to a time before living memory or experience - a time of creator ancestors and supernatural beings. This time is also called the Dreamtime, when the Rainbow Serpent moved across the land and the Wandjina were active in the clouds and skies. The Amazing Story of Aboriginal Art. The same year in July of one of Clifford Possum Tjapaltjarri’s acclaimed work ‘Warlugulong “map series” reached $2.4 million. Aboriginal Art is equally at home in both galleries and museums. The Australian Aboriginal is arguably the most successful and certainly the longest surviving culture in human history. It is complex and focused on long term survival in the most hostile of environments.

It has deep knowledge, spiritual, cultural and practical survival teachings. Dreamtime Aboriginal Art Library of Knowledge. Spirituality - Australian Museum. Spirituality for Indigenous Australians takes many forms. Pukumani Poles from the Tiwi Islands Photographer: Carl Bento © Australian Museum Its forms and practices have been profoundly influenced by the impact of colonialism, both past and present. Some Indigenous Australians share the religious beliefs and values of religions introduced into Australia from other cultures around the world, particularly Europe.

But for most people religious beliefs are derived from a sense of belonging-to the land, to the sea, to other people, to one's culture. DP9 Aboriginal Spirituality.