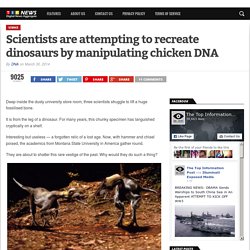 It is from the leg of a dinosaur. For many years, this chunky specimen has languished cryptically on a shelf. Interesting but useless — a forgotten relic of a lost age. Now, with hammer and chisel poised, the academics from Montana State University in America gather round. Jurassic World turning real? Scientists trying to recreate dinosaurs using chickens. (Universal Pictures) 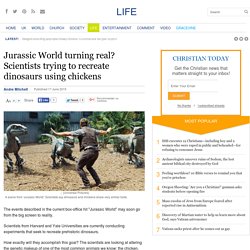 Prehistoric Pulp: Raising the Dead: Bringing back extinct animals in fiction. Note: This article was inspired by an essay about dinosaurs in science fiction appearing in Dougal ’s The New Dinosaurs: An Alternate Evolution. 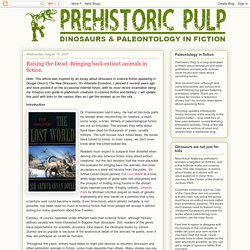 I penned it several years ago and have posted it on the occasional Internet forum, with its most recent incarnation being my Amazon.com guide to prehistoric creatures in science fiction and fantasy. I will update this post with links to the various titles as I get the reviews up on this site. Introduction Dr. Frankenstein had it easy. Readers must expect to suspend their disbelief when delving into any science fiction story about extinct creatures, but the fact remains that the more plausible the scenario for bringing back the animals, the more acceptance a work will receive from the public.

Fantasy, of course, operates under different rules than science fiction, although fantasy authors usually are more interested in dragons than dinosaurs. Creating dinosaurs: why Jurassic World could never work. When the first Jurassic Park movie hit the silver screens in 1993, I cried. 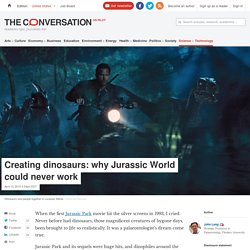 Never before had dinosaurs, those magnificent creatures of bygone days, been brought to life so realistically. It was a palaeontologist’s dream come true. Jurassic Park and its sequels were huge hits, and dinophiles around the world are now anxiously awaiting the release of the next instalment, Jurassic World on June 4 this year. These films give an impression that science might be really be capable of bringing back a living dinosaur. The latest outing goes even further than the previous films, where only dinosaurs that once existed were recreated. But is this all really possible? Can scientists clone dinosaurs?" The 1993 movie "Jurassic Park" wasn't the first film to show dinosaurs in the modern world. 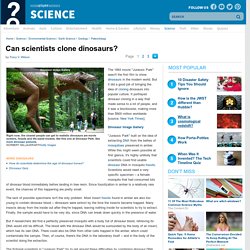 But it did a good job of bringing the idea of cloning dinosaurs into popular culture. It portrayed dinosaur cloning in a way that made sense to a lot of people, and it was a blockbuster, making more than $900 million worldwide [source: New York Times]. Earth - Chicken grows face of dinosaur. Sixty-five million years ago, an asteroid is believed to have crashed into Earth. 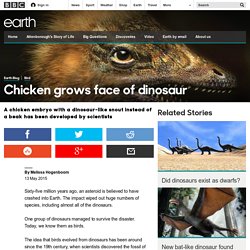 The impact wiped out huge numbers of species, including almost all of the dinosaurs. One group of dinosaurs managed to survive the disaster. Today, we know them as birds. The idea that birds evolved from dinosaurs has been around since the 19th century, when scientists discovered the fossil of an early bird called Archaeopteryx. Jurassic World: How Dinosaurs Are Making a Real Comeback, Thanks to Science. By Michael Miller @write_miller Jurassic World's genetically modified super-dino, the Indominus Rex, may seem like science fiction, but paleontologists and geneticists are closer than you might think to splicing dinosaurs back into existence. 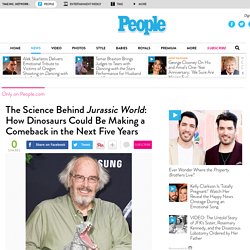 But before they can recreate a terrifying, 40-foot-long killing machine (assuming they still want to after watching the movie), scientists are starting smaller – with many believing the key to bringing back dinosaurs lies in none other than the modern day chicken. Famed paleontologist Dr. Jack Horner, who's been a consultant on all four films and is the real-life inspiration for Jurassic Park's dinosaur expert Dr. When he first started advising Steven Spielberg, Horner and his colleagues believed the most viable way to bring a dino back to life was through tapping into ancient strands of genetic code. Since then, further study into the way DNA degrades over time has ruled that option out. Are you ready for Jurassic World? Hello, Jurassic Park? Scientists create chickens with dinosaur features. Scientists for the first time have created animals with dinosaur features using fossils as a guide. 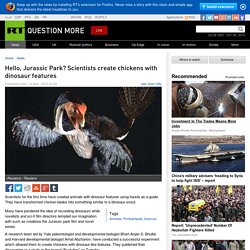 They have transformed chicken beaks into something similar to a dinosaur snout. Many have pondered the idea of recreating dinosaurs while novelists and sci-fi film directors tempted our imagination with such as creations the Jurassic park film and novel series. A research team led by Yale paleontologist and developmental biologist Bhart-Anjan S. Bhullar and Harvard developmental biologist Arhat Abzhanov, have conducted a successful experiment which allowed them to create chickens with dinosaur-like features. They published their discoveries in a study in the journal “Evolution” on Tuesday. Researchers were able to transform chicken embryos in a laboratory into specimens with a snout and palate configuration similar to that of small dinosaurs such as Velociraptor and Archaeopteryx, according to a Yale press-release published on Tuesday.

Paleontologist Jack Horner is hard at work trying to turn a chicken into a dinosaur. In 2009, the world’s most famous paleontologist made a bold claim. 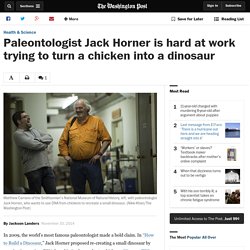 In “How to Build a Dinosaur,” Jack Horner proposed re-creating a small dinosaur by reactivating ancient DNA found in its descendants, chickens. His 2011 TED talk on the subject went viral. And then for the past four years, the public heard nothing. While the Internet moved on to other viral videos and ideas, Horner and his team have been working on the “chickenosaurus” and moving ahead the science of evolutionary development.