Cvr 721229. The Final Eight Minutes. By Lexi Krock Posted 10.17.06 NOVA On March 27, 1977, on the island of Tenerife in the Canary Islands, two 747 jumbo jets collided on a fog-shrouded runway, killing 583 people in what is still the deadliest crash in aviation history. 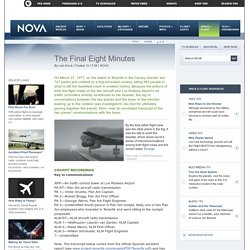 Because the actions of both the flight crews of the two aircraft and Los Rodeos Airport's air traffic controllers directly contributed to the disaster, the log of conversations between the two planes and the tower in the minutes leading up to the collision was investigators' key tool for ultimately piecing together the events. Here, read an annotated transcript of the two planes' communications with the tower.

By the time either flight crew saw the other plane in the fog, it was too late to avert the disaster, which arose out of a series of miscommunications among both flight crews and the control tower. Enlarge Photo credit: © WGBH Educational Foundation Cockpit Recordings Key to communications The Final Minutes 1658:21.5 APP: KLM—ah—4805, roger. PA? PA1: No, uh. 583 Killed as 747s Collide on Tenerife Runway. Pan Am Flight 1736 from Los Angeles via New York and KLM Flight 4805 from Amsterdam had been scheduled to land at Las Palmas, the capital of the Canary Islands, on the afternoon of March 27, 1977. 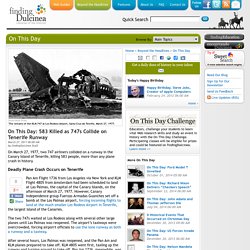 However, Canary independence group Fuerzas Armadas Guanches set off a bomb at the Los Palmas airport, forcing incoming flights to land at the much smaller Los Rodeos Airport in Tenerife, the largest island of the Canaries. The two 747s waited at Los Rodeos along with several other large planes until Las Palmas was reopened.

The airport’s taxiways were overcrowded, forcing airporrt officials to use the lone runway as both a runway and a taxiway. After several hours, Los Palmas was reopened, and the Pan Am and KLM planes prepared to take off. KLM 4805 went first, taxiing up the runway and turning around to take off. Due to a misunderstanding with flight control, KLM pilot Jacob Veldhuyzen van Zanten decided to takeoff before receiving proper clearance. 1977: Hundreds dead in Tenerife plane crash. 1977: Hundreds dead in Tenerife plane crash At least 560 people have died after two jumbo jets collided on a runway in the holiday destination of Tenerife. 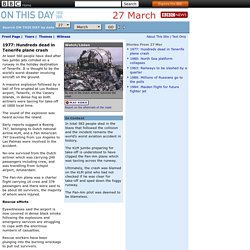 It is thought to be the world's worst disaster involving aircraft on the ground. A massive explosion followed by a ball of fire erupted at Los Rodeos airport, Tenerife, in the Canary Islands, in dense fog as both airliners were taxiing for take-off at 1800 local time. The sound of the explosion was heard across the island. Early reports suggest a Boeing 747, belonging to Dutch national airline KLM, and a Pan American 747 travelling from Los Angeles to Las Palmas were involved in the accident.

No-one survived from the Dutch airliner which was carrying 249 passengers including crew, and was travelling from Schipol airport, Amsterdam. The Pan-Am plane was a charter flight carrying 16 crew and 378 passengers and there were said to be about 60 survivors, the majority of whom were injured. Rescue efforts. Lessons Learned. Photo of PH-BUFPhoto copyright Bill Sheridan - used with permission Photo of N736PAPhoto copyright Jean-Francois Denis - used with permission. 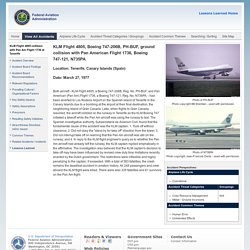 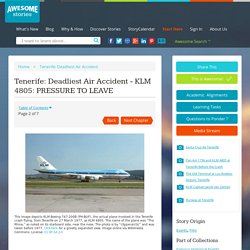 The name of the plane was “The Rhine,” as noted on its starboard side, near the nose. The photo is by "clipperarctic" and was taken before 1977. Click here for a greatly expanded view. Image online via Wikimedia Commons; License: CC BY-SA 2.0 When Pan Am 1736 ("Clipper 1736") landed at Tenerife (about 30 minutes after KLM 4805 had arrived), the weather was clear and sunny. Pilots and passengers diverted to Tenerife hoped they would soon be on their way to Las Palmas. With its passengers still on board, the Pan American Clipper would also have been able to make a quick departure - except for one major problem. Worse, Las Palmas no longer had an available gate for the KLM plane. KLM-Panam Tenerife Disaster - Go Flight Medicine.