The War of the Currents: AC vs. DC Power. It’s #GridWeek on Energy.gov. 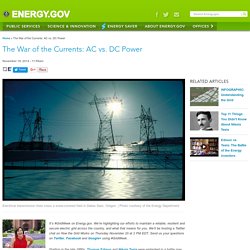 We’re highlighting our efforts to maintain a reliable, resilient and secure electric grid across the country, and what that means for you. We’ll be hosting a Twitter chat on How the Grid Works on Thursday November 20 at 2 PM EDT. Send us your questions on Twitter, Facebook and Google+ using #GridWeek. Alternating Current (AC) vs. Direct Current (DC) Thunderstruck! 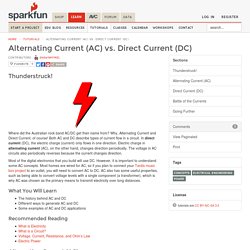 Where did the Australian rock band AC/DC get their name from? What is Alternating Current (AC)? : Basic AC Theory. Most students of electricity begin their study with what is known as direct current (DC), which is electricity flowing in a constant direction, and/or possessing a voltage with constant polarity. 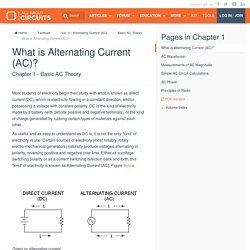 DC is the kind of electricity made by a battery (with definite positive and negative terminals), or the kind of charge generated by rubbing certain types of materials against each other. As useful and as easy to understand as DC is, it is not the only “kind” of electricity in use. Certain sources of electricity (most notably, rotary electro-mechanical generators) naturally produce voltages alternating in polarity, reversing positive and negative over time. Alternating Current (AC) Electricity - Physics Lessons: School for Champions by Ron Kurtus. 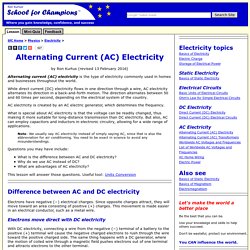 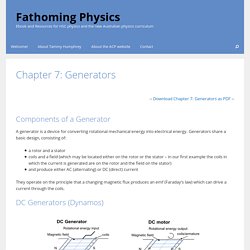 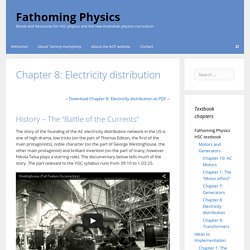 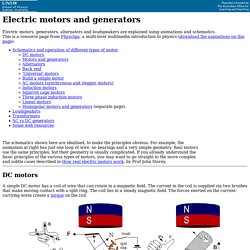 This is a resource page from Physclips, a multi-level multimedia introduction to physics (download the animations on this page). DC motors A simple DC motor has a coil of wire that can rotate in a magnetic field. The current in the coil is supplied via two brushes that make moving contact with a split ring. The coil lies in a steady magnetic field. The Alternating Current Generator. Next: The Direct Current Generator Up: Magnetic Induction Previous: Eddy Currents An electric generator, or dynamo, is a device which converts mechanical energy into electrical energy. 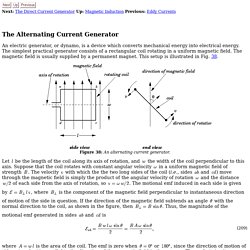 The simplest practical generator consists of a rectangular coil rotating in a uniform magnetic field. The magnetic field is usually supplied by a permanent magnet. This setup is illustrated in Fig. 38. Let. Simple explanation of a generator. Working Principle of DC Generator (explain with 3D animation) Basic construction and working of a DC Generator. A dc generator is an electrical machine which converts mechanical energy into direct current electricity. 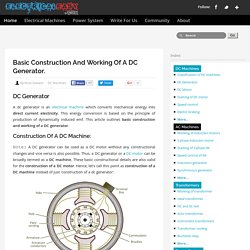 Thomas Edison and the AC/DC Battle. Westinghouse (Full Feature Documentary) Edison vs. Westinghouse: A Shocking Rivalry. Power struggles - Edison & Westinghouse. One thing physics is good for is deciding who is right, even when large sums of money, titanic egos, and political influence are all involved. 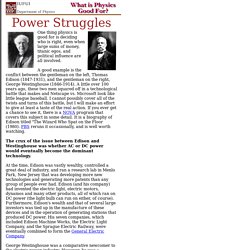 A good example is the conflict between the gentleman on the left, Thomas Edison (1847-1931), and the gentleman on the right, George Westinghouse (1846-1914). A little over 100 years ago, these two men squared off in a technological battle that makes and Netscape vs. Microsoft look like little league baseball. I cannot possibly cover all of the twists and turns of this battle, but I will make an effort to give at least a taste of the real action. If you ever get a chance to see it, there is a NOVA program that covers this subject in some detail. Edison vs. Westinghouse: A Shocking Rivalry. AC/DC: The Tesla–Edison Feud. You’ve probably heard about the famous rivalry between Nikola Tesla and Thomas Edison—both giants of electrical engineering whose innovations changed history. But what exactly was their history with one another? That whole boss/employee thing. Tesla, a Serbian by parentage, began working for the phone company in Budapest.

In 1882, he headed for Paris, where he took a job with the Continental Edison Company. He was invited to work stateside after his supervisor wrote a recommendation praising the young man as a genius on par with Edison himself. Clash of the methods. The conflict between Edison and Westinghouse. ‘Pylons, those pillars Bare like nude, giant girls that have no secrets' I was only one year old when Spender's poem was written but pylons were not part of my childhood or early manhood (nor were nude girls, come to think of it). I was brought up in a part of rural Wales which no- one thought worth supplying with electricity.

Our lucubrating, such as it was, relied on candles, single and double wick oil lamps, and then, joy unconstrained, oil lamps with Welsbach's incandescent mantles. Incidentally, it was Welsbach's invention, together with an efficient gas industry, which set back Britain's adoption of electric lighting by a decade or more, and gave our foreign competitors such an advantage. Tesla - Master of Lightning: War of the Currents. In November and December of 1887, Tesla filed for seven U.S. patents in the field of polyphase AC motors and power transmission. These comprised a complete system of generators, transformers, transmission lines, motors and lighting. So original were the ideas that they were issued without a successful challenge, and would turn out to be the most valuable patents since the telephone. An adventurous Pittsburgh industrialist named George Westinghouse, inventor of railroad air brakes, heard about Tesla's invention and thought it could be the missing link in long-distance power transmission.

He came to Tesla's lab and made an offer, purchasing the patents for $60,000, which included $5,000 in cash and 150 shares of stock in the Westinghouse Corporation. He also agreed to pay royalties of $2.50 per horsepower of electrical capacity sold. With the breakthrough provided by Tesla's patents, a full-scale industrial war erupted. The Columbian Exposition opened on May 1, 1893.