PLAN OF MANAGEMENT Area of Cultural Significance & Natural Areas Wetlands – North Cronulla Heritage Dune. State of the beaches 2015-2016. 40 years of sand dune rehabilitation at Cronulla - Soil Conservation Service. Key achievements In 1974, the Soil Conservation Service (SCS) commenced Sydney’s largest dune stabilisation project.SCS has succeeded in stopping the severe erosion of the peninsula, which was moving at up to 15 metres per year inland.The original 10-year program has expanded into decades of continued work and maintenance.SCS work has enabled vegetative stabilisation and progressive natural deposits of wind-blown sands into the dunes of the peninsula.These works have altered what was a sediment budget deficit and long term shoreline recession to a stable sediment budget.SCS work has protected investments made in the original 10-year program and continues the rehabilitation process.The SCS rehabilitation program has strengthened dune stability and enables a flexible response to changing land use pressures. 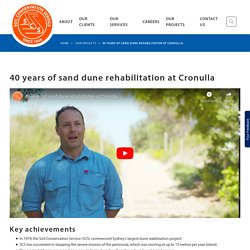 The challenge Since European contact, the 93-hectare native sand dune system on the Kurnell Peninsula has been heavily impacted by human activities. Work undertaken Benefits. Sand dunes collapse into sea at Elouera beach with erosion expected to spread. Elouera beach has suffered substantial erosion, and Cronulla and North Cronulla beaches are also expected to be battered today by the second East Coast Low in a fortnight. 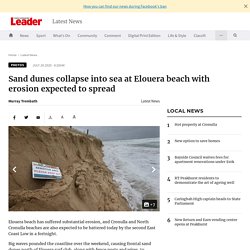 Big waves pounded the coastline over the weekend, causing frontal sand dunes north of Elouera surf club, along with fence posts and wires, to collapse into the heaving surf. Normally, there would be 10-20 metres of beach between the dunes and waterline. Instead, waves were crashing into the dunes. Ironically, the dunes have been deliberately built up in recent years in an effort to reduce erosion. A Cronulla veteran surfer said on Monday the swell in the second East Coast Low wasn't due to peak as big as in the previous intense low pressure system, but the waves were coming more from the east-straight onto the already eroded frontal dunes. "Wanda and Greenhills were more affected in the last swell," he said. Council workers have erected barricades across beach access tracks. Cronulla beaches closed and barricades erected on dangerous sectionsMoodle. All Cronulla beaches have been closed as strong winds and heavy swells continue to affect much of the coastline. 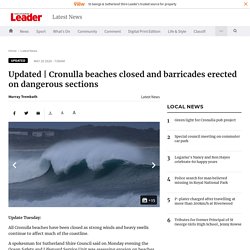 A spokesman for Sutherland Shire Council said on Monday evening the Ocean Safety and Lifeguard Service Unit was assessing erosion on beaches from Cronulla to Wanda and barricading those areas deemed to pose a safety risk. "It is envisaged at this stage that all council monitored beaches will be closed for the next few days, with challenging conditions expected to continue to bear down upon much of the state's coastline," he said. Huge seas on the weekend caused extensive erosion along Cronulla beaches for the second time in three months. Thousands of cubic metres of sand were sucked out to sea by the pounding waves.

Waves crashed over sections of the Esplanade, with water knee-deep in the outside section of Zimzala restaurant at high tide on Friday night. Sand cliffs were left by the receding tide at Wanda beach. "They had their shoes off and were enjoying the whole experience. 1986 Storm at Cronulla - Water Research Laboratory. Human Impact on the Australian Coast from Coastal Management in Australia on JSTOR. Bate Bay Coastline Management Plan. Cronulla then and now: How the suburb’s iconic 15,000-year-old sand dunes are being destroyed. Cronulla's iconic 15,000-year-old rolling sand dunes are being destroyed by housing estates and industrial buildings constructed along the shoreline. 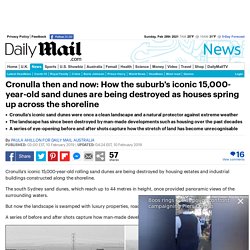 Sea-level rise a major threat to Sydney's beaches. 29 Oct 2008 By Marian Wilkinson and Ben Cubby of The Sydney Morning Herald.October 29, 2008 Read the full story on the SMH website SYDNEY'S iconic beaches, coastal houses, commercial property and roads will be threatened by rising sea levels by 2050, while the city's temperature is expected to rise by at least 2 degrees, a new scientific study, launched by the Premier, Nathan Rees, reveals. 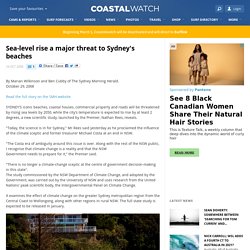 "Today, the science is in for Sydney," Mr Rees said yesterday as he proclaimed the influence of the climate sceptic and former treasurer Michael Costa at an end in NSW. "The Costa era of ambiguity around this issue is over.