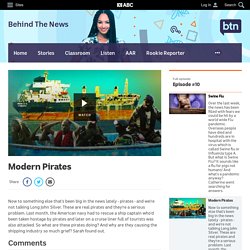 REPORTER: Thanks to Hollywood its all hats and eye patches and Arrrrrs. And you know, some of this get up is based on real pirates that terrorised the Carribean 300 years ago. Even the old Jolly Roger was really flown to scare crews before they were attacked. There are still pirates today but they look very different. It might look like a scene from Top Gun but these heavily-armed war ships are hunting pirates. REPORTER: So what is it that's dragged pirates out of the history books and into the headlines? This ABC journalist went there to have a look. SOMALIAN MINISTER: Welcome to Boosaaso. This is a province of Somalia called Puntland. Fishing used to be a huge industry here in Puntland. 6 Lady Pirates. The Swashbuckling History of Women Pirates. 5 Notorious Female Pirates. 1. 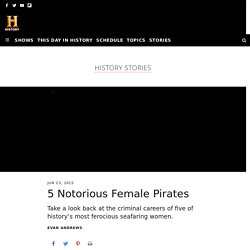 Cheng I Sao One of history’s most influential raiders began her career in a Chinese brothel. Cheng I Sao, or the “wife of Cheng,” was a Cantonese former prostitute who married a powerful corsair named Cheng I in 1801. The husband and wife team soon raised one of China’s most formidable pirate armies. Their outfit boasted hundreds of ships and some 50,000 men, and it preyed on the fishing vessels, supply junks and the coastal villages of Southern China with impunity.

Upon her husband’s death in 1807, Mrs. 2. The notorious pirate Anne Bonny began her life as the illegitimate daughter of a wealthy Irish lawyer. Bonny had always been known for her “fierce and courageous temper”—according to one legend, she nearly beat a man to death when he tried to force himself on her—and she quickly showed she could guzzle rum, curse and wield a pistol and cutlass with the best of Calico Jack’s crew. 3. 4. 5. Family dives into Amazon River to escape pirates. An American couple from California made a daring escape from pirates who attacked their boat on the Amazon River by jumping overboard and swimming to shore, towing their two young daughters on a surfboard, it was reported Saturday. 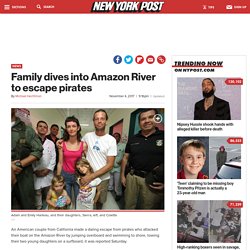 Adam Harris Harteau, his wife, Emily, and the girls, Colette, 6, and Sierra, 3, were passengers on a cargo boat sailing between the Brazilian cities of Belem and Macapa when the brigands boarded on Oct. 29. The Harteauses told authorities they stayed in their room for about 10 hours while the heavily armed buccaneers went about the business of stealing anything not nailed down, ABC News said. Chasing Pirates in the Amazon - Video - NYTimes.com. BBC World Service - Documentaries - Pirates. Crime on the high seas: The world’s most pirated waters. SINGAPORE — The Ai Maru steamed alone under night skies on June 14 when a speedboat slipped in from the darkness and overtook the tanker about 30 miles off the coast of Malaysia. 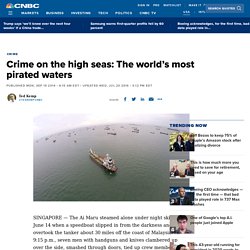 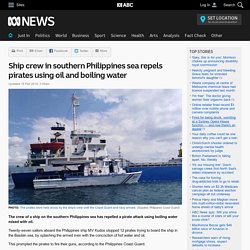 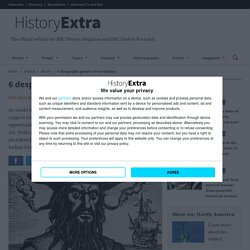 The age of colonial expansion meant that huge quantities of valuable cargoes were being shipped over vast ocean areas and, as European navies were reduced, many experienced sailors who were out of work turned to piracy. 8 Real-Life Pirates Who Roved the High Seas. 1. 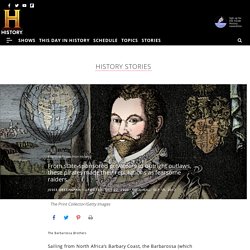 The Barbarossa Brothers Sailing from North Africa’s Barbary Coast, the Barbarossa (which means “red beard” in Italian) brothers Aruj and Hizir became rich by capturing European vessels in the Mediterranean Sea. Though their most lucrative early victims included two papal galleys and a Sardinian warship, they began targeting the Spanish around the time Aruj lost an arm to them in battle. By 1516 the Ottoman sultan had essentially put Aruj in charge of the entire Barbary Coast, a position that Hizir took over two years later following his brother’s death. Hizir, otherwise known as Khair-ed-Din, then spent the rest of his days fighting various Christian enemies, including a “Holy League” fleet specifically formed by the pope to destroy him. 2. Sir Francis Drake Francis Drake, nicknamed “my pirate” by Queen Elizabeth I, was among the so-called “Sea Dog” privateers licensed by the English government to attack Spanish shipping. 3. 4.

Pirate 101: A Brief History of Piracy. Piracy in ancient Greece.