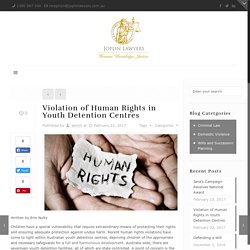 Recent human rights violations have come to light within Australian youth detention centres, depriving children of the appropriate and necessary safeguards for a full and harmonious development. Juvenile detention - Creative Spirits. Juvenile detention statistics Up to 70% of detained children were remanded simply for breaching bail conditions, and the time on remand is getting longer and longer [14]. 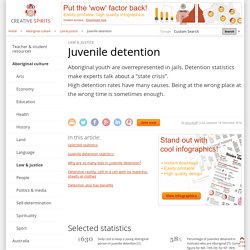 In 2009 around 300 juveniles were arrested for breach of bail each month, up from about 100 in 2000. Aboriginal children and teenagers are 24 times more likely to be incarcerated than their non-Aboriginal peers, and more than twice that rate in Western Australia [20]. The gap in incarceration rates has grown every year since 2010-11. Abuse in youth detention is not restricted to the Northern Territory - theconversation. The controversy over the appalling treatment of young people in the Don Dale detention centre and the announcement of a royal commission into juvenile detention in the Northern Territory raises some important questions about how we arrived at this point. 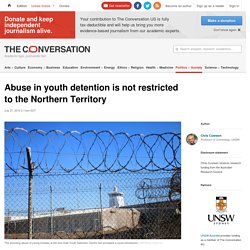 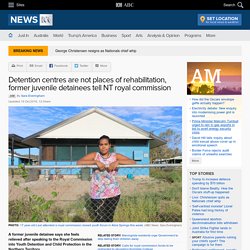 Lexi, 17, was among a small group of former juvenile inmates who attended a royal commission closed youth forum in Alice Springs this week. Media player: "Space" to play, "M" to mute, "left" and "right" to seek. Audio: Listen to Sara Everingham's story (AM) Youth detention around Australia: Media Mash-Up: Rule of Law Institute of Australia. The recent Four Corners story on youth detention in the Northern Territory has sparked interest in and concern about the issue. 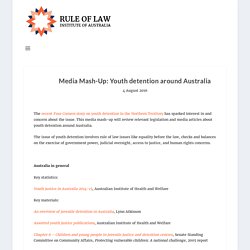 This media mash-up will review relevant legislation and media articles about youth detention around Australia. The issue of youth detention involves rule of law issues like equality before the law, checks and balances on the exercise of government power, judicial oversight, access to justice, and human rights concerns. Human rights standards in youth detention facilities in Australia: the use of restraint, disciplinary regimes and other specified practices.