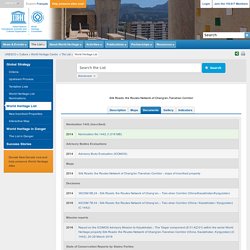 Join the 110,617 Members. Silk Roads: the Routes Network of Chang'an-Tianshan Corridor. Outstanding Universal Value Brief synthesis The Silk Roads were an interconnected web of routes linking the ancient societies of Asia, the Subcontinent, Central Asia, Western Asia and the Near East, and contributed to the development of many of the world's great civilizations. 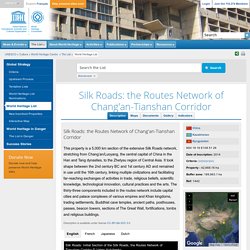 They represent one of the world’s preeminent long-distance communication networks stretching as the crow flies to around 7,500 km but extending to in excess of 35,000 km along specific routes. About the Silk Road. About the Silk Roads Introduction Human beings have always moved from place to place and traded with their neighbours, exchanging goods, skills and ideas. 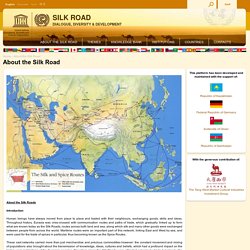 Throughout history, Eurasia was criss-crossed with communication routes and paths of trade, which gradually linked up to form what are known today as the Silk Roads; routes across both land and sea, along which silk and many other goods were exchanged between people from across the world. Maritime routes were an important part of this network, linking East and West by sea, and were used for the trade of spices in particular, thus becoming known as the Spice Routes.

These vast networks carried more than just merchandise and precious commodities however: the constant movement and mixing of populations also brought about the transmission of knowledge, ideas, cultures and beliefs, which had a profound impact on the history and civilizations of the Eurasian peoples. United Nations Educational, Scientific and Cultural Organization. Questions About: Archaeology As A Career. Where do archaeologists work? 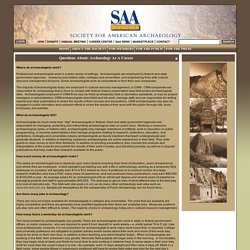 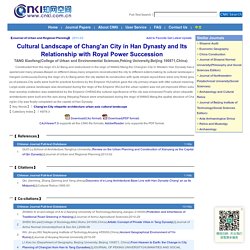 20110923153541775. 卷八 高祖本纪第八-中国社会科学网. 作家朱鸿：丝绸之路起点精确地址在未央宫-中国社会科学网. 大遗址区城市改造与提升及区域可持续发展研究-中国社会科学网. Zhang Qian: Pioneer Explorer of the Route to the West. Zhang Qian (張騫) is venerated as the pioneer of diplomacy and trade who opened up China to the world and paved the way for the development of East-West cultural and economic exchange through his two missions to the regions west of China during the Han Dynasty (漢朝) (206 B.C. 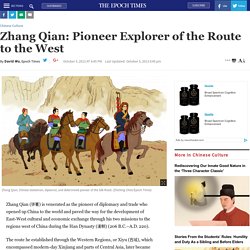 –A.D. 220). The route he established through the Western Regions, or Xiyu (西域), which encompassed modern-day Xinjiang and parts of Central Asia, later became known as the famous Silk Road (絲綢之路). Ever since the establishment of the Han Dynasty, the nomadic Xiongnu (匈奴) (centuries later they were to be referred to as Huns) had been the most threatening enemy from the north and west. 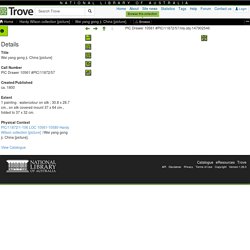 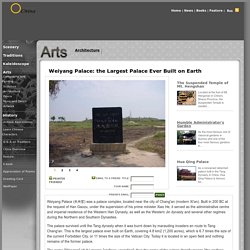 Built in 200 BC at the request of Han Gaozu, under the supervision of his prime minister Xiao He, it served as the administrative centre and imperial residence of the Western Han Dynasty, as well as the Western Jin dynasty and several other regimes during the Northern and Southern Dynasties. The palace survived until the Tang dynasty when it was burnt down by marauding invaders en route to Tang Chang'an. This is the largest palace ever built on Earth, covering 4.8 km2 (1,200 acres), which is 6.7 times the size of the current Forbidden City, or 11 times the size of the Vatican City. 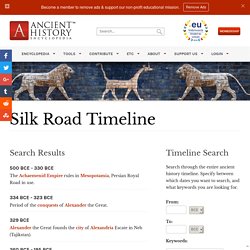 C. 200 BCEFirst contact between China and the Greco-Bactrian descendents of Alexander the Great's army. 171 BCE - 138 BCEReign of Mithridates I of Parthia. 138 BCEHan Emperor Wu the Great sends his emissary Zhang Qian to the west, initiating commerce. 27 BCE - 14 CEReign of Augustus Caesar in Rome, Chinese silk is very popular. 527 CE - 565 CEReign of Emperor Julian of the Eastern Roman (Byzantine) Empire. Beginning of Byzantine silk industry. Visual Timeline To navigate the timeline, click and drag it with your mouse, or click on the timeline overview on the bottom. Silk Road Trade: History Of Gunpowder. No overland route in the history of humanity has ever been surrounded by as much intrigue and mystique as the mythology-shrouded trade route known as the Silk Road. 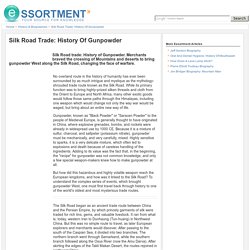 While its primary function was to bring highly-prized silken threads and cloth from the Orient to Europe and North Africa, many other exotic goods would follow those same paths through the Himalayas, including one weapon which would change not only the way war would be waged, but bring about an entire new way of life. Gunpowder, known as "Black Powder" or "Saracen Powder" to the people of Medieval Europe, is generally thought to have originated in China, where explosive grenades, bombs, and rockets were already in widespread use by 1000 CE. Because it is a mixture of sulfur, charcoal, and saltpeter (potassium nitrate), gunpowder must be mechanically, and very carefully, mixed. Highly sensitive to sparks, it is a very delicate mixture, which often led to explosions and death because of careless handling of the ingredients. Silk Roads: the Routes Network of Chang'an-Tianshan Corridor. Trade History of the Silk Road, Spice & Incense Routes.

Silk Road Trade & Travel Encyclopedia 丝绸之路网站（丝路网站） 丝绸之路百科全书—游客、学生和教师的参考资源İPEK YOLU ve YOLLARI ANSİKLOPEDİSİ Trade History of the Silk Road, Spice & Incense Routes Frankincense from Arabia, silks from China, spices of southeast Asia. Maps Incense, Spice, Silk Routes (overland & maritime) Gun and Gunpower. Gunpower Along with the silk and paper, gunpowder is another invention by Chinese and the Silk Road helped it spread to the west. The dating of gunpowder is as early as 850 A.D. This invention seems to have been discovered in China by accident - by alchemists seeking the elixir of immortality. History of Silk. (Sogdian silk, 8th century) Sericulture or silk production has a long and colorful history unknown to most people. For centuries the West knew very little about silk and the people who made it. Pliny, the Roman historian, wrote in his Natural History in 70 BC "Silk was obtained by removing the down from the leaves with the help of water…".