Public Worlds : Hong Kong : Culture and the Politics of Disappearance. 香港殖民地时期受英国的影响_百度知道. Treaty of Nanjing (Nanking), 1842. A Culture of Emigration. The numbers tell part of the story of the brain drain. 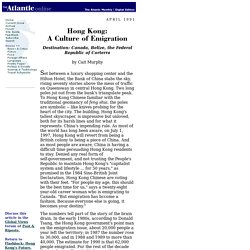 In the early 1980s, according to Donald Tsang, the Hong Kong government's point man on the emigration issue, about 20,000 people a year left the territory; in 1987 the number rose to 30,000, and in 1988 and 1989 to more than 40,000. The estimate for 1990 is that 62,000 people emigrated. For the rest of the decade the numbers will probably be even higher, swelled by people who decided after the Beijing massacre, in June of 1989, that Deng Xiaoping's word was not assurance enough to bet their lives on.

In gross terms, the problem is bad enough: 62,000 people is more than one percent of Hong Kong's population. But it is the kind of people who are leaving that has made emigration a critical issue. Report on Hong Kong, November, 1967. China itself has made no overt move toward the colony -- in fact, on at least a dozen occasions Chinese Army troops have actually held back mobs of mainland Chinese hopped up on Maoist brew. 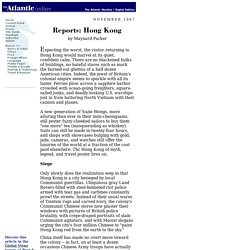 But months of agitation, which has slowly escalated from labor strikes to militant demonstrations to violent riots and armed terrorist attacks, have clearly signaled the beginning of a Maoist "people's war" against the British in their own colony. The British fight with more than 12,000 police and 10,000 soldiers to preserve both the political status quo and extraordinary economic prosperity through a campaign maintaining law and order. Edge of Empires : Chinese Elites and British Colonials in Hong Kong. Page 3597 London Gazette. Chinese Diplomacy and the Treaty of Nanking, 1842 on JSTOR. Treaty of Nanjing.PDF. 1898, Hong Kong (Br.) HONG-KONG. Modern History Of Hong Kong. Social Security Policy in Hong Kong : From British Colony to China's Special Administrative Region. Asia's Transformations : Hong Kong's History : State and Society Under Colonial Rule (1) Treaty of Nanking - Wikipedia. The Treaty of Nanking or Nanjing was a peace treaty which ended the First Opium War (1839–42) between the United Kingdom and the Qing dynasty of China on 29 August 1842. 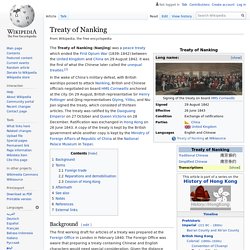 It was the first of what the Chinese later called the unequal treaties on the ground that Britain had no obligations in return.[2] Terms[edit] Foreign trade[edit] The fundamental purpose of the treaty was to change the framework of foreign trade imposed by the Canton System, which had been in force since 1760. Under Article V, the treaty abolished the former monopoly of the Cohong and their Thirteen Factories in Canton. British Imperialism in China. 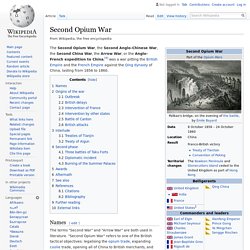 Names[edit] The terms "Second War" and "Arrow War" are both used in literature. "Second Opium War" refers to one of the British tactical objectives: legalising the opium trade, expanding coolie trade, opening all of China to British merchants, and exempting foreign imports from internal transit duties. [citation needed] The "Arrow War" refers to the name of a vessel which became the starting point of the conflict. Origins of the war[edit] First Opium War - Wikipedia. The First Opium War (第一次鴉片戰爭, 1839–42), also known as the Opium War and the Anglo-Chinese War, was fought between the United Kingdom and the Qing dynasty over their conflicting viewpoints on diplomatic relations, trade, and the administration of justice for foreign nationals in China.[5] In the 17th and 18th centuries, the demand for Chinese goods (particularly silk, porcelain, and tea) in the European market created a trade imbalance because the market for Western goods in China was virtually non-existent; China was largely self-sufficient and Europeans were not allowed access to China's interior. 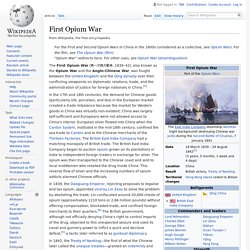 European silver flowed into China when the Canton System, instituted in the mid-18th century, confined the sea trade to Canton and to the Chinese merchants of the Thirteen Factories. The British East India Company had a matching monopoly of British trade. Background: European trade with Asia[edit] Google Docs - Reserch. British Imperialism in China. By Tao He The primary motive of British imperialism in China in the nineteenth century was economic. 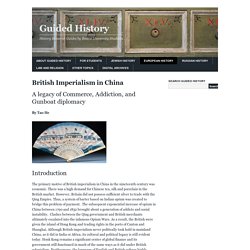 There was a high demand for Chinese tea, silk and porcelain in the British market. However, Britain did not possess sufficient silver to trade with the Qing Empire. Thus, a system of barter based on Indian opium was created to bridge this problem of payment.