Barriers to Secondary Education in Tanzania. I liked to study so that I could have a wide mind. 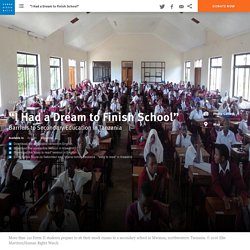 There was nothing I didn’t like [to study]. I had a dream to finish school and go to college, graduate, and work as an accountant. Tanzania0217 accessible. School Doors Closed for Millions. (London) – Discriminatory laws and policies and a lack of political will to carry out basic human rights obligations by countries around the globe are keeping millions of children and adolescents out of school, Human Rights Watch said in a report released today. 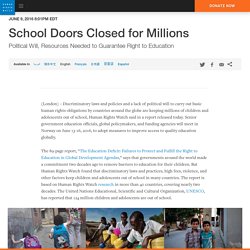 Senior government education officials, global policymakers, and funding agencies will meet in Norway on June 13-16, 2016, to adopt measures to improve access to quality education globally. The 89-page report, “The Education Deficit: Failures to Protect and Fulfill the Right to Education in Global Development Agendas,” says that governments around the world made a commitment two decades ago to remove barriers to education for their children. But Human Rights Watch found that discriminatory laws and practices, high fees, violence, and other factors keep children and adolescents out of school in many countries.

The report is based on Human Rights Watch research in more than 40 countries, covering nearly two decades. UIS Tellmaps. Children's Rights. Tanzania: 1.5 Million Adolescents Not in School. (Dar es Salaam) – More than 40 percent of Tanzania’s adolescents are left out of quality lower-secondary education despite the government’s positive decision to make lower-secondary education free. 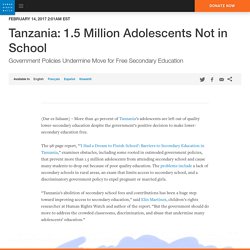 The 98-page report, “‘I Had a Dream to Finish School’: Barriers to Secondary Education in Tanzania,” examines obstacles, including some rooted in outmoded government policies, that prevent more than 1.5 million adolescents from attending secondary school and cause many students to drop out because of poor quality education. The problems include a lack of secondary schools in rural areas, an exam that limits access to secondary school, and a discriminatory government policy to expel pregnant or married girls. Defending Human Rights Worldwide. Failures to Protect and Fulfill the Right to Education through Global Development Agendas. This serves as a grim reminder that the world has yet to fulfil its original promise to provide every children with a primary education by 2015. — UNESCO, Global Education Monitoring Report, 2015 Millions of children have no access to education, or in some cases, interrupt their education, because of ongoing human rights abuses, and governments’ failures to provide adequate protections they are entitled to under the Convention on the Rights of the Child (CRC) or to counter abuses perpetrated by state and non-state actors. 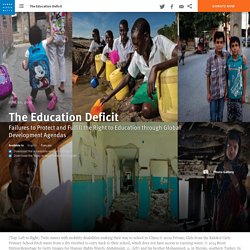 All children have a right to go to school, to have equal access to education at all levels, and to be guaranteed a quality education. While many governments have focused on legislating the right to primary education, the right to secondary education—both lower and higher—remains unprotected and unfulfilled in many countries. Document. Take Action Now - Amnesty International USA.

The government of Sierra Leone has a policy that excludes pregnant girls from attending schools and taking exams. 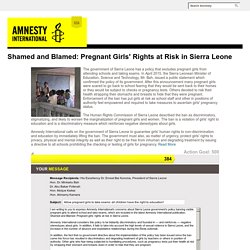 In April 2015, the Sierra Leonean Minister of Education, Science and Technology, Mr. Bah, issued a public statement which confirmed the policy of its government. After this announcement many pregnant girls were scared to go back to school fearing that they would be sent back to their homes or they would be subject to checks or pregnancy tests. Others decided to risk their health strapping their stomachs and breasts to hide that they were pregnant. Understanding education as a right. Human rights are inherent to all human beings, regardless of nationality, sex, national or ethnic origin, colour, religion, language, or any other status. 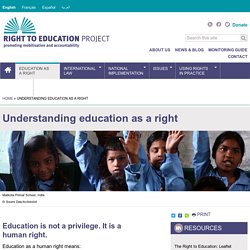 They cannot be given or taken away. Human rights are the foundation for freedom, justice and peace in the world. The Right to Education. Education is a fundamental human right and essential for the exercise of all other human rights. 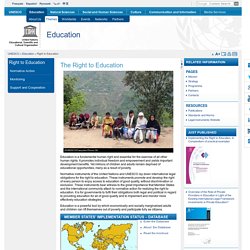 It promotes individual freedom and empowerment and yields important development benefits. Yet millions of children and adults remain deprived of educational opportunities, many as a result of poverty. Normative instruments of the United Nations and UNESCO lay down international legal obligations for the right to education. The Right to Education. Human Rights Education and Training.