What stress is to residential stepmothers?

Stress can be good and bad. When we face too much stress it can be harmful to our body and minds. Here, we will look at some factors that can cause a residential stepmother to feel stressed and how she can cope with the stress effectively.

Psychology Today Singapore. Stress generally refers to two things: the psychological perception of pressure, on the one hand, and the body's response to it, on the other, which involves multiple systems, from metabolism to muscles to memory. 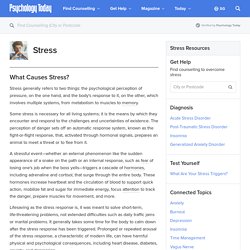 Some stress is necessary for all living systems; it is the means by which they encounter and respond to the challenges and uncertainties of existence. The perception of danger sets off an automatic response system, known as the fight-or-flight response, that, activated through hormonal signals, prepares an animal to meet a threat or to flee from it. A stressful event—whether an external phenomenon like the sudden appearance of a snake on the path or an internal response, such as fear of losing one's job when the boss yells—triggers a cascade of hormones, including adrenaline and cortisol, that surge through the entire body. Stress? Residential Stepmothers are more stressed. A non-residential stepmother. A Residential Stepmother. Depressive Symptoms Residential Stepmothers. Life as a stepmother is no fairytale – I feel sorry for my wife.

I have been reading a book that contains some surprising information about stepmothers. 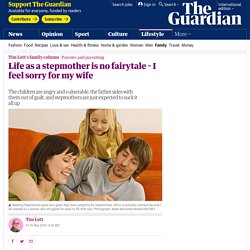 They are not necessarily wicked, after all. For wickedness is the role they are assigned, according to Stepmonster by Wednesday Martin. This is due to the inheritance of myth and fairytale, but also the pressures of the situation in which they are required to survive. In a remarriage where children from a previous marriage are involved, everyone is in a difficult position. The children are vulnerable and angry, because their secret fantasy that their parents might reunite is destroyed. Such difficulties are acknowledged. But it’s not that simple. Yet the act of trying to connect with a child who isn’t their own means the stepmother is likely to be rejected, time and time again – for acceptance represents to the child not only a betrayal of their biological mother, but also the denial of the stepmother’s attempt to be a substitute for that mother. @timlottwriter. The Real Reason Children (and Adults) Hate their Stepmothers.

Put the blame on Mame. 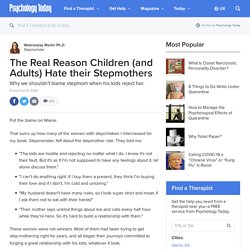 That sums up how many of the women with stepchildren I interviewed for my book, Stepmonster, felt about the stepmother role. They told me: "The kids are hostile and rejecting no matter what I do. I know it's not their fault. Depressive Symptoms among stepmothers. Stress residential stepmothers face. The evil stepmother stigma. Powerpuff girls with their "Stepmother" Feeling of not belonging. Taboo. Marrying the Situation.

10 Brutal truths of being a stepmother. You can tell from a quick glance at my blog bio that I'm a stepmother -- but I almost never write about it. 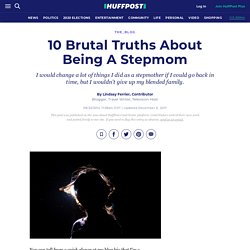 I've had several big reasons to steer clear of the topic. One, I'm not my stepdaughters' mom, and if I were, I don't think I'd be too happy if they had a stepmother writing about their lives on her blog. Two, throughout most of the time I've been blogging, my stepdaughters were teenagers and they certainly didn't need or want me to be writing about them at that sensitive time in their lives. Three, writing about step parenting while you're in the trenches of it is a lot like writing about divorce as you're going through it -- emotions are running rampant and very few writers can steer through the subject with grace and objectivity. Four, and this was a biggie, I often felt like the world's worst stepmother.

And who wants to write about that? To be fair, things started out great. Seriously? Somehow, we all muddled through adolescence and made it through to the other side. 1. 2. The Courage to Be a Stepmom. SPOILER ALERT! 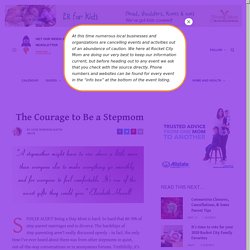 Being a Step Mom is hard. So hard that 60-70% of step-parent marriages end in divorce. The hardships of step-parenting aren’t really discussed openly – in fact, the only time I’ve ever heard about them was from other stepmoms in quiet, out-of-the-way conversations or in anonymous forums. Truthfully, it’s not even something I as a stepmom talk about much. But maybe that needs to change. Before I got married, one of my wise step-mother friends bought me a book, called The Courage To Be A Stepmom: Finding Your Place Without Losing Yourself by Sue Patton Thoele. Wicked Step Mother Fairy tales are full of these vengeful creatures, and it sticks. Advertisement. A Relationship Born of Loss Step-parents enter relationships born of loss. 10 Survival Tips for Stressed Out Stepmothers. Even though stepfamilies are here to stay, stepmothers are the ones who suffer the most. 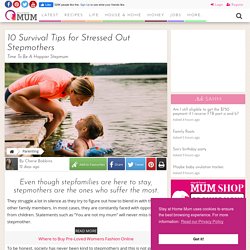 They struggle a lot in silence as they try to figure out how to blend in with the other family members. In most cases, they are constantly faced with opposition from children. Survival tips for stepmothers. Coping Strategies.