There’s a leadership crisis at SAA: Pilots:Tuesday 17 November 2015. SAA Chairperson Dudu Myeni has admitted there are problems between the airline and its pilots. 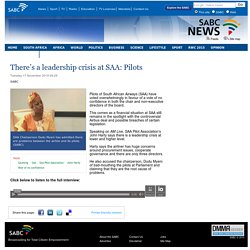 (SABC) Pilots of South African Airways (SAA) have voted overwhelmingly in favour of a vote of no confidence in both the chair and non-executive directors of the board. This comes as a financial situation at SAA still remains in the spotlight with the controversial Airbus deal and possible breaches of certain legislation. Speaking on AM Live, SAA Pilot Association’s John Harty says there is a leadership crisis at lower and higher level. Harty says the airliner has huge concerns around procurement issues, cooperate governance and there are only three directors. He also accused the chairperson, Dudu Myeni of bad-mouthing the pilots at Parliament and claiming that they are the root cause of problems. There’s a leadership crisis at SAA: Pilots:Tuesday 17 November 2015.

SAA, Airbus likely to meet soon over plans to revise deal:Monday 30 November 2015. It is understood that the Airbus recently gave the embattled national carrier “a few weeks” to put forward concrete plans for a revised deal. 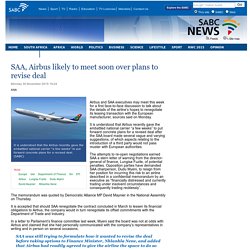 (SABC) Airbus and SAA executives may meet this week for a first face-to-face discussion to talk about the details of the airline’s hopes to renegotiate its leasing transaction with the European manufacturer, sources said on Monday. It is understood that Airbus recently gave the embattled national carrier “a few weeks” to put forward concrete plans for a revised deal after the SAA board made several vague and varying suggestions, of which aspects relating to the introduction of a third party would not pass muster with European authorities. The attempts to re-open negotiations earned SAA a stern letter of warning from the director-general of finance, Lungisa Fuzile, of potential penalties.

The memorandum was quoted by Democratic Alliance MP David Maynier in the National Assembly on Thursday. SAA retracts statement on CCO’s suspension :Saturday 21 November 2015. SAA says it did not mean to tarnish the image of it's Chief Commercial Officer. 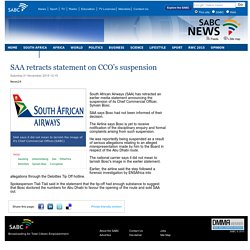 (SABC) South African Airways (SAA) has retracted an earlier media statement announcing the suspension of its Chief Commercial Officer, Sylvain Bosc. SAA says Bosc had not been informed of their decision. The Airline says Bosc is yet to receive notification of the disciplinary enquiry and formal complaints arising from such suspension. SAA concedes its dire situation, denies insolvency:Wednesday 25 November 2015. The airline has a third Acting Chief Executive in less than 12 months. 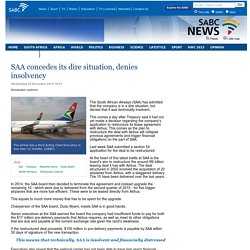 (SABC) The South African Airways (SAA) has admitted that the company is in a dire situation, but denied that it was technically insolvent. This comes a day after Treasury said it had not yet made a decision regarding the company's application to restructure its lease agreement with Airbus. SAA Chief Commercial Officer, Sylvain Bosc suspended:Saturday 21 November 2015. SAA Chief Commercial Officer, Sylvain Bosc. 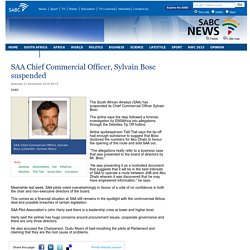 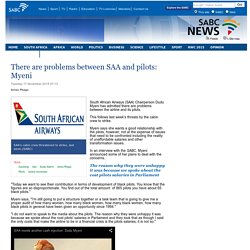 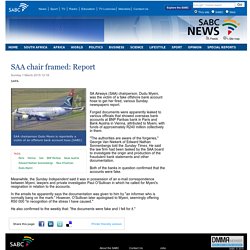 (SABC) SA Airways (SAA) chairperson, Dudu Myeni, was the victim of a fake offshore bank account hoax to get her fired, various Sunday newspapers report. Forged documents were apparently leaked to various officials that showed overseas bank accounts at BNP Paribas bank in Paris and Bank Austria in Vienna, attributed to Myeni, with funds of approximately R240 million collectively in them. "The authorities are aware of the forgeries," George Van Niekerk of Edward Nathan Sonnenbergs told the Sunday Times.

SAA mum on retrenchment details:Monday 9 March 2015. SAA says it is re-examining every aspect of the business in order to return the company to relative stability in the context of its 90 Day Action Plan(SAA) Cash-strapped South African Airways (SAA) declined to say on Monday how many workers the national carrier plans to retrench. 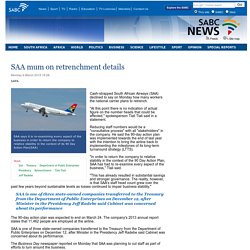 "At this point there is no indication of actual figure on the number heads that could be affected," spokesperson Tlali Tlali said in a statement. Reducing staff numbers would be a "consultative process" with all "stakeholders" in the company. SAA CEOs application to be heard in Labour Court:Thursday 9 April 2015. The suspended Chief Executive Officer of South African Airways (SAA) Monwabisi Kalawe, will have his application heard in the Labour Court in Johannesburg on Thursday. 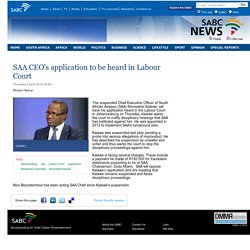 Kalawe wants the court to nullify disciplinary hearings that SAA has instituted against him. He was appointed in 2013 to implement SAA's turnaround plan. Kalawe was suspended last year pending a probe into serious allegations of misconduct. He has described his suspension as unlawful and unfair and thus wants the court to stop the disciplinary proceedings against him. Kalawe is facing several charges. Nico Bezuidenhout has been acting SAA Chief since Kalawe's suspension. 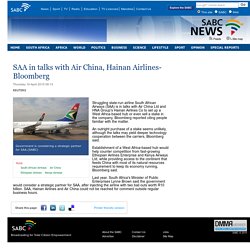 (SABC) Struggling state-run airline South African Airways (SAA) is in talks with Air China Ltd and HNA Group's Hainan Airlines Co to set up a West Africa-based hub or even sell a stake in the company, Bloomberg reported citing people familiar with the matter. An outright purchase of a stake seems unlikely, although the talks may yield deeper technology cooperation between the carriers, Bloomberg said. Establishment of a West Africa-based hub would help counter competition from fast-growing Ethiopian Airlines Enterprise and Kenya Airways Ltd, while providing access to the continent that feeds China with most of its natural resources requirement to keep its economy running, Bloomberg said.