Stories related to the Freedom Charter

SAHA releases TRC “secret” documents, new hope for victims:Wednesday 15 April 2015. During its seven years the TRC more than 28 000 victims and perpetrators shocked everyone with their accounts of unimaginable abuses committed under the apartheid government. 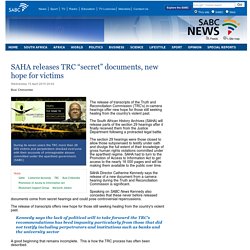 (SABC) The release of transcripts of the Truth and Reconciliation Commission (TRC's) in-camera hearings offer new hope for those still seeking healing from the country's violent past. The South African History Archives (SAHA) will release parts of the section 29 hearings after it finally received them from the Justice Department following a protracted legal battle. The section 29 hearings were those closed to allow those subpoenaed to testify under oath and divulge the full extent of their knowledge of gross human rights violations committed under the apartheid regime.

SAHA had to turn to the Promotion of Access to Information Act to get access to the nearly 16 000 pages and will be making them available to the public over time. A good beginning that remains incomplete. Kennedy of the SAHA echoes Jobson's sentiments. TRC business unfinished: Professor:Thursday 16 April 2015. Parole decisions trend on social media :Friday 30 January 2015. 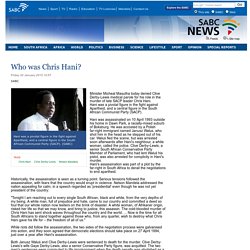 (SABC) Minister Micheal Masutha today denied Clive Derby-Lewis medical parole for his role in the murder of late SACP leader Chris Hani. Hani was a pivotal figure in the fight against Apartheid, and a central figure in the South African Communist Party (SACP). Hani was assassinated on 10 April 1993 outside his home in Dawn Park, a racially-mixed suburb of Boksburg.

He was accosted by a Polish far-right immigrant named Janusz Walus, who shot him in the head as he stepped out of his car. Historically, the assassination is seen as a turning point. "Tonight I am reaching out to every single South African, black and white, from the very depths of my being. Both Janusz Waluś and Clive Derby-Lewis were sentenced to death for the murder. About Chris Hani, in his own words: (The following brief autobiographical account was written by Chris Hani in February 1991.) De Kock believes FW should be in jail – friend:Friday 30 January 2015. Eugene de kock's long-time friend and political commentator, Professor Piet Croucamp speaks about his friendship with De Kock, De Kock’s view on his incarceration, and much more. 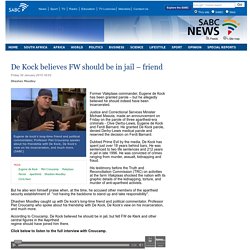 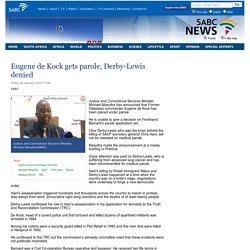 He is unable to give a decision on Ferdinand Barnard's parole application yet. Clive Derby-Lewis who was the brain behind the killing of SACP secretary general Chris Hani, will not be released on medical parole. Masutha made the announcement at a media briefing in Pretoria. Close attention was paid on Derby-Lewis, who is suffering from advanced lung cancer and has been recommended for medical parole. Hani's killing by Polish immigrant Walus and Derby-Lewis happened at a time when the country was on a knife's edge, negotiations were underway to forge a new democratic order.

Hani's assassination triggered hundreds and thousands across the country to march in protest, stay-aways from work, provocative right-wing reactions and the deaths of at least twenty people. D-Day for Apartheid era killers :Friday 30 January 2015. Mixed views on parole applications by ‘Apartheid criminals’:Friday 30 January 2015. Three of the country's most notorious apartheid criminals are waiting to hear their fate. 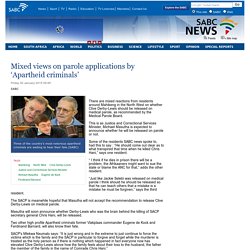 (SABC) There are mixed reactions from residents around Mahikeng in the North West on whether Clive Derby-Lewis should be released on medical parole, as recommended by the Medical Parole Board. This is as Justice and Correctional Services Minister, Michael Masutha is expected to announce whether he will be released on parole or not. Some of the residents SABC news spoke to, had this to say : “He should come out clear as to what transpired that time when he killed Chris Hani,” says one resident. “ I think if he dies in prison there will be a problem, the Afrikaaners might want to sue the state or blame the ANC for that,” adds the other resident.

“Just like Jackie Selebi was released on medical parole I think should he should be released so that he can teach others that a mistake is a mistake he must be forgiven,” says the third resident. Derby-Lewis must tell the truth: SACP:Wednesday 28 January 2015. SACP says Clive Derby-Lewis’ family are using his health to secure him parole. 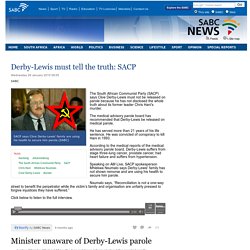 (SABC) The South African Communist Party (SACP) says Clive Derby-Lewis must not be released on parole because he has not disclosed the whole truth about its former leader Chris Hani's murder. The medical advisory parole board has recommended that Derby-Lewis be released on medical parole. He has served more than 21 years of his life sentence. He was convicted of conspiracy to kill Hani in 1993. According to the medical reports of the medical advisory parole board, Derby-Lewis suffers from stage three-lung cancer, prostate cancer, had heart failure and suffers from hypertension. Speaking on AM Live, SACP spokesperson Mhlekwa Nxumalo says Derby-Lewis' family has not shown remorse and are using his health to secure him parole. Nxumalo says, “Reconciliation is not a one-way street to benefit the perpetrator while the victim’s family and organisation are unfairly pressed to forgive injustices they have suffered.”

Political parties react to parole announcement:Friday 30 January 2015. Justice and Correctional Services Minister Michael Masutha made the announcement on the parole of three apartheid-era criminals on Friday. 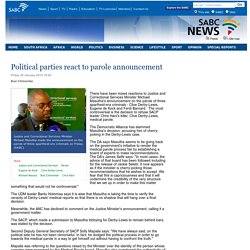 (SABC) There have been mixed reactions to Justice and Correctional Services Minister Michael Masutha's announcement on the parole of three apartheid-era criminals - Clive Derby-Lewis, Eugene de Kock and Ferdi Barnard. The most controversial is the decision to refuse SACP leader Chris Hani's killer, Clive Derby-Lewis, medical parole. The Democratic Alliance has slammed Masutha's decision, accusing him of cherry-picking in the Derby-Lewis case.

The DA says Masutha seems to be going back on the government's initiative to render the medical parole process fair by establishing a board of experts to make recommendations. The UDM leader Bantu Holomisa says it is wise that Masutha is taking the time to verify the veracity of Derby-Lewis' medical reports so that there is no shadow that will hang over a final decision.