Making alcohol easily available to underage people is one of the problems that taverns present. 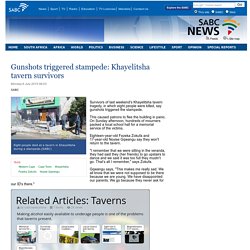 (SABC) Survivors of last weekend's Khayelitsha tavern tragedy, in which eight people were killed, say gunshots triggered the stampede. This caused patrons to flee the building in panic. On Sunday afternoon, hundreds of mourners packed a local school hall for a memorial service of the victims. Eighteen-year-old Fezeka Zokufa and 17-year-old Noyise Gqwangu say they won't return to the tavern. "I remember that we were sitting in the veranda, they had said they (her friends) to go upstairs to dance and we said it was too full they mustn't go.

Gqwangu says, "This makes me really sad. Related Articles: Taverns, by sabcnewsonline. Memorial service for Khayelitsha tavern victims :Sunday 5 July 2015. Six young women were killed during the early hours of Sunday morning in a stampede at Osi's tavern when a structure collapsed. 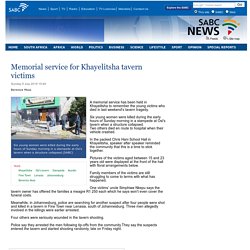 (SABC) A memorial service has been held in Khayelitsha to remember the young victims who died in last weekend's tavern tragedy. Six young women were killed during the early hours of Sunday morning in a stampede at Osi's tavern when a structure collapsed. Two others died en route to hospital when their vehicle crashed. In the packed Chris Hani School Hall in Khayelitsha, speaker after speaker reminded the community that this is a time to stick together. Pictures of the victims aged between 15 and 23 years old were displayed at the front of the hall with floral arrangements below. Family members of the victims are still struggling to come to terms with what has happened. One victims’ uncle Simphiwe Nkepu says the tavern owner has offered the families a meagre R1 250 each which he says won't even cover the funeral costs.

Tavern could lose its licence after stampede:Tuesday 30 June 2015. Eight women died in a tavern in a Khayelitsha tavern on Sunday. 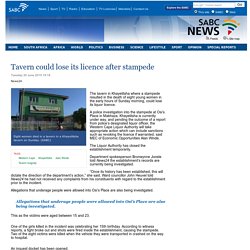 (SABC) The tavern in Khayelitsha where a stampede resulted in the death of eight young women in the early hours of Sunday morning, could lose its liquor licence. A police investigation into the stampede at Osi’s Place in Makhaza, Khayelitsha is currently under way, and pending the outcome of a report from police’s designated liquor officer, the Western Cape Liquor Authority will take appropriate action which can include sanctions such as revoking the licence if warranted, said MEC of Economic Opportunities Alan Winde.

The Liquor Authority has closed the establishment temporarily. Department spokesperson Bronwynne Jooste told News24 the establishment’s records are currently being investigated. “Once its history has been established, this will dictate the direction of the department’s action,” she said. Allegations that underage people were allowed into Osi’s Place are also being investigated. Victims discharged after tavern collapse in Khayelitsha:Monday 29 June 2015. An inquest docket has been opened into the deaths at the tavern. 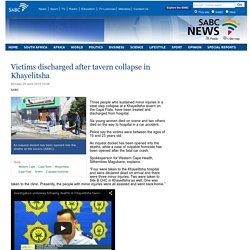 (SABC) Three people who sustained minor injuries in a steel step collapse at a Khayelitsha tavern on the Cape Flats, have been treated and discharged from hospital. Six young women died on scene and two others died on the way to hospital in a car accident. Police say the victims were between the ages of 15 and 23 years old. An inquest docket has been opened into the deaths, while a case of culpable homicide has been opened after the fatal car crash. Spokesperson for Western Cape Health, Sithembiso Magubane, explains. “Four were taken to the Khayelitsha hospital and were declared dead on arrival and there were three minor injuries. 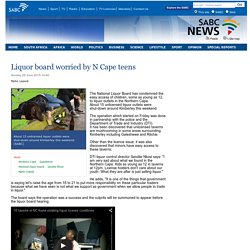 (SABC) The National Liquor Board has condemned the easy access of children, some as young as 12, to liquor outlets in the Northern Cape. About 15 unlicensed liquor outlets were shut-down around Kimberley this weekend. The operation which started on Friday was done in partnership with the police and the Department of Trade and Industry (DTI). It has been discovered that unlicensed taverns are mushrooming in some areas surrounding Kimberley including Galeshewe and Ritchie. Other than the licence issue, it was also discovered that minors have easy access to these taverns. 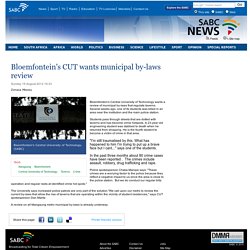 (SABC) Bloemfontein's Central University of Technology wants a review of municipal by-laws that regulate taverns. Several weeks ago, one of its students was killed in an area near the institution and the main police station. Students pass through streets that are dotted with taverns and has become crime hotspots. A 23-year old engineering student was stabbed to death when he returned from shopping. "I'm still traumatised by this. In the past three months about 80 crime cases have been reported .

Police spokesperson Chaka Marope says: "These crimes are a worrying factor to the police because they reflect a negative impact to us since the area is close to the police station. The University says increased police patrols are only part of the solution. " A review on all Mangaung metro municipal by-laws is already underway. Bloemfontein police conduct raids on drug hotspots :Sunday 10 February 2013. Bloemfontein police have closed taverns near student accommodation. 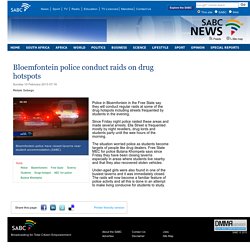 (SABC) Police in Bloemfontein in the Free State say they will conduct regular raids at some of the drug hotspots including streets frequented by students in the evening. Since Friday night police raided these areas and made several arrests. Ella Street is frequented mostly by night revellers, drug lords and students party until the wee hours of the morning. The situation worried police as students become targets of people like drug dealers.

Under-aged girls were also found in one of the busiest taverns and it was immediately closed.