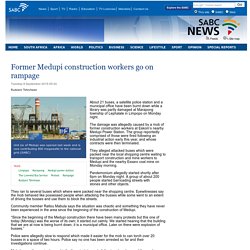 (SABC) About 21 buses, a satellite police station and a municipal office have been burnt down while a library was partly damaged at Marapong township of Lephalale in Limpopo on Monday night. The damage was allegedly caused by a mob of former construction workers at Eskom’s nearby Medupi Power Station. The group reportedly comprised of those were fired following an industrial action early this year, and whose contracts were then terminated. They alleged attacked buses which were packed near the local shopping centre waiting to transport construction and mine workers to Medupi and the nearby Exxaro coal mine on Monday morning.

Pandemonium allegedly started shortly after 6pm on Monday night. They ran to several buses which where were packed near the shopping centre. Police were allegedly slow to respond which made it easier for the mob to can torch over 20 busses in a space of two hours. Medupi unit six producing power: Eskom:Monday 2 March 2015. Medupi Power Station’s five other units will be synchronised in the coming three months. 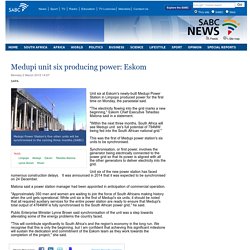 (SABC) Unit six at Eskom's newly-built Medupi Power Station in Limpopo produced power for the first time on Monday, the parastatal said. "The electricity flowing into the grid marks a new beginning," Eskom Chief Executive Tshediso Matona said in a statement. "Within the next three months, South Africa will see Medupi unit six's full potential of 794MW being fed into the South African national grid. " South Africans reminded to use power wisely:Friday 28 August 2015. The operation of electricity units in Medupi will help in reducing load shedding. 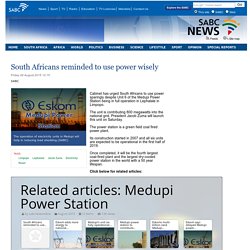 (SABC) Cabinet has urged South Africans to use power sparingly despite Unit 6 of the Medupi Power Station being in full operation in Lephalale in Limpopo. The unit is contributing 800 megawatts into the national grid. President Jacob Zuma will launch this unit on Saturday. The power station is a green field coal fired power plant.

Its construction started in 2007 and all six units are expected to be operational in the first half of 2019. Once completed, it will be the fourth largest coal-fired plant and the largest dry-cooled power station in the world with a 50 year lifespan. Click below for related articles: Eskom adds more energy to national grid:Sunday 23 August 2015. The construction of five more units at Medupi is expected to be completed in 2020. 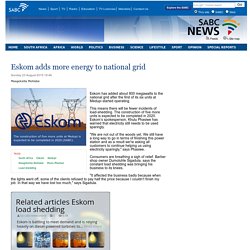 (SABC) Eskom has added about 800 megawatts to the national grid after the first of its six units at Medupi started operating. This means there will be fewer incidents of load-shedding. The construction of five more units is expected to be completed in 2020. Eskom’s spokesperson, Khulu Phasiwe has warned that electricity still needs to be used sparingly. "We are not out of the woods yet. Consumers are breathing a sigh of relief. "It affected the business badly because when the lights went off, some of the clients refused to pay half the price because I couldn't finish my job. 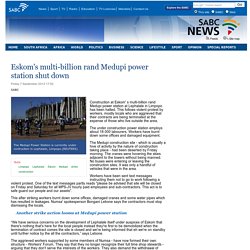 (REUTERS) Construction at Eskom' s multi-billion rand Medupi power station at Lephalale in Limpopo has been halted. This follows violent protest by workers, mostly locals who are aggrieved that their contracts are being terminated at the expense of those who live outside the area. The under construction power station employs about 18 000 labourers. Workers have burnt down some offices and damaged equipment. The Medupi construction site - which is usually a hive of activity by the nature of construction taking place - had been deserted by Friday morning. Workers have been sent text messages instructing them not to go to work following a violent protest. This after striking workers burnt down some offices, damaged cranes and some water pipes which has resulted in leakages. Eskom says delayed Medupi power plant to start on Dec 24:Sunday 14 September 2014. No load shedding as Eskom switches on Medupi unit :Friday 6 March 2015.

Eskom says the new unit will assist to minimize the risk of load shedding. 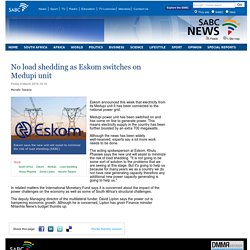 (SABC) Eskom announced this week that electricity from its Medupi unit 6 has been connected to the national power grid. Medupi power unit has been switched on and has come on line to generate power. This means electricity supply in the country has been further boosted by an extra 700 megawatts. Although the news has been widely well-received, experts say a lot more work needs to be done. The acting spokesperson at Eskom, Khulu Phasiwe says the new unit will assist to minimize the risk of load shedding. In related matters the International Monetary Fund says it is concerned about the impact of the power challenges on the economy as well as some of South Africa's structural challenges. The deputy Managing director of the multilateral funder, David Lipton says the power cut is hampering economic growth. Medupi workers down tools again:Thursday 14 March 2013. 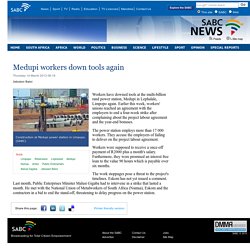 (SABC) Workers have downed tools at the multi-billion rand power station, Medupi in Lephalale, Limpopo again. Earlier this week, workers' unions reached an agreement with the employers to end a four-week strike after complaining about the project labour agreement and the year-end bonuses. The power station employs more than 17 000 workers. They accuse the employers of failing to deliver on the project labour agreement. Workers were supposed to receive a once-off payment of R2000 plus a month's salary. Medupi workers ready to go back to work: Numsa:Thursday 26 March 2015. Eskom expects everything to be back to normal on Friday. 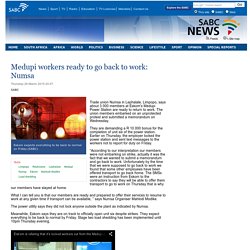 (SABC) Trade union Numsa in Lephalale, Limpopo, says about 3 000 members at Eskom's Medupi Power Station are ready to return to work. The union members embarked on an unprotected protest and submitted a memorandum on Wednesday. They are demanding a R 10 000 bonus for the completion of unit six of the power station. Earlier on Thursday, the employer locked the power station and sent text messages to the workers not to report for duty on Friday. “According to our interpretation our members were not embarking on strike, actually it was the fact that we wanted to submit a memorandum and go back to work. What I can tell you is that our members are ready and prepared to offer their services to resume to work at any given time if transport can be available, ” says Numsa Organiser Mahlodi Modike. The power utility says they did not lock anyone outside the plant as indicated by Numsa. 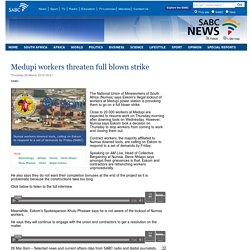 (SABC) The National Union of Mineworkers of South Africa (Numsa) says Eskom’s illegal lockout of workers at Medupi power station is provoking them to go on a full blown strike. Over 1000 Medupi workers fired:Saturday 28 March 2015. Unit six at the Medupi power station in Lephalale, Limpopo went live this year. 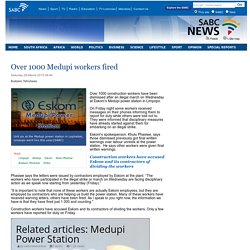 (SABC) Over 1000 construction workers have been dismissed after an illegal march on Wednesday at Eskom's Medupi power station in Limpopo. On Friday night some workers received messages on their phones informing them to report for duty while others were told not to. They were informed that disciplinary measures have already started against them for embarking on an illegal strike. 3 000 Medupi workers strike in sympathy for fired workers:Friday 10 April 2015.