Eskom says load shedding remains stable :Friday 7 August 2015. The power utility says, as a result of increased electricity demand in the evening and power generating units being on maintenance, the power system is expected to be constrained. 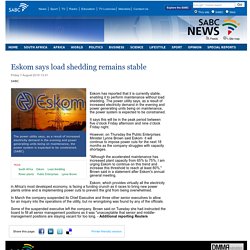 (SABC) Eskom has reported that it is currently stable, enabling it to perform maintenance without load shedding. The power utility says, as a result of increased electricity demand in the evening and power generating units being on maintenance, the power system is expected to be constrained. It says this will be in the peak period between five o'clock Friday afternoon and nine o'clock Friday night. However, on Thursday the Public Enterprises Minister Lynne Brown said Eskom it will continue to impose power cuts for the next 18 months as the company struggles with capacity shortages.

Eskom, which provides virtually all the electricity in Africa's most developed economy, is facing a funding crunch as it races to bring new power plants online and is implementing power cuts to prevent the grid from being overwhelmed. Load limiting to reduce load shedding: City Power:Tuesday 21 July 2015. City Power started load limiting on Monday. 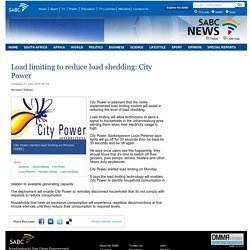 (SABC) City Power is adamant that the newly implemented load limiting system will assist in reducing the level of load shedding. Load limiting will allow technicians to send a signal to households in the Johannesburg area alerting them when their electricity usage is high. City Power Spokesperson Louis Pieterse says lights will go off for 30 seconds then be back for 30 seconds and be off again. He says once users see this happening, they should know that it's time to switch off their geysers, pool pumps, stoves, heaters and other heavy duty appliances. Eskom implements Stage 1 load shedding:Sunday 21 June 2015. Motsoaledi angered by patients’ death due to load shedding:Friday 19 June 2015. Health Minister Dr Aaron Motsoaledi has urged hospitals across the country to stock fuel because they won’t be exempted from loadshedding. 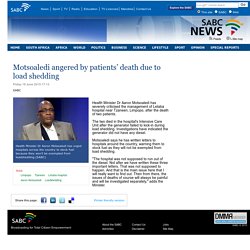 (SABC) Health Minister Dr Aaron Motsoaledi has severely criticised the management of Letaba hospital near Tzaneen, Limpopo, after the death of two patients. The two died in the hospital's Intensive Care Unit after the generator failed to kick-in during load shedding. Investigations have indicated the generator did not have any diesel. Economist highlights impact of load shedding:Sunday 2 November 2014. Heavy industries and small businesses are expected to be the hardest hit. 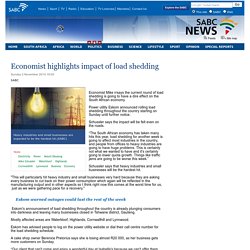 (SABC) Economist Mike rrsays the current round of load shedding is going to have a dire effect on the South African economy. Power utility Eskom announced rolling load shedding throughout the country starting on Sunday until further notice. Schussler says the impact will be felt even on the roads. Eskom implements stage three load-shedding:Thursday 5 February 2015. Eskom has switched from stage two load-shedding to stage three. 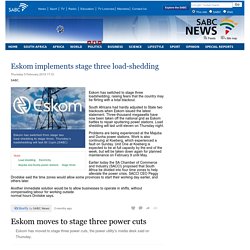 Thursday's loadshedding will last till 11pm. (SABC) Eskom has switched to stage three loadshedding, raising fears that the country may be flirting with a total blackout. South Africans had hardly adjusted to State two blackouts when Eskom issued the latest statement. Three-thousand megawatts have now been taken off the national grid as Eskom battles to repair sputtering power stations. Problems are being experienced at the Majuba and Duvha power stations. Earlier today the SA Chamber of Commerce and Industry (SACCI) proposed that South Africa be divided into four time zones to help alleviate the power crisis.

Another immediate solution would be to allow businesses to operate in shifts, without compensating labour for working outside normal hours Drotskie says. Eskom implements stage two load shedding:Saturday 7 February 2015. Eskom has urged South Africans to use electricity sparingly. 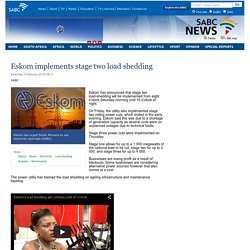 (SABC) Eskom has announced that stage two load-shedding will be implemented from eight o'clock Saturday morning until 10 o'clock at night. On Friday, the utility also implemented stage two rolling power cuts, which ended in the early evening. ‘Our businesses will fold if the lights go out’:Monday 13 April 2015. Eskom announced plans to cut off electricity supply to 20 defaulting municipalities nationwide over their R3.68 billion debt. 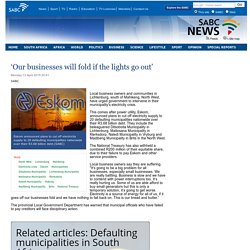 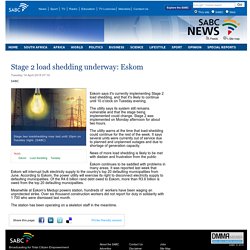 (SABC) Eskom says it's currently implementing Stage 2 load shedding, and that it's likely to continue until 10 o'clock on Tuesday evening. The utility says its system still remains vulnerable and that the stage being implemented could change. Stage 2 was implemented on Monday afternoon for about two hours. The utility warns at the time that load-shedding could continue for the rest of the week.