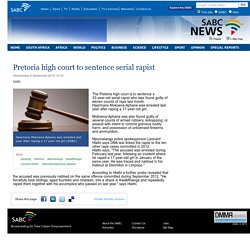 (SABC) The Pretoria high court is to sentence a 33-year-old serial rapist who was found guilty of eleven counts of rape last month. Haarmans Mokoena-Aphane was arrested last year after raping a 17-year-old girl. Mokoena-Aphane was also found guilty of several counts of armed robbery, kidnapping, or assault with intent to commit grievous bodily harm, and possession of unlicensed firearms and ammunition. Mpumalanga police spokesperson Leonard Hlathi says DNA test linked the rapist to the ten other rape cases committed in 2012.

According to Hlathi a further probe revealed that the accused was previously nabbed on the same offence committed during September 2012. Serial rapist appears in Durban Magistrates Court :Wednesday 12 August 2015. The man will remain in custody until his next appearance on the 20th of August 2015. 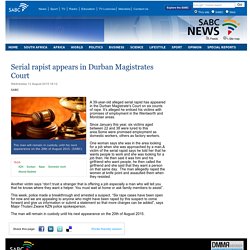 (SABC) A 39-year-old alleged serial rapist has appeared in the Durban Magistrate's Court on six counts of rape. It’s alleged he enticed his victims with promises of employment in the Wentworth and Montclair areas. Since January this year, six victims aged between 22 and 38 were lured to this area.Some were promised employment as domestic workers, others as factory workers. One woman says she was in the area looking for a job when she was approached by a man.A victim of the serial rapist says he told her that he wants people to work and she was looking for a job then. Another victim says “don’t trust a stranger that is offering a job especially a man who will tell you that he knows where they want a helper.

This week, police made a breakthrough and arrested a suspect. The man will remain in custody until his next appearance on the 20th of August 2015. Serial rapist’s case postponed in KZN:Monday 22 June 2015. Sandile Xulu allegedly raped six women over a period of three months in the Empangeni area earlier this year. 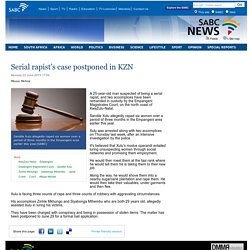 (SABC) A 25-year-old man suspected of being a serial rapist, and two accomplices have been remanded in custody by the Empangeni Magistrates Court, on the north coast of KwaZulu-Natal. Sandile Xulu allegedly raped six women over a period of three months in the Empangeni area earlier this year. Xulu was arrested along with two accomplices on Thursday last week, after an intensive investigation by the police. It's believed that Xulu's modus operandi entailed luring unsuspecting women through social networks and promising them employment. He would then meet them at the taxi rank where he would tell them he is taking them to their new job.

Along the way, he would shove them into a nearby sugarcane plantation and rape them. Judgement on alleged serial rapist continues on Monday:Sunday 18 January 2015. Albert Morake has so far been found guilty of 61 of the 175 charges against him. 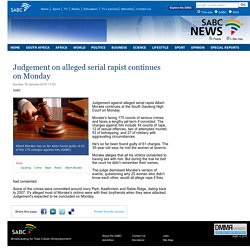 (SABC) Judgement against alleged serial rapist Albert Morake continues at the South Gauteng High Court on Monday. Morake's facing 175 counts of serious crimes and faces a lengthy jail term if convicted. The charges against him include 34 counts of rape, 12 of sexual offences, two of attempted murder, 53 of kidnapping, and 27 of robbery with aggravating circumstances. He's so far been found guilty of 61 charges. Morake alleges that all his victims consented to having sex with him. The judge dismissed Morake's version of events, questioning why 25 women who didn't know each other, would all allege rape if they had consented.

Some of the crimes were committed around Ivory Park, Kaalfontein and Rabie Ridge, dating back to 2007. Serial rapist gets 78 years in jail:Friday 20 February 2015. Judge Moses Mavundla in the Pretoria High Court on Friday sentenced Serial rapist, Simone Antonio Sithole to an effective 78 years imprisonment. 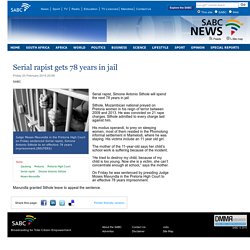 (REUTERS) Serial rapist, Simone Antonio Sithole will spend the next 78 years in jail. Sithole, Mozambican national preyed on Pretoria women in his reign of terror between 2009 and 2013. He was convicted on 21 rape charges. Sithole admitted to every charge laid against him. His modus operandi, to prey on sleeping women, most of them resided in the Phomolong informal settlement in Mamelodi, where he was staying. The mother of the 11-year-old says her child’s school work is suffering because of the incident. “He tried to destroy my child, because of my child is too young. On Friday he was sentenced by presiding Judge Moses Mavundla in the Pretoria High Court to an effective 78 years imprisonment. 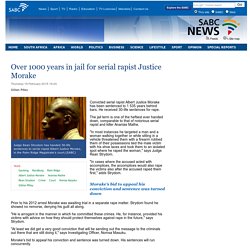 (SABC) Convicted serial rapist Albert Justice Morake has been sentenced to 1 535 years behind bars. He received 30-life sentences for rape. The jail term is one of the heftiest ever handed down, comparable to that of notorious serial rapist and killer Ananias Mathe. "In most instances he targeted a man and a woman walking together or while sitting in a vehicle threatened them with a firearm robbed them of their possessions tied the male victim with his shoe laces and took them to an isolated spot where he raped the woman," says Judge Rean Strydom.

"In cases where the accused acted with accomplices, the accomplices would also rape the victims also after the accused raped them first," adds Strydom. Morake's bid to appeal his conviction and sentence was turned down.