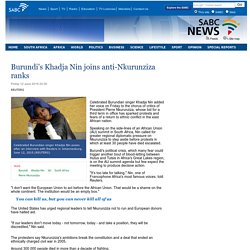 (REUTERS) Celebrated Burundian singer Khadja Nin added her voice on Friday to the chorus of critics of President Pierre Nkurunziza, whose bid for a third term in office has sparked protests and fears of a return to ethnic conflict in the east African nation. Speaking on the side-lines of an African Union (AU) summit in South Africa, Nin called for greater regional diplomatic pressure on Nkurunziza to step aside before protests in which at least 30 people have died escalated. Burundi's political crisis, which many fear could trigger another bout of blood-letting between Hutus and Tutsis in Africa's Great Lakes region, is on the AU summit agenda but few expect the meeting to produce decisive action. "It's too late for talking," Nin, one of Francophone Africa's most famous voices, told Reuters. Burundi tells diplomats to stay neutral over unrest:Tuesday 28 April 2015.

Two protesters have been killed and more than 250 people arrested since protests erupted on Sunday(REUTERS) Burundi’s government told diplomats on Tuesday to stay neutral and not side with protesters who accuse President Pierre Nkurunziza of violating the constitution by announcing he will seek a third term in office. 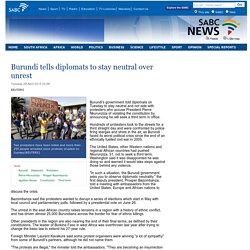 Hundreds of protesters took to the streets for a third straight day and were confronted by police firing teargas and shots in the air, as Burundi faced its worst political crisis since the end of an ethnically fuelled civil war in 2005. The United States, other Western nations and regional African countries had pushed Nkurunziza, 51, not to seek a third term. Washington said it was disappointed he was doing so and warned it would take steps against those behind any violence. Bazombanza said the protesters wanted to disrupt a series of elections which start in May with local council and parliamentary polls, followed by a presidential vote on June 26. Calls mount for an end to Burundi violence:Thursday 30 April 2015. Thousands have already fled across the border to Rwanda while the UN has warned that 400 000 people could be affected as violence erupts. 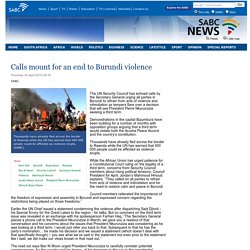 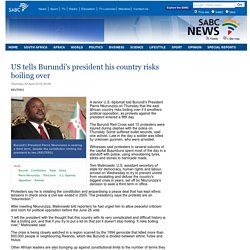 (REUTERS) A senior U.S. diplomat told Burundi's President Pierre Nkurunziza on Thursday that the east African country risks boiling over if it smothers political opposition, as protests against the president entered a fifth day. The Burundi Red Cross said 15 protesters were injured during clashes with the police on Thursday. Some suffered bullet wounds, said one activist. Late in the day a soldier was killed by unknown gunmen, who were arrested. Witnesses said protesters in several suburbs of the capital Bujumbura spent most of the day in a standoff with police, using smouldering tyres, sticks and stones to barricade roads. Burundi protesters call for a two-day pause in demonstrations:Saturday 2 May 2015. Burundis patchwork army faces test to keep the peace:Sunday 3 May 2015. President Pierre Nkurunziza, a former rebel leader and now the army's commander-in-chief wants to run for office again (SABC) When protesters in Burundi cheer for soldiers who turn up at demonstrations against the president's bid for a third term, it is redolent of uprisings further north in Africa where the military was hailed as friend not foe. 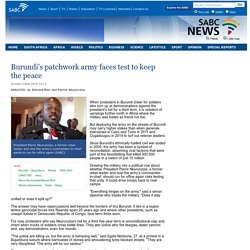 But deploying the army on the streets of Burundi may carry higher stakes than when generals intervened in Cairo and Tunis in 2011 and Ougadougou in 2014 to turf out veteran leaders. Since Burundi's ethnically fuelled civil war ended in 2005, the army has been a symbol of reconciliation, absorbing rival factions that were part of the bloodletting that killed 300 000 people in a nation of just 10 million.

Drawing the military into a political row about whether President Pierre Nkurunziza, a former rebel leader and now the army's commander-in-chief, should run for office again risks testing that unity. It could drive troops back to rival camps. UN greatly concerned over Burundi unrest :Tuesday 5 May 2015. As unrest mounts in Burundi, about 30 000 people have fled to Rwanda and three deaths have been reported. 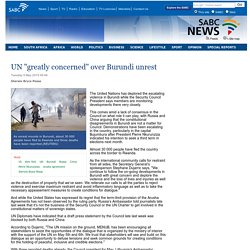 (REUTERS) The United Nations has deplored the escalating violence in Burundi while the Security Council President says members are monitoring developments there very closely. This comes amid a lack of consensus in the Council on what role it can play, with Russia and China arguing that the constitutional disagreements in Burundi are not a matter for Council. 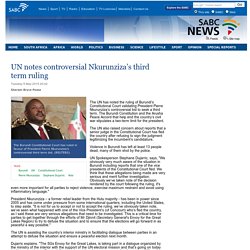 (REUTERS) The UN has noted the ruling of Burundi’s Constitutional Court validating President Pierre Nkurunziza’s controversial bid to seek a third term. The Burundi Constitution and the Arusha Peace Accord that help end the country’s civil war stipulates a two-term limit for the president. The UN also raised concern about reports that a senior judge in the Constitutional Court has fled the country after refusing to sign the judgment legitimizing the incumbent’s candidature. Violence in Burundi has left at least 13 people dead, many of them shot by the police. UN Spokesperson Stephane Dujarric, says, "We obviously very much aware of the situation in Burundi including reports that one of the vice presidents of the Constitutional Court fled. Dujarric explains. Zuma sends special envoy to volatile Burundi:Wednesday 6 May 2015. President Jacob Zuma has called for calm in Burundi following week-long deadly protests. 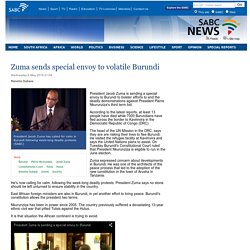 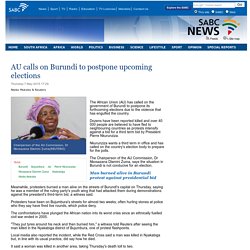 Dozens have been reported killed and over 40 000 people are believed to have fled to neighbouring countries as protests intensify against a bid for a third term bid by President Pierre Nkurunziza. AU wants Burundi to postpone elections:Thursday 7 May 2015. The Chairperson of the AU Commission, Dr Nkosazana Dlamini-Zuma(REUTERS) The African Union (AU) has called on the government of Burundi to postpone its forthcoming elections due to the violence that has engulfed that country. 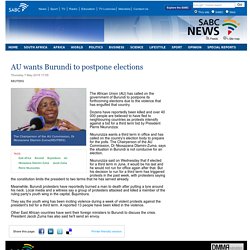 Dozens have reportedly been killed and over 40 000 people are believed to have fled to neighbouring countries as protests intensify against a bid for a third term bid by President Pierre Nkurunziza.