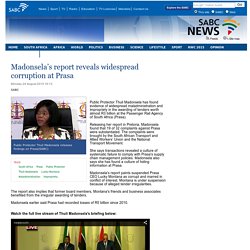 Releasing her report in Pretoria, Madonsela found that 19 of 32 complaints against Prasa were substantiated. The complaints were brought by the South African Transport and Allied Workers’ Union and the National Transport Movement. She says transactions revealed a culture of systematic failure to comply with Prasa's supply chain management policies.

Madonsela also says she has found a culture of hiding information at Prasa. Madonsela's report paints suspended Prasa CEO Lucky Montana as corrupt and marred in conflict of interest. Prasa confirms probe into fake qualifications:Thursday 3 September 2015. Prasa’s qualifications audit has been sparked by controversy surrounding former Head of Engineering Services, Daniel Mthimkhulu's qualifications(SABC) The Passenger Rail Agency of SA (Prasa) is to conduct an academic verification audit, according to Board Chair, Popo Molefe. 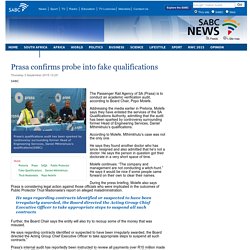 Addressing the media earlier in Pretoria, Molefe says they have enlisted the services of the SA Qualifications Authority, admitting that the audit has been sparked by controversy surrounding former Head of Engineering Services, Daniel Mthimkhulu's qualifications. According to Molefe, Mthimkhulu’s case was not the only one. New Prasa board shocked by trail of maladministration:Friday 4 September 2015. Popo Molefe says that Prasa has asked the National Treasury to second it with an experienced procurement officer. 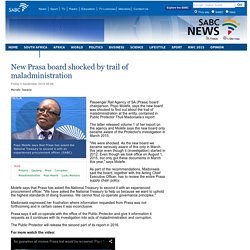 (SABC) Passenger Rail Agency of SA (Prasa) board chairperson, Popo Molefe, says the new board was shocked to find out about the trail of maladministration at the entity, contained in Public Protector Thuli Madonsela’s report. The latter released volume 1 of her report on the agency and Molefe says the new board only became aware of the Protector's investigation in March 2015. "We were shocked. As the new board we became seriously aware of this only in March this year even though it (investigation) started in 2012. Prasa told to tread carefully over irregular tenders :Friday 11 September 2015. Prasa briefed the Parliament committee on its implementation of the remedial action. 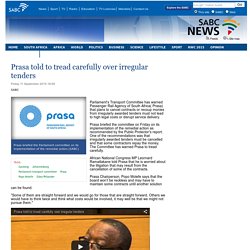 (SABC) Parliament's Transport Committee has warned Passenger Rail Agency of South Africa( Prasa) that plans to cancel contracts or recoup monies from irregularly awarded tenders must not lead to high legal costs or disrupt service delivery. Prasa briefed the committee on Friday on its implementation of the remedial action as recommended by the Public Protector's report. One of the recommendations was that irregularly awarded tenders must be cancelled and that some contractors repay the money. Cable theft is an economic crime: Prasa :Thursday 15 October 2015. Prasa wants the Transport Department to review its funding model. 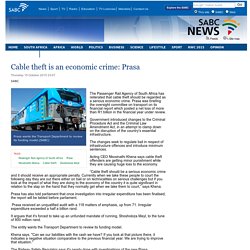 (SABC) The Passenger Rail Agency of South Africa has reiterated that cable theft should be regarded as a serious economic crime. Prasa was briefing the oversight committee on transport on its financial report which posted a net loss of more than R1 billion in the financial year under review. Government introduced changes to the Criminal Procedure Act and the Criminal Law Amendment Act, in an attempt to clamp down on the disruption of the country's essential infrastructure. The changes seek to regulate bail in respect of infrastructure offences and introduce minimum sentences. Acting CEO Nkosinathi Khena says cable theft offenders are getting minor punishment while they are causing huge loss to the economy.

“Cable theft should be a serious economic crime and it should receive an appropriate penalty. Prasa received an unqualified audit with a 118 matters of emphasis, up from 71. Prasa tender in jeopardy:Sunday 10 May 2015. Prasa CEO Lucky Montana has admitted that his state-owned company had concerns about Alstom's ability to keep to the contract's local content requirements. 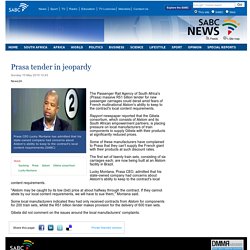 (SABC) The Passenger Rail Agency of South Africa's (Prasa) massive R51 billion tender for new passenger carriages could derail amid fears of French multinational Alstom's ability to keep to the contract's local content requirements. Rapport newspaper reported that the Gibela consortium, which consists of Alstom and its South African empowerment partners, is placing pressure on local manufacturers of train components to supply Gibela with their products at significantly reduced prices.

Some of these manufacturers have complained to Prasa that they can't supply the French giant with their products at such discount rates. The first set of twenty train sets, consisting of six carriages each, are now being built at an Alstom facility in Brazil. "Alstom may be caught by its low (bid) price at about halfway through the contract. Prasa cables to be overhauled :Tuesday 14 July 2015. Prasa CEO Lucky Montana took the media on a ride on the locomotives in question. 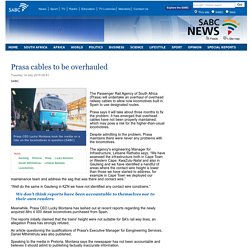 (SABC) The Passenger Rail Agency of South Africa (Prasa) will undertake an overhaul of overhead railway cables to allow now locomotives built in Spain to use designated routes. Prasa says it will take about three months to fix the problem. It has emerged that overhead cables have not been properly maintained, which may pose a risk for the higher-than-usual locomotives. Despite admitting to the problem, Prasa maintains there were never any problems with the locomotives. The agency's engineering Manager for Infrastructure, Letsane Rathaba says, “We have assessed the infrastructure both in Cape Town or Western Cape, KwaZulu-Natal and also in Gauteng and we have identified a handful of areas where the contact wire height is lower than those we have started to address, for example in Cape Town we deployed our maintenance team and address the sag that was there and contact wire.”

My departure from Prasa is no surprise: Montana:Thursday 16 July 2015. Outgoing Prasa CEO Lucky Montana says he will hold a media briefing to set the record straight. 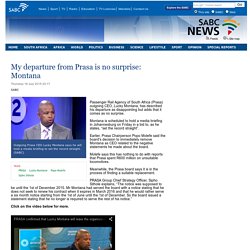 (SABC) Passenger Rail Agency of South Africa (Prasa) outgoing CEO, Lucky Montana, has described his departure as disappointing but adds that it comes as no surprise. Montana is scheduled to hold a media briefing in Johannesburg on Friday in a bid to, as he states, “set the record straight”. Numsa slams Prasa CEO sacking :Friday 17 July 2015. Passenger Rail Agency of South Africa outgoing CEO, Lucky Montana. 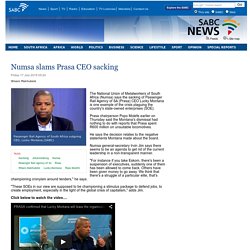