Operation Fiela not meant to target foreigners: State:Friday 26 June 2015. Government says through Operation Fiela, they are reclaiming communities so that people can live in peace and harmony. 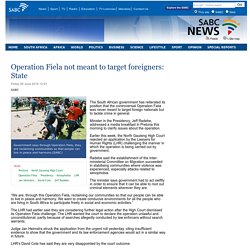 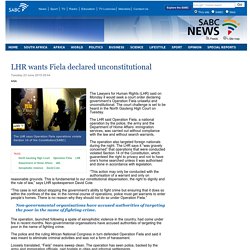 The court challenge is set to be heard in the North Gauteng High Court on Tuesday. The LHR said Operation Fiela, a national operation by the police, the army and the Department of Home Affairs’ immigration services, was carried out without compliance with the law and without search warrants. The operation also targeted foreign nationals during the night. The LHR says it “was gravely concerned” that operations that were conducted violated Section 14 of the Constitution, which guaranteed the right to privacy and not to have one’s home searched unless it was authorised and done in accordance with legislation. “This action may only be conducted with the authorisation of a warrant and only on reasonable grounds.

Loosely translated, “Fiela” means sweep clean. ‘Operation Fiela can be used differently’:Tuesday 26 May 2015. The former president has also called for an end to racial and border discrimination in Africa. 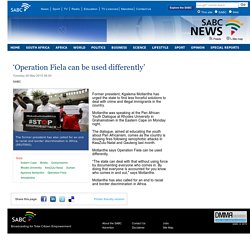 (REUTERS) Former president, Kgalema Motlanthe has urged the state to find less forceful solutions to deal with crime and illegal immigrants in the country. Motlanthe was speaking at the Pan African Youth Dialogue at Rhodes University in Grahamstown in the Eastern Cape on Monday night. The dialogue, aimed at educating the youth about Pan Africanism, comes as the country is dousing fires following xenophobic attacks in KwaZulu-Natal and Gauteng last month. Motlanthe says Operation Fiela can be used differently. “The state can deal with that without using force by documenting everyone who comes in. Motlanthe has also called for an end to racial and border discrimination in Africa. 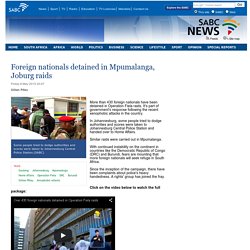 Operation Fiela yields positive results in Kagiso :Saturday 23 May 2015. At least 10 people have been arrested for various crimes. 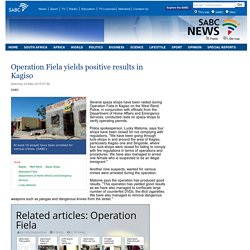 (SABC) Several spaza shops have been raided during Operation Fiela in Kagiso on the West Rand. Police, in conjunction with officials from the Department of Home Affairs and Emergency Services, conducted raids on spaza shops to verify operating permits. Police spokesperson, Lucky Matome, says four shops have been closed for not complying with regulations. "We have been going through tuck-shops in and around the area of Kagiso, particularly Kagiso one and Singobile, where four tuck-shops were closed for failing to comply with fire regulations in terms of operations and procedures. Another nine suspects, wanted for various crimes were arrested during the operation. Operation Fiela should be scrapped: Activists:Monday 18 May 2015. Human Rights activists are calling for an end to Operation Fiela because they say it targets foreign nationals. 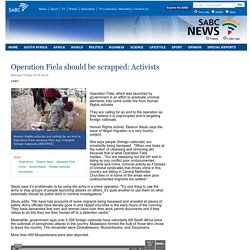 (REUTERS) Operation Fiela, which was launched by government in an effort to eradicate criminal elements, has come under fire from Human Rights activists. They are calling for an end to the operation as they believe it is unprincipled and is targeting foreign nationals. Human Rights activist, Eleanor Sisulu says the issue of illegal migration is a very touchy subject. She says people (foreign nationals) are constantly being harassed.

Sisulu says it’s problematic to be using the army in a crime operation. Sisulu adds: "We have had accounts of some migrants being harassed and arrested at places of safety. Meanwhile, government says over 5 000 foreign nationals have voluntarily left South Africa since the outbreak of xenophobic attacks in the country. More than 400 Mozambicans were also deported. Related articles: Xenophobic attacks, by sabcnewsonline. Government to intensify Operation Fiela:Sunday 17 May 2015. Minister Jeff Radebe says 'Operation Fiela' will rid townships of crime. 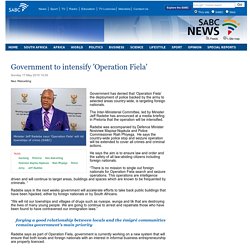 (SABC) Government has denied that ‘Operation Fiela’ the deployment of police backed by the army to selected areas country-wide, is targeting foreign nationals. The Inter-Ministerial Committee, led by Minister Jeff Radebe has announced at a media briefing in Pretoria that the operation will be intensified. Radebe was accompanied by Defence Minister Nosiviwe Mapisa-Nqakula and Police Commissioner Riah Phiyega. He says the country-wide police stop and seizure operation will be extended to cover all crimes and criminal actions. He says the aim is to ensure law and order and the safety of all law-abiding citizens including foreign nationals. “There is no mission to single out foreign nationals for Operation Fiela search and seizure operations. Radebe says in the next weeks government will accelerate efforts to take back public buildings that have been hijacked, either by foreign nationals or by South Africans. Operation Fiela to root out criminal elements :Tuesday 28 April 2015.

Nigeria has been vocal in condemning the attacks - and its row with South Africa has caught the attention of many. 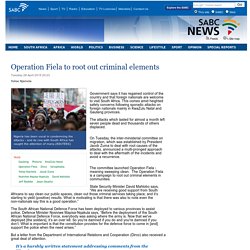 (REUTERS) Government says it has regained control of the country and that foreign nationals are welcome to visit South Africa. This comes amid heighted safety concerns following sporadic attacks on foreign nationals mainly in KwaZulu Natal and Gauteng provinces. The attacks which lasted for almost a month left seven people dead and thousands of others displaced. On Tuesday, the inter-ministerial committee on migration, which was established by President Jacob Zuma to deal with root causes of the attacks, announced a multi-pronged approach to deal with the aftermath of the incidents and avoid a recurrence.