The cost of security upgrades to Nkandla, President Zuma's private home, continued to be a thorny issue in the national dialogue, sparking public debate and heated confrontations in Parliament. 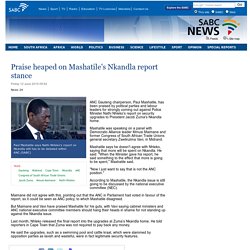 He said: "When the Minister gave his report, he said something to the effect that more is going to be spent," Mashatile said. "Now I just want to say that is not the ANC position. " Nhleko defends Nkandla fire pool... again!:Tuesday 21 July 2015. Nkandla site visit a waste of time: EFF:Monday 13 July 2015. FF Plus laments Nkandla media ban:Sunday 12 July 2015. The Ad Hoc Committee was set-up to consider the report o n Nkandla by the Minister of Police, Nathi Nhleko, and will visit Nkabdla in July. 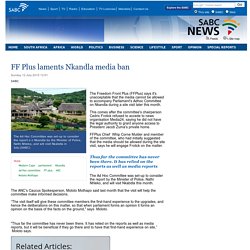 (SABC) The Freedom Front Plus (FFPlus) says it's unacceptable that the media cannot be allowed to accompany Parliament's Adhoc Committee on Nkandla during a site visit later this month. This comes after the committee's chairperson Cedric Frolick refused to accede to news organisation Media24, saying he did not have the legal authority to grant anyone access to President Jacob Zuma's private home. FFPlus Chief Whip Corne Mulder and member of the committee, who had initially suggested that the media should be allowed during the site visit, says he will engage Frolick on the matter. 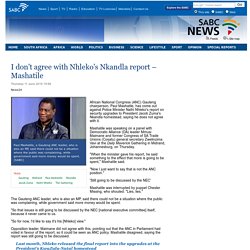 (SABC) African National Congress (ANC) Gauteng chairperson, Paul Mashatile, has come out against Police Minister Nathi Nhleko's report on security upgrades to President Jacob Zuma's Nkandla homestead, saying he does not agree with it. Mashatile was speaking on a panel with Democratic Alliance (DA) leader Mmusi Maimane and former Congress of SA Trade Unions (Cosatu) general secretary Zwelinzima Vavi at the Daily Maverick Gathering in Midrand, Johannesburg, on Thursday. "When the minister gave his report, he said something to the effect that more is going to be spent," Mashatile said. "Now I just want to say that is not the ANC position. " SABC News - Nkandla saga must go to Constitutional Court: Madonsela:Monday 1 June 2015. Public Protector Thuli Madonsela plans to write to President Zuma about Nkandla. 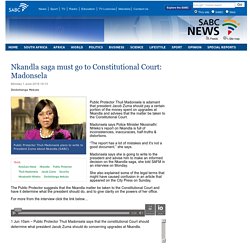 (SABC) Public Protector Thuli Madonsela is adamant that president Jacob Zuma should pay a certain portion of the money spent on upgrades at Nkandla and advises that the matter be taken to the Constitutional Court. Madonsela says Police Minister Nkosinathi Nhleko’s report on Nkandla is full of inconsistencies, inaccuracies, half-truths & distortions. “The report has a lot of mistakes and it’s not a good document.” she says.

NW ANC in favour of Nhleko report on Nkandla:Saturday 6 June 2015. North West ANC says the country needs to move on from the Nkandla issue. 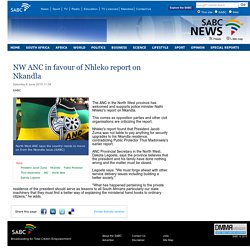 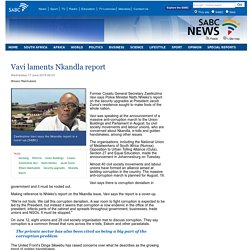 (SABC) Former Cosatu General Secretary Zwelinzima Vavi says Police Minister Nathi Nhleko's report on the security upgrades at President Jacob Zuma's residence sought to make fools of the whole nation. Vavi was speaking at the announcement of a massive anti-corruption march to the Union Buildings and Parliament in August, by civil society movements and labour unions, who are concerned about Nkandla, e-tolls and golden handshakes, among other issues. The organisations, including the National Union of Metalworkers of South Africa (Numsa), Opposition to Urban Tolling Alliance (Outa), Section 27 and Equal Education, made the announcement in Johannesburg on Tuesday. Almost 40 civil society movements and labour unions have formed an alliance aimed at tackling corruption in the country. Vavi says there is corruption denialism in government and it must be rooted out. "We're not fools. Zuma’s response to Nkandla report will divide nation: Analyst:Thursday 3 April 2014. 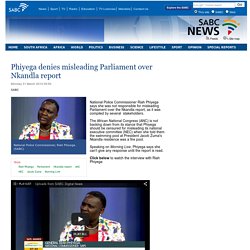 (SABC) National Police Commissioner Riah Phiyega says she was not responsible for misleading Parliament over the Nkandla report, as it was compiled by several stakeholders. The African National Congress (ANC) is not backing down from its stance that Phiyega should be censured for misleading its national executive committee (NEC) when she told them the swimming pool at President Jacob Zuma's Nkandla residence was a fire pool. Speaking on Morning Live, Phiyega says she can't give any response until the report is read. Click below to watch the interview with Riah Phiyega. Architect faces civil claim on work done in Nkandla :Tuesday 12 August 2014. According to court documents, architect Minenhle Makhanya and the Department of Public Works have 20 days to dispute the claim and to defend the action. 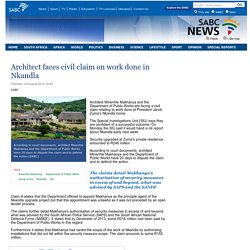 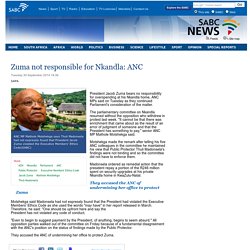 The parliamentary committee on Nkandla resumed without the opposition who withdrew in protest last week. "It cannot be that there was enrichment that came about as the result of an error of judgment of someone and that the President has something to pay," senior ANC MP Mathole Motshekga said. Motshekga made the remark after telling his five ANC colleagues in the committee he maintained his view that Public Protector Thuli Madonsela's findings were not binding and so the committee did not have to enforce them. Government officials face a disciplinary hearing over Nkandla upgrades:Monday 29 September 2014. President Jacob Zuma's home in Nkandla. 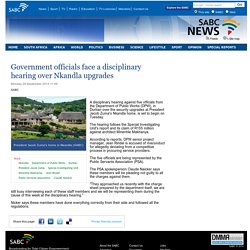 (SABC) A disciplinary hearing against five officials from the Department of Public Works (DPW), in Durban over the security upgrades at President Jacob Zuma's Nkandla home, is set to begin on Tuesday. The hearing follows the Special Investigating Unit's report and its claim of R155 million against architect Minenhle Makhanya. According to reports, DPW senior project manager, Jean Rindel is accused of misconduct for allegedly deviating from a competitive process in procuring service providers. Zuma has responded to all Nkandla reports: Presidency:Saturday 16 August 2014.

Nkandla ad-hoc committee clears Zuma of any wrongdoing :Friday 31 October 2014. The committee says a number of senior government officials and not the President should answer for the expenditure at the Nkandla residence. (SABC) After a long and difficult two months, Parliament's Ad hoc Committee on Nkandla has cleared President Jacob Zuma of any wrongdoing. The committee comprising of African National Congress (ANC) members, with no members from opposition parties, met till late Thursday night to consider the first draft of its report to the National Assembly.

It's instead blamed government officials for their gross negligence in the execution of their duties. The committee says a number of senior government officials and not the President should answer for the expenditure that amounts to R 246 million on his private home. ANC Member of Parliament Mamoloko Kubayi says there was flouting of duty by the accounting officers of the relevant departments.

DA seeks to ensure Zuma pays Nkandla money:Sunday 2 November 2014. DA Parliamentary Leader Mmusi Maimane. (SABC) DA Parliamentary Leader Mmusi Maimane says his party is already in the process of seeking legal advice on how to make President Jacob Zuma pay a portion of money spent on non-security upgrades at his private residence, as recommended by the Public Protector. Maimane says this will be the next step if the report compiled by opposition parties into Nkandla is rejected in the National Assembly this week.

Maimane led a united opposition walk out of the Nkandla Adhoc Committee after the DA, EFF, COPE, FF-Plus and the IFP wanted the Public Protector's report to supersede all other reports into the security upgrades. Maimane says his party will do whatever it takes to ensure that President Zuma pays his portion of those non-security upgrades. “The opposition will table the report and subsequent to that report, we will then take the matter forward in terms of how do we ensure that Parliament exhausts all of its actions. Political parties insist on ad hoc committee into Nkandla saga:Friday 15 August 2014. EFF disrupt Zumas response on Nkandla:Thursday 21 August 2014.