Gold producers, unions wrangle over welfare pact:Thursday 18 June 2015. The National Union of Mineworkers (NUM) said it would not back down on its wage targets. 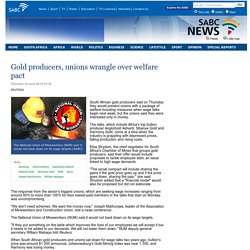 (SABC) South African gold producers said on Thursday they would present unions with a package of welfare-boosting measures when wage talks begin next week, but the unions said they were interested only in money. The talks, which include Africa's top bullion producer AngloGold Ashanti, Sibanye Gold and Harmony Gold, come at a time when the industry is grappling with depressed prices, falling production and rising costs. Elize Strydom, the chief negotiator for South Africa's Chamber of Mines that groups gold producers, said their offer would include proposals to tackle employee debt, an issue linked to high wage demands.

"The social compact will include sharing the gains if the gold price goes up and if the price goes down, sharing the pain," she said. "We don't need schemes. Gold mining wage talks set to begin in two weeks:Tuesday 9 June 2015. Unions representing gold miners are calling for better wages. 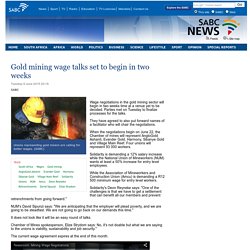 Wage talks in gold mining industry to commence:Monday 8 June 2015. Amcu is threatening to go on strike action if its demands are not met. 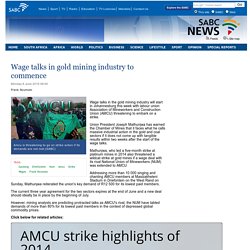 (SABC) Wage talks in the gold mining industry will start in Johannesburg this week with labour union Association of Mineworkers and Construction Union (AMCU) threatening to embark on a strike. Union President Joseph Mathunjwa has warned the Chamber of Mines that it faces what he calls massive industrial action in the gold and coal sectors if it does not come up with tangible results within two weeks after the start of the wage talks. Mathunjwa, who led a five-month strike at platinum mines in 2014 also threatened a wildcat strike at gold mines if a wage deal with its rival National Union of Mineworkers (NUM) was extended to AMCU Addressing more than 10 000 singing and chanting AMCU members at Masizakheleni Stadium in Driefontein on the West Rand on Sunday, Mathunjwa reiterated the union's key demand of R12 500 for its lowest paid members.

Click below for related articles: AMCU strike highlights of 2014, by sabcnewsonline. NUM signs groundbreaking wage deal at Goldfields:Friday 10 April 2015. There is also a big hike in the housing allowance and living out allowance from R 2 000 to R 3 500 a month. 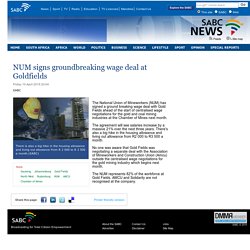 Gold mining sector salary negotiations to continue :Sunday 25 August 2013. On Thursday, NUM and Uasa rejected the chamber's revised offer and were issued a certificate of non-resolution. 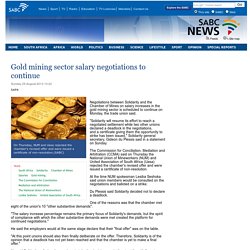 (SABC) Negotiations between Solidarity and the Chamber of Mines on salary increases in the gold mining sector is scheduled to continue on Monday, the trade union said. "Solidarity will resume its effort to reach a negotiated settlement while two other unions declared a deadlock in the negotiations, and a certificate giving them the opportunity to strike has been issued," Solidarity general secretary, Gideon du Plessis said in a statement on Sunday.

The Commission for Conciliation, Mediation and Arbitration (CCMA) said on Thursday the National Union of Mineworkers (NUM) and United Association of South Africa (Uasa) rejected the chamber's revised offer and were issued a certificate of non-resolution. Wage talks in gold mining sector to continue:Wednesday 24 July 2013. Wage talks indaba postponed:Friday 12 July 2013. The mining wage talks were meant to focus on unions motivating their demands on Friday(SABC) The laying of ground rules for negotiating in the Gold Mining sector has been postponed. 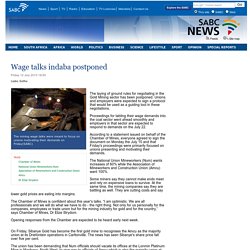 Unions and employers were expected to sign a protocol that would be used as a guiding tool in these negotiations. Proceedings for tabling their wage demands into the coal sector went ahead smoothly and employers in that sector are expected to respond to demands on the July 22. According to a statement issued on behalf of the Chamber of Mines, everyone agreed to sign the document on Monday the July 15 and that Friday's proceedings were primarily focused on unions presenting and motivating their demands. The National Union Mineworkers (Num) wants increases of 60% while the Association of Mineworkers and Construction Union (Amcu) want 100%. Some miners say they cannot make ends meet and rely on expensive loans to survive. Gold mining wage negotiations set for Tuesday:Tuesday 9 June 2015. AMCU wants a R12 500 minimum wage for entry level workers while NUM demands a 50% pay increase for entry level employees. 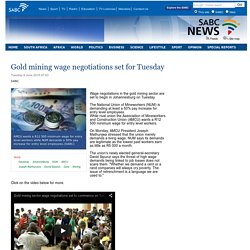 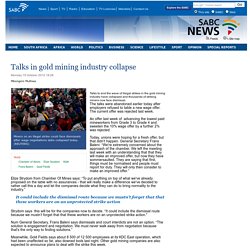 (REUTERS) Talks to end the wave of illegal strikes in the gold mining industry have collapsed and thousands of striking miners now face dismissal. The talks were abandoned earlier today after employers refused to table a new wage offer. The current offer was rejected last week. An offer last week of advancing the lowest paid mineworkers from Grade 3 to Grade 4 and sweeten the 10% wage offer by a further 2% was rejected. Today, unions were hoping for a fresh offer, but that didn't happen. Elize Strydom from Chamber Of Mines says: “To put anything on top of what we've already proposed on the table with no assurances - that will really make a difference we've decided to rather call this a day and let the companies decide what they can do to bring normality to the industry.” It could include the dismissal route because we mustn’t forget that that these workers are on an unprotected strike action.