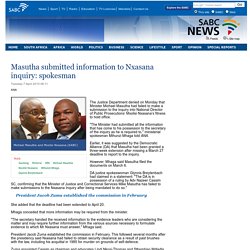 (SABC) The Justice Department denied on Monday that Minister Michael Masutha had failed to make a submission to the inquiry into National Director of Public Prosecutions’ Mxolisi Nxasana’s fitness to hold office. "The Minister had submitted all the information that has come to his possession to the secretary of the inquiry as he is required to," ministerial spokesman Mthunzi Mhaga told ANA. Earlier, it was suggested by the Democratic Alliance (DA) that Masutha had been granted a three-week extension after missing a March 27 deadline to report to the inquiry.

However, Mhaga said Masutha filed the documents on March 6. DA justice spokeswoman Glynnis Breytenbach had claimed in a statement: "The DA is in possession of a ruling by Adv Nazeer Cassim SC, confirming that the Minister of Justice and Correctional Services Mike Masutha has failed to make submissions to the Nxasana Inquiry after being mandated to do so. "

Terms of reference for NPAs Nxasana inquiry:Saturday 7 February 2015. Mxolisi Nxasana will face the NPA inquiry after being suspended last year. 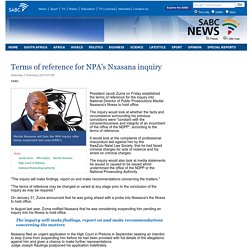 (SABC) President Jacob Zuma on Friday established the terms of reference for the inquiry into National Director of Public Prosecutions Mxolisi Nxasana's fitness to hold office. The inquiry would look at whether the facts and circumstance surrounding his previous convictions were "constant with the conscientiousness and integrity of an incumbent of the office of the NDPP", according to the terms of reference. It would look at the complaints of professional misconduct laid against him by the KwaZulu-Natal Law Society, that he had faced criminal charges for acts of violence and his arrest on criminal charges. President Zuma orders Nxasana inquiry:Friday 6 February 2015. Zuma probe into Nxasanas conduct a witch hunt: DA :Sunday 1 February 2015. Zuma to proceed with Nxasana probe:Saturday 31 January 2015. In September Mxolisi Nxasana sought an interdict to stop President Jacob Zuma from suspending him. 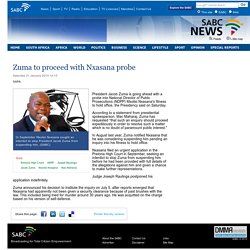 (SABC) President Jacob Zuma is going ahead with a probe into National Director of Public Prosecutions (NDPP) Mxolisi Nxasana's fitness to hold office, the Presidency said on Saturday. According to a statement from presidential spokesperson, Mac Maharaj, Zuma has requested “that such an enquiry should proceed expeditiously in order to resolve such a matter which is no doubt of paramount public interest. " In August last year, Zuma notified Nxasana that he was considering suspending him pending an inquiry into his fitness to hold office. Nxasana filed an urgent application in the Pretoria High Court in September, seeking an interdict to stop Zuma from suspending him before he had been provided with full details of the allegations against him and given a chance to make further representations. Judge Joseph Raulinga postponed his application indefinitely. 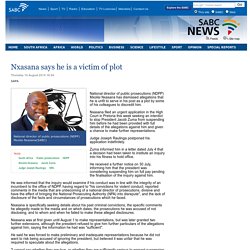 Nxasana filed an urgent application in the High Court in Pretoria this week seeking an interdict to stop President Jacob Zuma from suspending him before he had been provided with full details of the allegations against him and given a chance to make further representations. Judge Joseph Raulinga postponed his application indefinitely. Zuma informed him in a letter dated July 4 that a decision had been taken to institute an inquiry into his fitness to hold office. He received a further notice on 30 July, informing him that the president was considering suspending him on full pay pending the finalisation of the inquiry against him.

"The president's failure puts me in an untenable position. "A high court has already found me to be fit and proper. Zuma considers suspending NPA head:Friday 1 August 2014. Head of the National Prosecuting Authority (NPA), Mxolisi Nxasana. 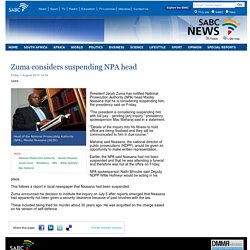 (GCIS) President Jacob Zuma has notified National Prosecution Authority (NPA) head Mxolisi Nxasana that he is considering suspending him, the presidency said on Friday. "The president is considering suspending him with full pay... pending [an] inquiry," presidency spokesperson Mac Maharaj said in a statement. Nxasana to keep his job for now:Monday 9 June 2014. A senior NPA official also alleges he was blocked from investigating a murder charge against NPA head Mxolisi Nxasana. 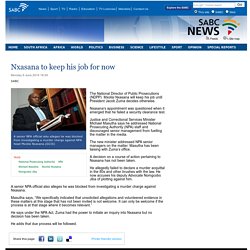 (GCIS) The National Director of Public Prosecutions (NDPP) Mxolisi Nxasana will keep his job until President Jacob Zuma decides otherwise. Nxasana’s appointment was questioned when it emerged that he failed a security clearance test. Justice and Correctional Services Minister Michael Masutha says he addressed National Prosecuting Authority (NPA) staff and discouraged senior management from fuelling the matter in the media. The new minister addressed NPA senior managers on the matter. A decision on a course of action pertaining to Nxasana has not been taken. 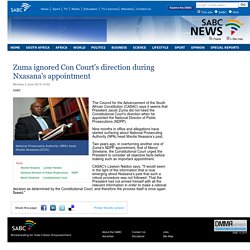 (GCIS) The Council for the Advancement of the South African Constitution (CASAC) says it seems that President Jacob Zuma did not heed the Constitutional Court's direction when he appointed the National Director of Public Prosecutions (NDPP). Nine months in office and allegations have started surfacing about National Prosecuting Authority (NPA) head Mxolisi Nxasana’s past. Two years ago, in overturning another one of Zuma's NDPP appointment, that of Menzi Simelane, the Constitutional Court urged the President to consider all objective facts before making such an important appointment.

CASAC's Lawson Naidoo says, "It would seem in the light of the information that is now emerging about Nxasana's past that such a robust procedure was not followed. Nxasana’s future hangs in the balance:Friday 30 May 2014. Recent reports indicate that NDPP head does not have the necessary security clearance and that he faces suspension. 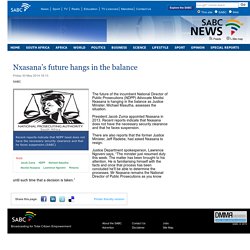 (SABC) The future of the incumbent National Director of Public Prosecutions (NDPP) Advocate Mxolisi Nxasana is hanging in the balance as Justice Minister, Michael Masutha, assesses the situation. President Jacob Zuma appointed Nxasana in 2013. Recent reports indicate that Nxasana does not have the necessary security clearance and that he faces suspension. There are also reports that the former Justice Minister, Jeff Radebe, had asked Nxasana to resign. Justice Department spokesperson, Lawrence Ngoveni says, “The minister just resumed duty this week.