Nigeria kidnap case helped to trigger fine on South Africas MTN:Friday 6 November 2015. Nigeria has been pushing industry players to verify the identity of their subscribers over worries that unregistered SIM cards were being used for criminal activity in the country. 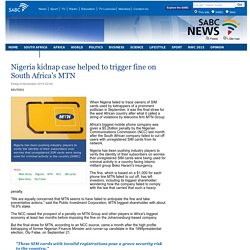 (SABC) When Nigeria failed to trace owners of SIM cards used by kidnappers of a prominent politician in September, it was the final straw for the west African country after what it called a string of violations by telecoms firm MTN Group. Africa's biggest mobile phone company was given a $5.2billion penalty by the Nigerian Communications Commission (NCC) last month after the South African company failed to cut off users with unregistered SIM cards from its network. Nigeria has been pushing industry players to verify the identity of their subscribers on worries that unregistered SIM cards were being used for criminal activity in a country facing Islamic militant group Boko Haram's insurgency. "These SIM cards with invalid registrations pose a grave security risk to the country. " MTN confirms CEO Dabengwas resignation :Monday 9 November 2015.

MTN says its CEO resigned as an honourable thing to do, not that there was any wrongdoing on his part. 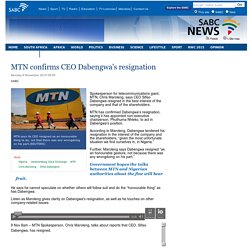 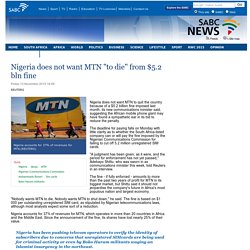 (REUTERS) Nigeria does not want MTN to quit the country because of a $5.2 billion fine imposed last month, its new communications minister said, suggesting the African mobile phone giant may have found a sympathetic ear in its bid to reduce the penalty. The deadline for paying falls on Monday with little clarity as to whether the South Africa-listed company can or will pay the fine imposed by the Nigerian Communications Commission for failing to cut off 5.2 million unregistered SIM cards.

"A judgment has been given, as it were, and the period for enforcement has not yet passed," Adebayo Shittu, who was sworn in as communications minister this week, told Reuters in an interview. MTN awaits way forward on fine:Monday 16 November 2015. The R70 billion fine saw MTN chief executive officer, Sifiso Dabengwa, resign after the news broke. 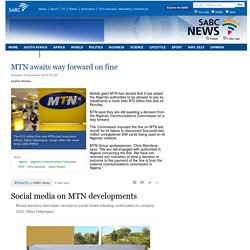 Can diplomacy save MTN in Nigeria?:Tuesday 10 November 2015. MTN has a massive presence in Nigeria – with 62.5 million subscribers – and has been a pioneer in the country’s telecommunications industry. 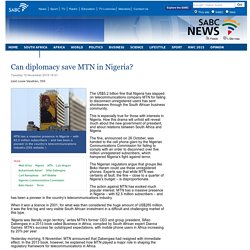 (ISS website ) The US$5.2 billion fine that Nigeria has slapped on telecommunications company MTN for failing to disconnect unregistered users has sent shockwaves through the South African business community. This is especially true for those with interests in Nigeria. How this drama will unfold will reveal much about the new government of president, and about relations between South Africa and Nigeria.

MTN shares take a dive after CEOs resignation:Monday 9 November 2015. Resignation of MTN CEO, Sifiso Dabengwa, is seen to be cause for concern. 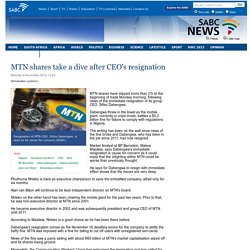 (SABC) MTN shares have slipped more than 2% at the beginning of trade Monday morning, following news of the immediate resignation of its group CEO, Sifiso Dabengwa. Dabengwa threw in the towel as the mobile giant, currently in crisis mode, battles a $5.2 billion fine for failure to comply with regulations in Nigeria. The writing has been on the wall since news of the fine broke and Dabengwa, who has been in the job since 2011, has now resigned. Market Analyst at BP Bernstein, Makoe Masilela, says Dabengwa's immediate resignation is cause for concern as it could imply that the infighting within MTN could be worse than previously thought.

He says for Dabengwa to resign with immediate effect shows that the issues are very deep. Phuthuma Nhleko is back as executive chairperson to save the embattled company, albeit only for six months. Alan van Biljon will continue to be lead independent director on MTN's board. MTN subscribers feel effects of strike:Wednesday 20 May 2015. Customers are reporting having to spend over thirty minutes to one hour on hold on MTN's 173 contact center number before they could get assistance. 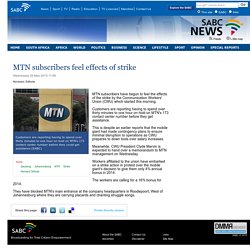 (SABC) MTN subscribers have begun to feel the effects of the strike by the Communication Workers' Union (CWU) which started this morning. Customers are reporting having to spend over thirty minutes to one hour on hold on MTN's 173 contact center number before they get assistance. This is despite an earlier reports that the mobile giant had made contingency plans to ensure minimal disruption to operations as CWU prepares to down tools over salary increases. Meanwhile, CWU President Clyde Mervin is expected to hand over a memorandum to MTN management on Wednesday. MTN assessing strike impact:Wednesday 20 May 2015.

Striking MTN employees in Johannesburg have handed a memorandum of their demands to the mobile giant's management. 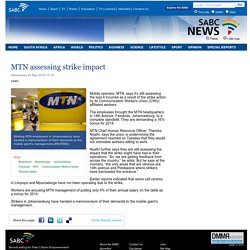 (REUTERS) Mobile operator, MTN, says it's still assessing the loss it incurred as a result of the strike action by its Communication Workers Union (CWU) affiliated workers. The employees brought the MTN headquarters in 14th Avenue, Fairlands, Johannesburg, to a complete standstill. They are demanding a 16% bonus for 2014. MTN Chief Human Resource Officer, Themba Nyathi, says the union is undermining the agreement reached on Tuesday that they would not intimidate workers willing to work. Nyathi further says they are still assessing the impact that the strike might have had in their operations. Earlier reports indicated that some call centres in Limpopo and Mpumalanga have not been operating due to the strike.

Workers are accusing MTN management of putting only 4% of their annual salary on the table as a bonus for 2014. CWU threatens to bring MTN to a total shut down:Tuesday 19 May 2015. MTN says it will be able to service customers despite the planned CWU protest action. 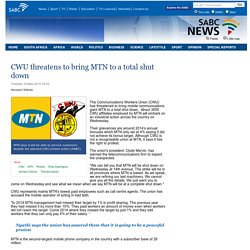