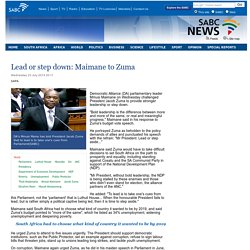 "Bold leadership is the difference between more and more of the same, or real and meaningful progress," Maimane said in his response to Zuma's budget vote speech. He portrayed Zuma as beholden to the policy demands of allies and punctuated his speech with the refrain: "Mr President: Lead or step aside... " Maimane said Zuma would have to take difficult decisions to set South Africa on the path to prosperity and equality, including standing against Cosatu and the SA Communist Party in support of the National Development Plan (NDP). "Mr President, without bold leadership, the NDP is being stalled by these enemies and those who didn't even stand for election, the alliance partners of the ANC. 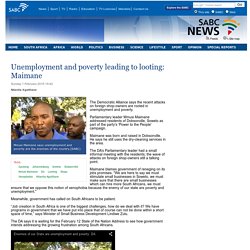 (SABC) The Democratic Alliance says the recent attacks on foreign shop-owners are rooted in unemployment and poverty. Parliamentary leader Mmusi Maimane addressed residents of Dobsonville, Soweto as part of the party's 'Power to the People' campaign. Maimane was born and raised in Dobsonville. He says he still uses the dry-cleaning services in the area. The DA’s Parliamentary leader had a small informal meeting with the residents; the wave of attacks on foreign shop-owners still a talking point. Maimane blames government of reneging on its jobs promises. Meanwhile, government has called on South Africans to be patient. “Job creation in South Africa is one of the biggest challenges, how do we deal with it? The DA says it is waiting for the February 12 State of the Nation Address to see how government intends addressing the growing frustration among South Africans. 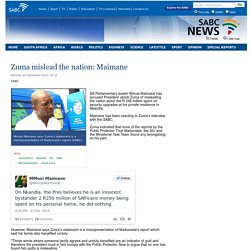 Maimane has been reacting to Zuma's interview with the SABC. Zuma indicated that none of the reports by the Public Protector Thuli Madonsela, the SIU and the Ministerial Task Team found any wrongdoing on his part. However, Maimane says Zuma's statement is a misrepresentation of Madonsela's report which said his family also benefited unduly. "Those words where someone tacitly agrees and unduly benefited are an indicator of guilt and therefore the president must in fact comply with the Public Protector. "So it is clear to me is that the interview yesterday was derived from the president not taking responsibility for the upgrades at Nkandla and we feel that he misled South Africa.

" Maimane to announce his decision on DA party leader standing:Friday 17 April 2015. Mmusi Maimane is regarded as the favourite to take over from outgoing leader and Western Cape Premier Helen Zille. 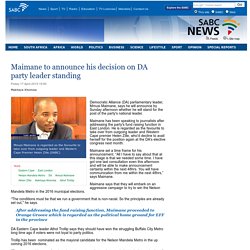 (SABC) Democratic Alliance (DA) parliamentary leader, Mmusi Maimane, says he will announce by Sunday afternoon whether he will stand for the post of the party's national leader. Maimane has been speaking to journalists after addressing the party's fund raising function in East London. He is regarded as the favourite to take over from outgoing leader and Western Cape premier Helen Zille, who'd decline to avail herself for the position again at the DA's elective congress next month. Maimane set a time frame for his announcement. Maimane says that they will embark on an aggressive campaign to try to win the Nelson Mandela Metro in the 2016 municipal elections. “The conditions must be that we run a government that is non-racial.

After addressing the fund raising function, Maimane proceeded to Orange Groove which is regarded as the political home ground for EFF in the province.