Mixed emotions as matriculants start their exams:Monday 26 October 2015. Matriculants are writing their English exam on Monday. 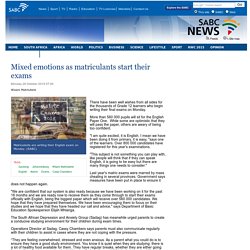 (SABC) There have been well wishes from all sides for the thousands of Grade 12 learners who begin writing their final exams on Monday. More than 560 000 pupils will sit for the English Paper One. While some are optimistic that they will pass the paper, others are weary of being too confident. "I am quite excited, it is English, I mean we have been doing it from primary, it is easy, "says one of the learners. "This subject is not something you can play with, like people will think that if they can speak English, it is going to be easy but there are many things one needs to consider.

" Last year's matric exams were marred by mass cheating in several provinces. "We are confident that our system is also ready because we have been working on it for the past 18 months and we are ready now to receive them as they come through to start their exams officially with English, being the biggest paper which will receive over 560 000 candidates. All systems go for W Cape matric class of 2015 :Monday 26 October 2015. Matriculants are writing their English exam on Monday. 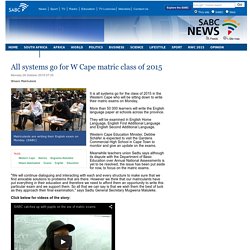 (SABC) It is all systems go for the class of 2015 in the Western Cape who will be sitting down to write their matric exams on Monday. More than 50 000 learners will write the English language paper at schools across the province. They will be examined in English Home Language, English First Additional Language and English Second Additional Language. Western Cape Education Minister, Debbie Schäfer is expected to visit the Gardens Commercial High School in Cape Town to monitor and give an update on the exams.

Meanwhile teachers union Sadtu says although its dispute with the Department of Basic Education over Annual National Assessments is yet to be resolved, the issue has been put aside for now, to focus on the matric exams. "We will continue dialoguing and interacting with each and every structure to make sure that we find amicable solutions to problems that are there. Class of 2014 results drop 2.4 percentage points:Monday 5 January 2015. Basic Education Minister Angie Motshekga announcing matric results in Johannesburg on Monday. 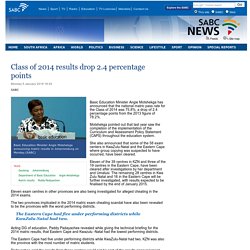 (SABC) Basic Education Minister Angie Motshekga has announced that the national matric pass rate for the Class of 2014 was 75.8%, a drop of 2.4 percentage points from the 2013 figure of 78.2%. Motshekga pointed out that last year saw the completion of the implementation of the Curriculum and Assessment Policy Statement (CAPS) throughout the education system. She also announced that some of the 58 exam centers in KwaZulu-Natal and the Eastern Cape where group copying was suspected to have occurred, have been cleared. Eleven of the 39 centres in KZN and three of the 19 centres in the Eastern Cape, have been cleared after investigations by her department and Umalusi.

Eleven exam centres in other provinces are also being investigated for alleged cheating in the 2014 exams. The Eastern Cape had five under performing districts while KwaZulu-Natal had two. Click below for the full speech. Parents urged to comfort failed matric pupils:Sunday 4 January 2015. Drop in Matric pass rate was expected: Motshekga:Monday 5 January 2015. The minister of Basic Education Angie Motshekga announced 2014 matric results on Monday. 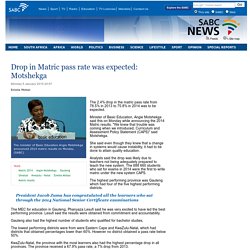 (SABC) The 2.4% drop in the matric pass rate from 78.5% in 2013 to 75.8% in 2014 was to be expected. Minister of Basic Education, Angie Motshekga said this on Monday while announcing the 2014 Matric results. "We knew that trouble was coming when we introduced, Curriculum and Assessment Policy Statement (CAPS)" said Motshekga. She said even though they knew that a change in systems would cause instability, it had to be done to attain quality education. Analysts said the drop was likely due to teachers not being adequately prepared to teach the new system. No names to be published with matric results:Tuesday 25 November 2014. Congress of South African Students President, Collin Malatji, has welcomed the decision, not to publish matric results in newspapers. 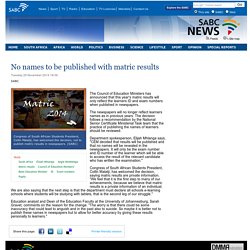 (SABC) The Council of Education Ministers has announced that this year's matric results will only reflect the learners ID and exam numbers when published in newspapers. The newspapers will no longer reflect learners names as in previous years. The decision follows a recommendation by the National Senior Certificate Ministerial Task team that the practice of publishing the names of learners should be reviewed. Department spokesperson, Elijah Mhlanga says, "CEM decided that results will be published and that no names will be revealed in the newspapers. Congress of South African Students President, Collin Malatji, has welcomed the decision, saying matric results are private information. New curriculum blamed for expected poor matric perfomance:Sunday 4 January 2015. The new CAPS curriculum has proven to be a challenge for both teachers and learners. 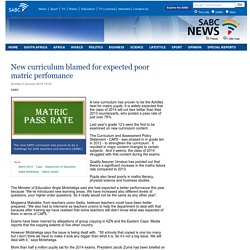 (SABC) A new curriculum has proven to be the Achilles heel for matric pupils. It is widely expected that the class of 2014 will not fare better than their 2013 counterparts, who posted a pass rate of just over 78%. Last year's grade 12's were the first to be examined on new curriculum content. The Curriculum and Assessment Policy Statement - CAPS - was phased in in grade ten in 2012 - to strengthen the curriculum. Quality Assurer Umalusi has pointed out that there's a significant increase in the maths failure rate compared to 2013. Pupils also fared poorly in maths literacy, physical science and business studies. The Minister of Education Angie Motshekga said she had expected a better performance this year because “We’ve introduced new learning areas.

Mugwena Maluleke, from teachers union Sadtu, believes teachers could have been better prepared.