This is about 8% of the total cases and total deaths from cancer. Approximately 70% of cervical cancers occur in developing countries. School girls to get cancer immunisation:Thursday 16 January 2014. Primary school girls would be immunised this year against the Human Papilloma Virus (HPV) that causes cervical cancer, President Jacob Zuma said on Thursday. 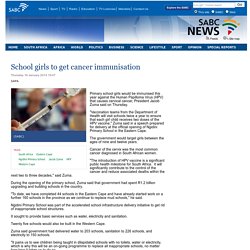 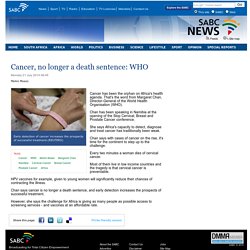 (REUTERS) Cancer has been the orphan on Africa's health agenda. That's the word from Margaret Chan, Director-General of the World Health Organisation (WHO). Chan has been speaking in Namibia at the opening of the Stop Cervical, Breast and Prostate Cancer conference. She says Africa's capacity to detect, diagnose and treat cancer has traditionally been weak. Chan says with cases of cancer on the rise, it's time for the continent to step up to the challenge.

Every two minutes a woman dies of cervical cancer. Most of them live in low income countries and the tragedy is that cervical cancer is preventable. HPV vaccines for example, given to young women will significantly reduce their chances of contracting the illness. Chan says cancer is no longer a death sentence, and early detection increases the prospects of successful treatment. Madiba-Zuma calls for fight against cancer:Wednesday 20 May 2015. First Lady Tobeka Madiba-Zuma addressed an audience of mainly students at the University of Johannesburg's Kingsway campus on Tuesday night on her campaign "Stop Cervical, Breast and Prostate Cancer in Africa. 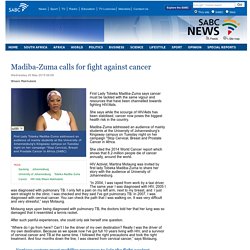 (SABC) First Lady Tobeka Madiba-Zuma says cancer must be tackled with the same vigour and resources that have been channelled towards fighting HIV/Aids. She says while the scourge of HIV/Aids has been stabilised, cancer now poses the biggest health risk in the country. Madiba-Zuma addressed an audience of mainly students at the University of Johannesburg's Kingsway campus on Tuesday night on her campaign "Stop Cervical, Breast and Prostate Cancer in Africa.

She cited the 2014 World Cancer report which shows that 8.2-million people die of cancer annually, around the world. HIV Activist, Martina Motaung was invited by first lady Tobeka Madiba-Zuma to share her story with the audience at University of Johannesburg. “In 2004, I was raped from work by a taxi driver. IFP encourages cervical cancer testing:Friday 5 September 2014.

The IFP also encouraged men to get tested for prostate cancer. 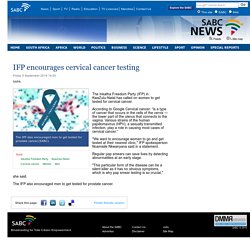 (SABC) The Inkatha Freedom Party (IFP) in KwaZulu-Natal has called on women to get tested for cervical cancer. According to Google Cervical cancer: “is a type of cancer that occurs in the cells of the cervix — the lower part of the uterus that connects to the vagina. Various strains of the human papillomavirus (HPV), a sexually transmitted infection, play a role in causing most cases of cervical cancer.”

"We want to encourage women to go and get tested at their nearest clinic," IFP spokesperson Ncamisile Nkwanyana said in a statement. KZN launches cervical cancer testing campaign :Wednesday 10 April 2013. Women are encouraged to get tested for cervical cancer. 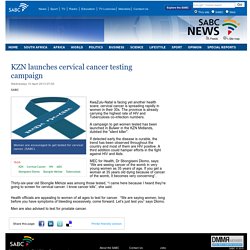 (SABC) KwaZulu-Natal is facing yet another health scare; cervical cancer is spreading rapidly in women in their 30s. The province is already carrying the highest rate of HIV and Tuberculosis co-infection numbers. A campaign to get women tested has been launched in Bulwer in the KZN Midlands, dubbed the "silent killer". New home test kit for cervical cancer launched:Tuesday 6 August 2013. At least 6 000 South African women are diagnosed with cervical cancer each year. 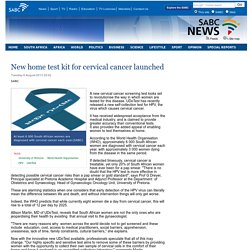 (SABC) A new cervical cancer screening test looks set to revolutionise the way in which women are tested for this disease. UDoTest has recently released a new self-collection test for HPV, the virus which causes cervical cancer. It has received widespread acceptance from the medical industry, and is claimed to provide greater accuracy than conventional tests. It also provides the added appeal of enabling women to test themselves at home. 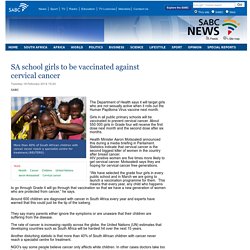 (REUTERS) The Department of Health says it will target girls who are not sexually active when it rolls out the Human Papilloma Virus vaccine next month. Girls in all public primary schools will be vaccinated to prevent cervical cancer. About 550 000 girls in Grade four will receive the first dose next month and the second dose after six months.

Health Minister Aaron Motsoaledi announced this during a media briefing in Parliament. “We have selected the grade four girls in every public school and in March we are going to launch a vaccination programme for them. Around 600 children are diagnosed with cancer in South Africa every year and experts have warned that this could just be the tip of the iceberg. They say many parents either ignore the symptoms or are unaware that their children are suffering from the disease. NGO's say some people believe cancer only affects white children.