Several high-ranking FIFA officials have been arrested on charges of corruption, money laundering, and racketeering. South Africa has been implicated in a US investigation into the adjudication of the 2010 FIFA Soccer World Cup. 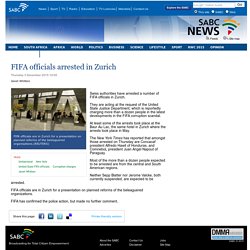 (REUTERS) Swiss authorities have arrested a number of FIFA officials in Zurich. They are acting at the request of the United State Justice Department, which is reportedly charging more than a dozen people in the latest developments in the FIFA corruption scandal. At least some of the arrests took place at the Baur Au Lac, the same hotel in Zurich where the arrests took place in May. The New York Times has reported that amongst those arrested on Thursday are Concacaf president Alfredo Hawit of Honduras, and ComneboL president Juan Angel Napout of Paraguay. Most of the more than a dozen people expected to be arrested are from the central and South American regions. Neither Sepp Blatter nor Jerome Valcke, both currently suspended, are expected to be arrested. FIFA seeking life ban for Platini, say his lawyers:Tuesday 24 November 2015. UEFA President Michel Platini (L) congratulates FIFA President Sepp Blatter after he was re-elected in this picture taken May 29, 2015(REUTERS) Former French football great Michel Platini, until recently seen as the man to lead soccer's governing body FIFA out of its worst ever graft crisis, could face a life ban from the sport if recommendations from FIFA ethics investigators are followed. 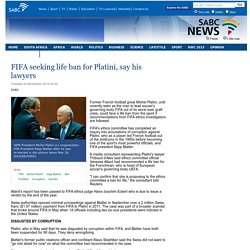 FIFA's ethics committee has completed an inquiry into accusations of corruption against Platini, who as a player led French football out of the doldrums in the 1980s before becoming one of the sport's most powerful officials, and FIFA president Sepp Blatter. A media consultant representing Platini's lawyer Thibaud d'Ales said ethics committee official Vanessa Allard had recommended a life ban for the Frenchman, who is head of European soccer's governing body UEFA. "I can confirm that she is proposing to the ethics committee a ban for life," the consultant told Reuters. Blatter may seek to stay as FIFA boss:Sunday 14 June 2015. The report comes less than two weeks after Sepp Blatter resigned as head of the world soccer organisation. 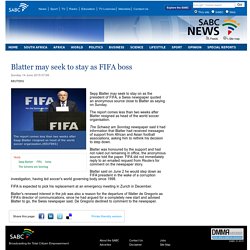 (REUTERS) Sepp Blatter may seek to stay on as the president of FIFA, a Swiss newspaper quoted an anonymous source close to Blatter as saying on Sunday. The report comes less than two weeks after Blatter resigned as head of the world soccer organisation. The Schweiz am Sonntag newspaper said it had information that Blatter had received messages of support from African and Asian football associations, asking him to rethink his decision to step down. Blatter was honoured by the support and had not ruled out remaining in office, the anonymous source told the paper.

Blatter said on June 2 he would step down as FIFA president in the wake of a corruption investigation, having led soccer's world governing body since 1998. FIFA dismayed as Interpol suspends 20 million euro Integrity pact:Friday 12 June 2015. FIFA agreed in 2011 to give Interpol 20 million euros to fund a 10-year programme to tackle match-rigging and illegal gambling. 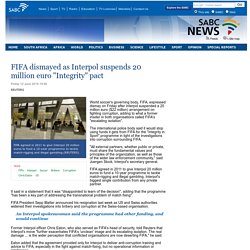 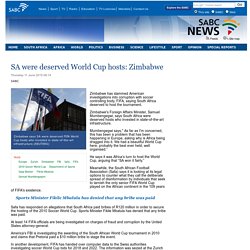 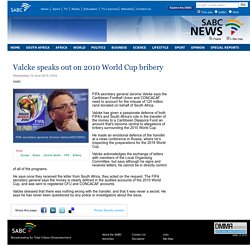 FIFA scandal splits former star players in Brazil:Wednesday 10 June 2015. Jose Maria Marin was one of seven FIFA executives jailed in Switzerland late last month(REUTERS) The arrest of one former Brazilian soccer boss, and an investigation into at least one other, has divided some of the country's footballing giants. 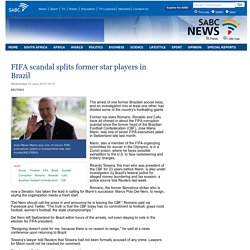 Former top stars Romario, Ronaldo and Cafu have all chimed in about the FIFA corruption scandal since the former head of the Brazilian Football Confederation (CBF), Jose Maria Marin, was one of seven FIFA executives jailed in Switzerland late last month. Marin, also a member of the FIFA organizing committee for soccer in the Olympics, is in a Zurich prison, where he faces possible extradition to the U.S. to face racketeering and bribery charges.

Ricardo Teixeira, the man who was president of the CBF for 23 years before Marin, is also under investigation by Brazil's federal police for alleged money laundering and tax evasion, a police source told Reuters last week. Teixeira and Del Nero could not be reached for comment. FIFA to elect Blatter successor on Dec 16 :Wednesday 10 June 2015. FIFA president Sepp Blatter is intent on staying in office until his successor is appointed. 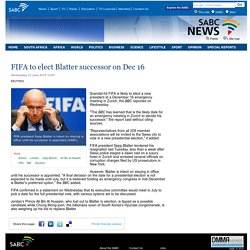 (SABC) Scandal-hit FIFA is likely to elect a new president at a December 16 emergency meeting in Zurich, the BBC reported on Wednesday. "The BBC has learned that is the likely date for an emergency meeting in Zurich to decide his successor," the report said without citing sources. New claims point Morocco as actual 2010 bid winners:Monday 8 June 2015. Reports say video footage with evidence about Morocco being 2010 World Cup bid winners was handed to FIFA five years ago(REUTERS) New claims have emerged that Morocco actually won the bid to host the 2010 Soccer World Cup, even though South Africa was announced the winner. 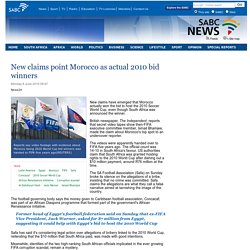 British newspaper, The Independent, reports that secret video tapes show then-FIFA executive committee member, Ismail Bhamjee, made the claim about Morocco's top spot to an undercover reporter. The videos were apparently handed over to FIFA five years ago. The official count was 14-10 in South Africa's favour. US authorities claim that South Africa was granted hosting rights to the 2010 World Cup after dishing out a $10 million payment, around R76 million at the time. Unanswered FIFA questions for Danny Jordaan:Sunday 31 May 2015. Safa president Danny Jordaan has denied that the money was a bribe for FIFA officials, as alleged by US prosecutors. 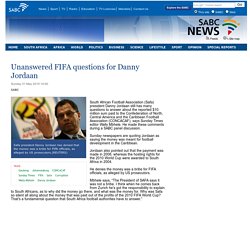 (REUTERS) South African Football Association (Safa) president Danny Jordaan still has many questions to answer about the reported $10 million sum paid to the Confederation of North, Central America and the Caribbean Football Association (CONCACAF), says Sunday Times editor Wally Mbhele. He made these comments during a SABC panel discussion. Several FIFA suspects want bail on health grounds -TagesAnzeiger:Saturday 30 May 2015. Swiss police arrested some of the most powerful figures in global soccer on Wednesday(REUTERS) Several of the seven soccer officials arrested in Zurich on corruption charges in an investigation linked to FIFA are requesting bail on health grounds, Swiss newspaper TagesAnzeiger reported on Saturday.

The men in question, who are facing extradition to the United States following their arrest on Wednesday, have said they are too old and not fit enough to remain in detention, the Swiss daily reported, without attributing the information to a source. A representative for the Swiss Federal Office of Justice could not be reached immediately for comment outside of office hours. The seven individuals, who include FIFA Vice President Jeffrey Webb and the head of Costa Rica's soccer federation, Eduardo Li, are being held at undisclosed detention centres. All are contesting their extradition from Switzerland. Undeterred by arrests, soccer boss Blatter plots another great escape:Saturday 30 May 2015.

Re-elected FIFA President Sepp Blatter gestures during news conference after an extraordinary Executive Committee(REUTERS) FIFA president Sepp Blatter is a master of getting out from tight corners and his federation's initial reaction to Wednesday's extraordinary events in Zurich suggested he has every intention of pulling off another great escape. Soccer's governing body was thrown into disarray when several of its leading officials, including vice-president Jeffrey Webb, were arrested in a dawn raid at the luxury lakeside hotel which for years has pampered FIFA visitors. They were detained pending extradition to the United States where they face federal corruption charges. Swiss authorities also opened criminal proceedings against individuals on suspicion of mismanagement and money laundering related to the allocation of the 2018 and 2022 FIFA soccer World Cups to Russia and Qatar.

Battered but unbowed, Sepp Blatter was re-elected president of FIFA for a fifth term on Friday. (REUTERS) Despite the storm raging in world soccer, the show must go on and Canada and England met in a women's friendly in front of a passionate sell out crowd on Friday that offered hope the game can survive its latest crisis. Deflated and weary from a week of shocking scandals triggered by a US investigation into allegations of rampant corruption, fans tuned out the controversy and slipped into national team jerseys, filling Tim Horton Field and soaking up the passion of two teams preparing for the Women's World Cup that will kick off in Edmonton on June 6.

"For these women, it is not about the money, it's about the game, it renews your faith," said England supporter Kevin Mackowski. Blatter wins fifth term as FIFA President:Friday 29 May 2015. FIFA President, Sepp Blatter has given a rather rambling Thank-you speech after the election result was formally announced. (FIFA TV) Sepp Blatter has, as expected, been re-elected for a fifth term as FIFA president - the most powerful organisation in world sport. The vote has taken place at the 65th FIFA Congress in Zurich, after a turbulent 48 hours that has seen a number of FIFA executives arrested on bribery and racketeering. In the first round of voting, there were three votes that didn't count, and of the remaining 206, Blatter won 133. That was just short of the two thirds majority required, and the second vote was called. In announcing his withdrawal, Prince Ali thanked those who he described as brave enough to vote for him. The US whistleblower incentives behind FIFA corruption scandal :Friday 29 May 2015.

Platini puts FIFA politics aside to remember Heysel deaths:Friday 29 May 2015. UEFA President Michel Platini (R) and Prince Ali bin Al Hussein of Jordan, FIFA presidential candidate, do a Handshake(REUTERS) Michel Platini set FIFA politics aside for a while on Friday, the 30th anniversary of the Heysel Stadium disaster when 39 mostly Italian fans lost their lives at the 1985 European Cup final. Platini, now president of European soccer's governing body UEFA and sitting at the top table as a vice-president at FIFA's Congress, scored the winning goal from a penalty that night in Brussels where Juventus beat Liverpool 1-0.

The match went ahead despite the deaths before the game at the dilapidated stadium where Liverpool fans caused the tragedy by charging at the Juventus supporters before kickoff, causing a wall to collapse and many fans to fall and suffocate. SA paid no bribe: Mbeki:Friday 29 May 2015. Former President Thabo Mbeki says he wasn't aware of anybody who solicited any such bribe from the South African government. US prosecutors defend jurisdiction in FIFA indictment :Thursday 28 May 2015. Shame and humiliation brought on FIFA: Blatter:Thursday 28 May 2015. Africans opposed to FIFA elections postponement:Thursday 28 May 2015. SAFA mum on 2010 bribery claims:Thursday 28 May 2015. SAFA President, Danny Jordaan. Time for Blatter to go: Australian former FIFA official:Thursday 28 May 2015. FIFA was plunged into crisis on Wednesday, two days before Blatter stands for re-election for a fifth term.