Related articles: Taxi accidents. RTMC has no public data on road traffic accidents:Wednesday 24 December 2014. 677 people have died on the country's roads since the beginning of December, resulting from 539 crashes. 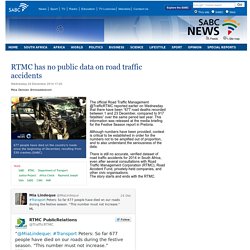 (SABC) The official Road Traffic Management @TrafficRTMC reported earlier on Wednesday that there have been “677 road deaths recorded between 1 and 23 December, compared to 917 fatalities” over the same period last year. This information was released at the media briefing for the Festive Season report in Pretoria. Although numbers have been provided, context is critical to be established in order for the numbers not to be amplified out of proportion, and to also understand the seriousness of the data. There is still no accurate, verified dataset of road traffic accidents for 2014 in South Africa, even after several consultations with Road Traffic Management Corporation (RTMC), Road Accident Fund, privately-held companies, and other civic organisations. 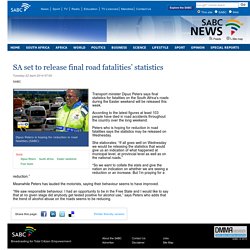 (SABC) Transport minister Dipuo Peters says final statistics for fatalities on the South Africa's roads during the Easter weekend will be released this week. According to the latest figures at least 103 people have died in road accidents throughout the country over the long weekend. Peters who is hoping for reduction in road fatalities says the statistics may be released on Wednesday. She elaborates: “If all goes well on Wednesday we would be releasing the statistics that would give us an indication of what happened at municipal level, at provincial level as well as on the national roads.”

“So we want to collate the stats and give the nation an indication on whether we are seeing a reduction or an increase. Meanwhile Peters has lauded the motorists, saying their behaviour seems to have improved. “We saw responsible behaviour. Festive season road deaths escalate: RTMC :Wednesday 28 December 2011. Road accidents have claimed more than 1000 lives since December 1. 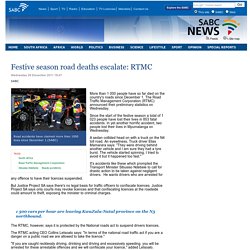 (SABC) More than 1 000 people have so far died on the country's roads since December 1. The Road Traffic Management Corporation (RTMC) announced their preliminary statistics on Wednesday. Since the start of the festive season a total of 1 023 people have lost their lives in 853 fatal accidents. In yet another horrific accident, two people lost their lives in Mpumalanga on Wednesday. A sedan collided head on with a truck on the N4 toll road. It's accidents like these which prompted the Transport Minister Sibusiso Ndebele to call for drastic action to be taken against negligent drivers. But Justice Project SA says there's no legal basis for traffic officers to confiscate licences. 1 500 cars per hour are leaving KwaZulu-Natal province on the N3 northbound. Buses, taxis on SA roads to be checked after fatal accidents :Wednesday 31 August 2011. 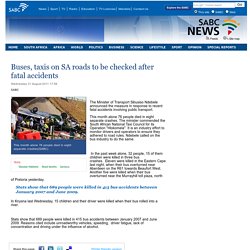 This month alone 76 people died in eight separate crashes. The minister commended the South African National Taxi Council for its Operation "Hlokomela". It is an industry effort to monitor drivers and operators to ensure they adhered to road rules. Ndebele called on the bus industry to do the same. In the past week alone, 32 people, 15 of them children were killed in three bus crashes. Stats show that 689 people were killed in 415 bus accidents between January 2007 and June 2009. In Knysna last Wednesday, 15 children and their driver were killed when their bus rolled into a river.